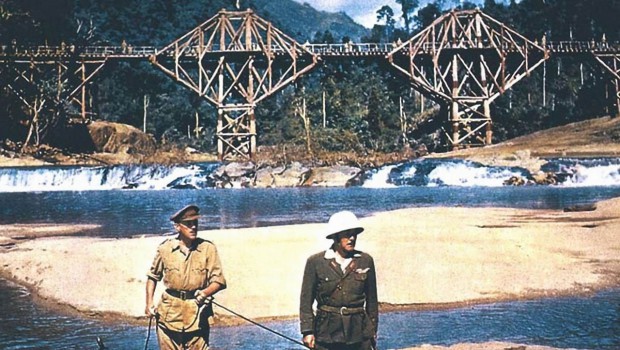 In David Lean’s classic 1957 motion picture, “The Bridge on the River Kwai,” the story unfolds in a Japanese prisoner-of-war camp in Burma in 1943. A battle of wills rages between a Japanese Colonel named Saito and a newly arrived British Colonel named Nicholson, played brilliantly by the late Alec Guinness. Saito insists that Nicholson as well as his men build a bridge over the River Kwai which will be used to transport Japanese troops and munitions. Nicholson refuses on the grounds that officers do not do manual labor despite all the “persuasive” devices at Saito’s disposal.

Finally, after breaking the psychological will of Saito who relents and agrees that Nicholson and his officers will not do manual labor, Nicholson agrees to build the bridge, not so much to cooperate with his captors but to provide a morale-boosting project for his own military engineers under his command.

In doing so, Colonel Nicholson will prove that by building a better bridge than Colonel Saito’s men, the British soldier is a far superior being even when under the thumb of his enemy. However, as the bridge goes up, Nicholson becomes obsessed with completing it to perfection, eventually losing sight of the fact that in the end, no matter how well built the bridge is, it will only benefit the Japanese. Nicholson’s acts in fact was collusion with the enemy due to his false ego.

Meanwhile, an American POW named Shears, who had escaped from the camp, later agrees to save himself from a court martial by leading a group of British commandos back to the POW camp again with a mission to blow up Nicholson’s bridge. After all, the world was at war.

Upon his return, in the film’s thrilling final sequence, at the moment when Shears as well as Nicholson confront each other before they both die, Shears suddenly realizes that Nicholson’s mania to complete his project has driven him mad.

In a sense, this whole material world is like that. Indeed, most people, as the Vedas declare are living a life of madness, their minds stolen by illusion. This is ever so apparent in today’s anxiety ridden, high-tech electronic world where more and more it seems we are heading full speed ahead toward a nuclear holocaust. Everywhere one turns it seems that the material energy is getting more intense. War, terrorism, diseases, global calamities, a devastatingly bad economy, famine and unavoidable death. All the things that were vividly explained to us in the Srimad-Bhagavatam is right before our very eyes. Yet, for most of us we go about our daily business without any thought to our eternal soul yet, at any moment, death awaits us.

This is madness. A new kind of madness that has permeated the atmosphere like a mist and seems to have taken on epic proportions since the disappearance of HDG A.C. Bhaktivedanta Swami Prabhupada who risked everything at a very advanced age to bring us knowledge of the eternal soul and the temporal nature of embodied life. In short, Srila Prabhupada’s mission was to save us from the misery of birth and death. And many times he has warned us against this madness and to be very wary of the shackles imposed by Maya who is also extremely clever. This is her job.

We must also be vigilant and guard against this new madness that is rearing its ugly head in the name of so many “isms” to continually throw us into illusion. The illusion that there is no God or worse, that Krsna is not God. We must also guard against this madness from entering the ISKCON movement that devotees hold very near and dear. It is a fact that the ISKCON movement is Srila Prabhupada and Lord Caitanya Mahaprabhu’s heart, and it is a fact that it will endure and be defined as each generation imbibes it’s great transcendental teachings to contemplate the deep meaning and realizations of Srila Prabhupada’s truly amazing purports. That this madness can penetrate a transcendental movement is not unusual. 5,000 years ago in the village of Vrndavana many demons disturbed the devotees only to be killed by Krishna in the end. And like mother Yasoda who was always in anxiety about Krsna’s welfare, we also must be in transcendental anxiety about nurturing and protecting this ISKCON movement and the tenets of Vaisnavism, the only real “ism.” This may sound naïve and many religious movements have their ups and downs. For some, the reasons may even be valid.

Since Srila Prabhupada’s disappearance in 1977 many words have been spoken and many books have been written extolling the glories of Srila Prabhupada’s magnificent achievements which are indeed vast. Thus, I am not so much writing this brief perspective to give the devotees endless quotes from sastra (as devotees who truly love Srila Prabhupada know what he said and who he really was) but rather, this is a clarion call from the heart at what I see as a new kind of madness that is permeating the atmosphere of this Kali-yuga. This is to be expected. Kali-yuga is a dark age with the only light being this Krishna consciousness movement. This is the movement we have all been waiting for.

However, in my opinion, this Krishna consciousness movement has been suppressed by government leaders (as well as others) around the world and especially in America for the last 40 years because deep within their hearts they would like to kill Krishna and His devotees. They, the atheistic class of men and women are hell-bent on subverting ISKCON’s efforts and are in fact the modern day Kamsas in modern dress and make no mistake about it, those who wield great power behind closed doors and whose only intent is greed, death and destruction will continue to do anything and everything to suppress and crush any true religious movement that tries to bring the Absolute Truth, Lord Sri Krishna to the masses to awaken their latent God consciousness. Or, to quote an old adage, the weed sometimes comes as a flower.

Therefore, I find it very disheartening when I read and hear about the “inner turmoil” that has plagued ISKCON these past 40 years. Yes, many devotees went into grief at the disappearance of Srila Prabhupada. There were disagreements amongst godbrothers and godsisters, then the poison theory, fallen gurus, distrust of the GBC authority, the child abuse scandals, the ritvik and “no fall” theories and more recently, questioning the Srimad-Bhagavatam’s conclusive statements. But perhaps for me, the most devastating development over the past several years is that some brilliant senior devotees have gone off into different camps as it were rather than combining forces to push this ISKCON movement forward. Even to go so far as to dissuade other seekers on the path to “come over” and join their camp. We must try to work harmoniously to bring about real change in this world. I believe this was also Srila Prabhupada’s desire. This may be a trick of Maya as well because to divide and conquer is the goal of these modern day demons.

It saddens me that devotees are unable to unite as one major force but remain scattered. Many of us who claim to be “Krishna devotees” should come together to heal our wounds and differences and become more tolerant and work as one vital force for the propagation of Lord Caitanya’s sankirtana movement which the world desperately needs right now.

For many of Srila Prabhupada’s senior disciples and followers, time is running out. Our bodies are getting older and we must pass on this ISKCON movement to those future generations to carry the torch as it were. We cannot pass on a movement that is dysfunctional.

Therefore, this is a heartfelt request that we all, as devotees of Krishna and our spiritual master, whomever he or she may be, pray very deeply for the upliftment of mankind and to give us the courage and strength to somehow induce people that the only real remedy for suffering humanity, in the final analysis, is the chanting of the Lord’s holy names. Hare Krsna, Hare Rama which is the only true religion for this age and the only remedy from the disease of madness.