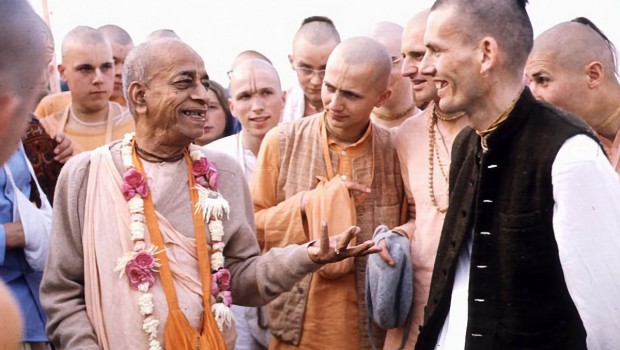 So many groups have sprung up under the generic title “Hare Krishna”, but the origin of the Hare Krishna Movement was Srila Prabhupada (His Divine Grace A.C. Bhaktivedanta Swami) and his books.

Why do we call ourselves The Bhaktivedantas? So many groups have sprung up under the generic title “Hare Krishna”, but the origin of the Hare Krishna Movement was Srila Prabhupada (His Divine Grace A.C. Bhaktivedanta Swami) and his books. http://www.bhaktivedantas.com/ART_WSP/bhaktivedantas.html
A sampling of Front Page stories:
Nefarious Works: the Cause of 911 World Trade Center Disaster
extract from an essay by His Divine Grace A.C. Bhaktivedanta Swami, Pre-1968
[Referring to Proof of the Demolition of WTC 1, 2, 6, 7 by Internal Explosives
by Alexander James (11 July 2004)
This expose lays to rest the conspiracy theory advanced by Bush, Sharon & their cronies that Arab hijackers caused the collapse of WTC 1, 2, 6, 7. The empirical scientific research explained in this document brings out the truth that these buildings collapsed due to internal explosives.]

This surrendering process is rejected by a class of people who are known as the asuras. The asuras are vividly described in the Bhagavad-gita, and the people of modern society corroborate exactly to the description of portion of Bhagavad-gita. The mode of work adopted by the asuras are sure to bring in disaster upon the world. The asuras of modern age have already been successful in bringing out a disaster of all descriptions upon the earth. The general mass of people are suffering heavily for the leaders’ misdeeds http://www.bhaktivedantas.com/NEWS/wtc911.html

Globalization in the Face of Disparity
by His Divine Grace A.C. Bhaktivedanta Swami
We must know the present need of human society. And what is that need? Human society is no longer bounded by geographical limits to particular countries or communities. Human society is broader than in the Middle Ages, and the world tendency is toward one state or one human society. http://www.bhaktivedantas.com/ART_WSP/prefSB.html