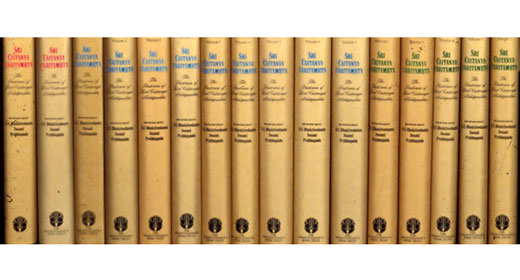 Srila Prabhupada stressed so much to Radhavallabha Prabhu, the production manager at the BBT when Sri Caitanya-caritamrta was first printed, that once this book was printed they could not change anything. Of course Prabhupada did not want changes made to any of his books but he very strongly forbade the BBT from making any changes at all to his Caitanya-caritamrta once it was printed. Prabhupada forced them to print it very quickly and they wanted to add new paintings and ‘finish’ paintings that were already in the book after it was printed… Mithiladhisa Prabhu, a friend of Radhaballabha, relates the situation as follows:

“Soon after the intense marathon for completing the publication of Caitanya Caritamrita, Radhaballabha Prabhu approached Srila Prabhupada and mentioned that the artists are now completing the paintings in preparation for the second printing. To this, Srila Prabhupada replied “No changes”.  A further attempt was made to explain, stating that there were to be no actual changes, but that the same painting would simply be completed because there was insufficient time during the marathon, and that the paintings were actually published in an unfinished state. Srila Prabhupada replied to him again, “NO changes”.

“Confused by Srila Prabhupada’s previous responses, Radhaballabha again tried to explain the situation. The short time frame of the publication marathon had prevented the paintings from being completed. They were now to be finished by the artists, re-photographed and in the next printing, the same picture, same size, everything the same except for the finishing touches, would be placed in the exact same spot in the book. Srila Prabhupada now appeared angered and replied again, but this time more forcefully, “NO CHANGES!!!”.

Please download and save and read the seventeen volumes of Srila Prabhupada’s original 1974 Sri Caitanya-caritamrta below!