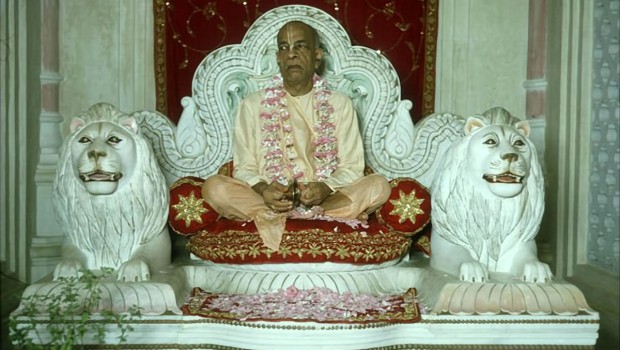 One interesting subject that has brought to my attention by a few devotees is the performance of kirtan. A few months back Brahmananda had visited us here and had mentioned how the kirtans were a lot different in the early days in the the sense that the melody was very simple.

Today devotees sing many varieites of melodies coming from various sources. There are two opinions on the matter both of which I can see as valid yet one opinion I now tend to lean more towards. On one hand “there are no hard and fast rules for chanting Hare Krishna”, and thus devotees are inclined towards the “variety is the mother of enjoyment” idea while introducing many varieties of melodies, some Bengali, some made up etc. On the other hand kirtan can be taken very scientifically with consideration of the appropriate ragas, etc. One major position on this side is assertion that it is best to focus exclusively on the melodies, mood and sound vibration given to us directly by our spiritual master Srila Prabhupada.

[In relation to recording the ‘Govindam’ album in London with George Harrison, 1970] “Regarding the presentation of “Govindam” as well as other mantras, the vibration is always pure. I will give the theme and if the sound is Westernized that does not matter. But another point is that this specific sound of Kirtana as I sing is also another introduction of art that can be intermingled with Western art and such a combination will certainly be appreciated. But so far I know that the Kirtana tune is a specific representation of the Gaudiya Vaisnavas and this tune is appreciated all over India as unique. They say that the Kirtana tune is the specific gift of Bengal, and that is a fact. So why not utilize this tune in the Western countries under the able guidance of such expert musician as George?”

Personally I like the tunes given by Srila Prabhupada as they are very easy to chant and the general public can very easily join in. Too much changing of the tune or complicated tunes makes it difficult for the public to catch-up the tune, so if they can’t work out the tune how can they join in? And we want them to join in the chanting of the Hare Krishna mantra and also remember the tune as well. So if we want them to remember the mantra it is better to stick to a standard tune.

But there are many “standard” ISKCON tunes that have been sung by the devotees for a very long time which are very nice. Srila Prabhupada may never have sung them, but they have become “standard” also. These tunes were sung on many of the Kirtanas in Prabhupada’s presence and those Kirtan’s were very potent and it was those Kirtana’s that caused the Hare Krishna movement to spread all over the world.

As far as I know there has never been a Kirtana party that strictly stuck to chanting only the tunes Srila Prabhupada gave us, yet still the Hare Krishna movement spread all over the world under Prabhupada’s direction. Therefore as far as I can see the cause of the spread of the Hare Krishna movement is not the tune of the Kirtana, but rather the purity of the chanters, and the very fact that they are actually out on the street and chanting Hare Krishna daily!!

It is very nice to theorize about this and that, but the real thing is we have to be out on the streets chanting Hare Krishna and distributing Srila Prabhupada’s books on a daily basis. If we actually do this sincerely that will cause the Krishna consciousness movement to spread all over the world. That is the formula Prabhupada gave us and that is also proven to work. Prabhupada never forced the devotees to only chant the tunes he chanted so how can you do that? If IRM are going out and chanting in New York 4 times a week why not join with them and increase the Kirtana’s? Locanananda Prabhu is a very expert Kirtan leader from Prabhupada’s days and I am sure his tunes are very bona fied, standard and approved by Srila Prabhupada.

But the main thing is to be pure and actually go out on to the streets on a daily basis and chant Hare Krishna and distribute Srila Prabhupada’s books. This is the formula for success, not the kirtana melodies.

3 Responses to Prabhupada Kirtan Melodies – The Formula for Success?