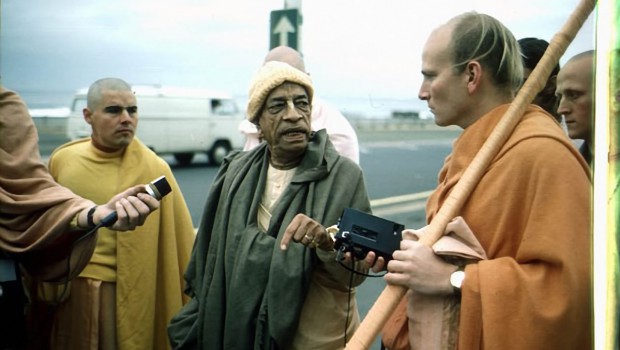 Now these Christmas holidays you have begun in your country. Throughout the whole month of December you’ll observe nice festivals, festivities. Why? Where it began? God consciousness. Lord Christ he came to give you God consciousness, and in his relationship these festivities are going on.

681202SB.LA Lectures
Therefore this Krsna consciousness movement is postgraduate position of all religions. It is not any sectarian religion. You accept Christianity–very good. You accept Muhammadanism, Islamism–very good. You accept Hinduism–that’s all right. We have no quarrel with Hindus and Muslims or Christians or Buddhists. But our objective is that religion means there is connection, relationship with God. Take, for example, Christian religion. They accept God: “God created this,” the beginning of Bible. That’s a fact. So the God consciousness is there. “God is great,” the God consciousness there. Now these Christmas holidays you have begun in your country. Throughout the whole month of December you’ll observe nice festivals, festivities. Why? Where it began? God consciousness. Lord Christ he came to give you God consciousness, and in his relationship these festivities are going on. It may be degraded in another form. The beginning is God consciousness, but we have lost it. So people cannot be happy without reviving God consciousness. It may be named in a different way–“Krsna consciousness.” That means God consciousness. That is the necessity. He’s trying to love somebody. That somebody’s love will be perfected when he loves Krsna or God. We are teaching that. Try to love God, and if you love God, if you love Krsna, then automatically you love everybody. That is the perfection of love. The example is just like if you love your stomach, if you supply nice food to your stomach, that means you love all the parts of your body. If you supply foodstuff in the stomach, the energy is distributed in all parts of the body. That means you love all parts of the body. If you love the tree, you pour water on the root and the water is distributed to the branches, fruits, flowers, leaves, everywhere.

68-11-26 Letter: Hrsikesa
Regarding the Christmas Day meal with your family, I do not think you should partake of the food prepared by non-devotees. Better you should prepare your own foodstuffs and offer to Krishna and then, if you like, you may offer these remnants to Lord Jesus. I think that Lord Jesus will also appreciate this. Of course you may sit down with your family and take fruits and milk which they offer but rather than taking the foods which they have prepared, you may prepare and offer your own prasadam for Lord Krishna, and then offer the same to Lord Jesus.

68-12-19 Letter: Uddhava
I am so happy that you are looking to your marriage with Lilasukha and she also is happy with this arrangement. On Christmas day, Hayagriva and Syama Dasi are to be married in LA and this is very encouraging because we will welcome the arrival of nice KC children to carry on this movement for which we are laying ground.

73-01-09 Letter: Karandhara
I have received your description of the books sold during three-day Christmas period, and I am very much pleased upon all of the nice boys and girls who have helped me in this way. I could never have thought it was possible to distribute so many of our literatures. Therefore I can understand it is simply Krsna’s blessing us for your sincerely working on His behalf. Actually, that is the secret of my success, not that personally I have done anything wonderful, but that because those who are helping me are sincere, they have done the work, that is the reason for our success all over the world where others have failed. A little sincerity is very difficult thing in this age of hypocrisy and bluff, but I am so fortunate that Krsna has sent me all of you nice boys and girls who are sincerely working. Please convey to all of them my deepest appreciation.

74-11-21 Letter: Kirtiraja
Please accept my blessings. I have seen your letter dated November 12, 1974 addressed to Brahmananda with enclosed samples of the Christmas cards and the calendar. The pictures are very nice. This sort of painting was done during the Muslim Moghal period. But, we don’t encourage Christmas greetings. They are nice pictures undoubtedly.

75-12-27 Letter: Ramesvara
Please accept my blessings. I am in due receipt of your telegram as follows: Christmas week book distribution in Los Angeles despite closed airport better than ever by your grace 112000 BTGS 8000 Gitas sold stop on invitation of Governor Brown of California 50 devotees visited State mental institutions to help improve conditions and morale by giving religious message publicity very good Hare Krishna. Thank you very much. This is very good.

77-01-13 Letter: Jayatirtha
The Christmas distribution in England is unimaginable. Europe is a great field for preaching. New York-Radha Damodara and Los Angeles have already accepted defeat. This transcendental competition is very encouraging. But combined together, we must defeat Maya and her influence. When the Kurus and the Pandavas used to fight, there were 100 brothers on one side, and 5 brothers on the other side. But when there was another party, then the 105 brother were together. In this way, we must cooperate to spread Krsna consciousness.

750210mw.la Conversations
Ramesvara: Just before Christmas this wall was filled up, and now it is practically empty. We have sold so many books just in a few months. All up to the ceiling it was filled up. Now we have to reprint.

770108r3.bom Conversations
Prabhupada: Every country. Whole Europe and America. What business they have got to purchase our books in Christmas? They have no business. Why they are purchasing? Huge quantity. I never dreamed even (laughs) that my books would be sold in large quantity.

770111tt.ida Conversations
Prabhupada: Krsna was proved, and still He is proved. Who is reading others’ book all over the world? Therefore He is God. Where is that book so respected as Bhagavad-gita? Who is printing so many books? Not even Bible. They respected Bible. Why the foreigners are reading Bhagavad-gita? That is the proof that Krsna is God. During the Christmas festival we sold our books greatest number in the history. How many copies Bible you have sold? That is the proof. Here is God. Otherwise why Christians should purchase Bhagavad-gita during Christmas holiday? And because Krsna is God, therefore you have come to fight. Who is going to fight with jehovah? Who is going to fight with jehovah movement?
770113rc.all Conversations
Ramesvara: Yet now there is a new controversy in America because during Christmas season our book distributors dress themselves up as Santa Claus. You’ve seen Santa Claus?…
770130rc.bhu Conversations
Gargamuni: At least the newspaper article in the Statesman was very amusing. It did not criticize, because it mentioned that by wearing these suits we are able to distribute many literatures on God consciousness, which is the real meaning of Christmas. They wrote this in the States… So it was favorable.
770130rc.bhu Conversations
Nanda-kumara: In Los Angeles there was some controversy, some trouble. So they had big signs that said “ISKCON,” and they had a thing printed up that they put on the bucket that they were collecting with. It said, “Help us put the real spirit of God back into Christmas.” And people appreciated that. It stated who we were and stated that…
770227r2.may Conversations
Prabhupada: It is all Krsna’s grace. Let us try our best sincerely, and Krsna will give us. Tesam satata-yuktanam bhajatam priti-purvakam. Otherwise how it is happening? In foreign countries, a system of philosophy which is foreign to them, how they are purchasing? In India, if they purchase one Bhagavatam, it has got meaning. But in Germany, purchasing Bhagavatam, it is only Krsna’s grace. How it is possible? And India, nobody is interested to purchase Bible. So if they purchase Bhagavatam, that is not surprising, but in Europe and America in Christmas festivities they are purchasing. So it is all Krsna’s arrangement. We sold more books in Christmas festivals.

770415rc.bom Conversations
Prabhupada: It is universal, science. It is science. So why this science is kept locket up and distorted by the leaders? If you understand one line of Bhagavad-gita, your life becomes successful. Now our leaders are supposed to read Bhagavad-gita, but who understands this one line, tatha dehantara-praptir dhiras tatra na muhyati? Nobody understands. And they are scholars of Bhagavad-gita. They cannot understand this one line in the beginning. This is going on. So I would request you to take this matter seriously and… And it is being responded. I am writing these books on Bhagavad-gita, Srimad-Bhagavatam, and we are selling daily five to six lakhs’ worth of books. In a foreign country, where their religious system is different, and during Christmas festival we are selling our books, large quantity.