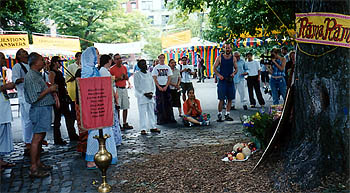 On June 19 Kapindra Swami’s Prabhupada Sankirtana Society held their annual Prabhupada Festival in Tompkins Square Park. This years festival was a grand success with over a thousand plates of prasadam and hundreds of books distributed. Everything was accompanied by the constant chanting of the Hare Krishna maha-mantra. One old resident of the Lower East Side came up to me and said he hadn’t heard chanting like this since Prabhupada was 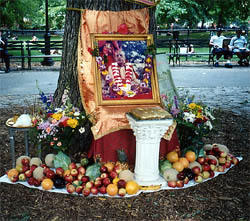 It turned out that in 1966 he used to live upstairs at 26 2nd Ave. That’s where Prabhupada started the first Hare Krishna temple in the Western world. He said he knew Srila Prabhupada was a holy man and was not hurting anyone so he did not complain about the loud chanting of the Hare Krishna mantra and Prabhupada’s followers. But the others… He said they got very upset, even to the point of calling the police many times to stop Srila Prabhupada’s chanting sessions. But, he said, “Prabhupada would not stop chanting Hare Krishna…” 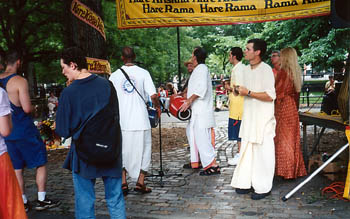 Devotees came from as far as Florida and Canada to the festival. Prabhupada’s tree was decorated beautifully by the devotees and he was offered a grand Guru-Puja by all the assembled devotees and guests. 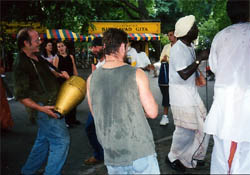 There was very ecstatic chanting of the Hare Krishna mantra by the devotees and everyone had a very good time. 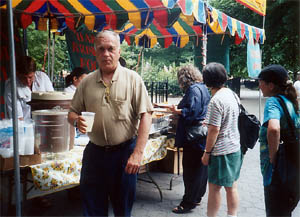 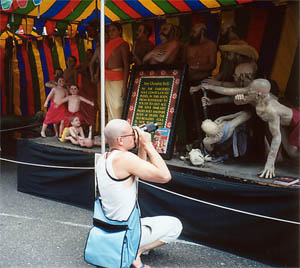 The “Changing Bodies” exhibition created a great deal of interest and many, many copies of Srila Prabhupada’s “Beyond Birth and Death” were sold. 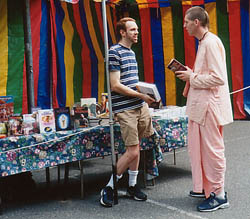 I spent most of my time at the book table and was plesently surprized to see how interested the guests were in purchasing Srila Prabhupada’s books. As far as I can see there has never been a time when the general public were more interested in Srila Prabhupada and Krishna consciousness. It’s just a great pity that we, the disciples of Srila Prabhupada, seem to be having so many difficulties working together. The people of the world are depending on us to get it together somehow and reestablish the mass book distribution, street chanting and festivals that some of them still remember from the seventies.