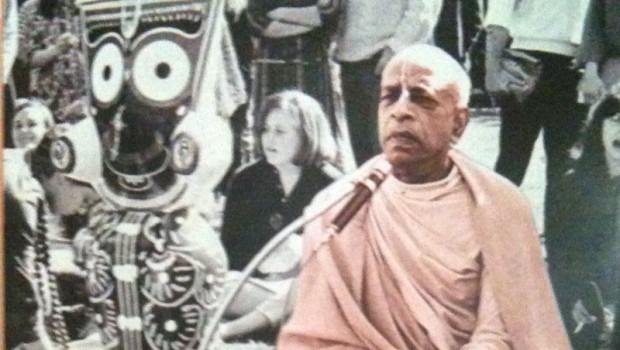 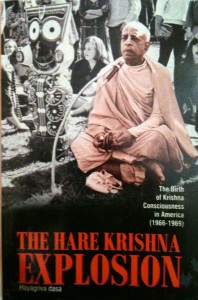 It is a wonderful story, how His Divine Grace A.C. Bhaktivedanta Swami Prabhupada came to the United States in 1965 and established the Hare Krishna Movement in the Western world. Of course there are many books by disciples of Srila Prabhupada describing this time but there is one very special book, “The Hare Krishna Explosion” by Hayagriva dasa which stands supreme above all the other books describing this amazing achievement of Srila Prabhupada.

The Hare Krishna Explosion only deals with the four year period between 1966 and 1969 and it is the only book describing these amazing pastimes of Srlla Prabhupada which was actually written at the time. Hayagriva Prabhu wrote the first draft of the Hare Krishna Explosion in July 1969, just after Srila Prabhupada’s first visit to New Vrindavan. This is my favorite book which describing how Srila Prabhupada took the Krishna Consciousness Movement to the West and I was very sad that it has been out of print now for many, many years.

Fortunately The Hare Krishna Explosion is back in print now and you can get it at:

It is a very important historical book that contains dozens of black and white photographs from the time and it is simply a wonderful, ecstatic read. You will be transported back to the 1960s and will be able to personally experience the mood and feelings of the time and you will see the amazingly personal and loving way in which Srila Prabhupada deals with his disciples.

Anyhow I really recommend that you read this book and guarantee it will inspire you in Krishna consciousness….

For more information and to order the book please go to:

From the Introduction to “The Hare Krishna Explosion”

Who  was this great master called Srila Prabhupada, and what was he like? To answer this is to answer the question Arjuna asked Lord Krishna millennia ago:

Prabhupada’s real identity defied analysis. I was surprised to learn that he had once been a pharmacist with a wife and children. Because worldly motives and passion never touched him, it was difficult to imagine him as a householder, as anything but the saffron-clad spiritual master, the paramahamsa floating over the world like a swan over water.

If you are drowning in the middle of the ocean, he said, “and someone throws you a rope, you do not stop to inquire, ‘O dear sir, why are you throwing me this rope? What is your name? What country are you from? Why are you here?’ No. The drowning man grabs the rope for dear life.”

Since we were all drowning few of us asked these questions, we grabbed the rope any way we could, assured of some ultimate victory in Vaikuntha, a faraway spiritual universe.

In the closing words of Bhagavad-gita:

And whenever there is Srila Prabhupada there will certainly be Lord Krishna.

I first see him just after crossing the Bowery at Houston Street. As he passes before the iron-mesh fence of a playground, I distinctly glimpse the aura of saintliness. I watch him through the rushing traffic and stumbling derelicts.

He strolls almost jauntily down the sidewalk. He is an old man whom age has never touched. Aloof from the people and bustle about him, he walks proudly, independently, his hand in a cloth bead-bag. He wears the saffron robes of a sannyasi, and on his feet are quaint, pointed white shoes.

Only seven months ago I had seen many saffron-robed monks and holy men walking the dirt roads of Haridwar and Hrishikesh, and stopping beside the Ganges to bathe. For me that had been a futile journey to the mystic East in search of the all-knowing guru. But now what’s this?

I look again at the pointed white shoes. Did this man follow me all the way from North India? Or did he just suddenly descend from the clouds onto Manhattan sidewalks? I decide I must speak to him.

As I start across the street, trucks rumbling towards Holland Tunnel block him from my view. I look again to make sure that he is still there. Yes, he even appears to be aware of me. He has all the bearing of a great actor in a famous movie. I can’t think of what to say, but I approach him anyway.

We both stop at once. His sudden smile is moonlight in the grey July smog.

“Are you from India?” I ask stupidly.

“Oh yes,” he says, his eyes bright and expressive. Crosstown buses roar past, billowing exhaust like clouds of incense. I sense that his tranquility is fixed in something beyond the traffic roar. “And you?” he asks.

“Achha! Calcutta!” Another smile. “I am coming from Calcutta. And you were liking India?”

“Near Mathura,” he says.

“I’m afraid not,” I say, not knowing either place. “I got sick and had to leave.”

A poor excuse, but I can think of nothing else. His large brown eyes sparkle. How old is he? His head is shaved, save for a few white hairs in back, and his complexion, golden Bengali, seems radiant against saffron robes. His presence evokes quiet ashrams nestled near the Himalayas, cows, bells, temples and holy rivers.

“You are living near here?” he asks.

“Two blocks down,” I point across Bowery. “Over on Mott Street.”

“Then we are neighbors,” he says. “I want to give some classes on Bhagavad-gita. I have this one place. I wonder if it is suitable. Maybe you can come and see?”

“Of course,” I say, and we turn and walk the half block to Second Avenue.

We stop before a small storefront between First and Second Streets, next door to a Mobil filling station, and across the street from the Red Star Bar and Gonzalez Funeral Home. Occupying half the ground floor of a four-story apartment building, the storefront had evidently served as a curio shop, for the words “Matchless Gifts” were painted over the front door.

I notice an announcement in the window: “Lectures on Bhagavad-gita. Monday, Wednesday and Friday. 7-9 p.m. A.C. Bhaktivedanta Swami.”

“Oh yes,” I say. “It surely is.” Suddenly I feel sorry for the grandfatherly gentlemen so far from home, so helpless in such an alien metropolis. “I would like to hear your lectures,” I say.

“Then you must come,” he says. Another moonlight smile.

“Yes, very good. You must bring them.”

“I will. I promise. Monday evening…”

6 Responses to The Hare Krishna Explosion!