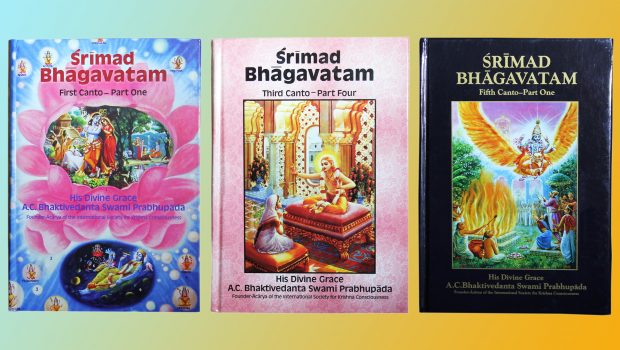 This is a true collectors edition. It is a strictly limited printing, an exact replica of the first edition of Srila Prabhupada’s Bhagavatam set printed between 1972 and 1977.

These are incredibly beautiful books with the original covers and all original color plates. It is printed on very first-class paper and the text is amazingly clear and crisp and easy to read.

I very strongly suggest you get a set now before it is sold out.

With translations and elaborate purports by His Divine Grace A.C. Bhaktivedanta Swami Prabhupada.

Srimad-Bhagavatam (Bhagavata Purana) is a virtual encyclopedia of yoga, meditation and the mystic arts. It brings together in one complete source information that previously hundreds of books could not explain.

This edition of the Bhagavatam, with elaborate commentary, is the most widely read and authoritative translation available to the English speaking world.

Scholars Praise this Edition of Srimad-Bhagavatam

“This is a work to be treasured. No one of whatever faith or philosophical persuasion who reads these books with an open mind can fail to be both moved and impressed….”

“It has been my great pleasure recently to have read the Srimad-Bhagavatam in the superb edition authorized by A.C. Bhaktivedanta Swami Prabhupada….I am sure this monumental work will go far to bring the sublime message of the Bhagavatamto numerous Westerners who otherwise would miss this opportunity. “

“The Srimad-Bhagavatam is extremely useful for all those interested in ancient India, whether their interest be that of the philosopher, the student of religion, the historian, the linguist, the sociologist or the political scientist….I truly hope that Srila Prabhupada will complete his translation of the entire Bhagavataand continue to translate other eminent Sanskrit works as well. Undoubtedly, this work of Swamiji’s is a great contribution to the troubled human society of today’s world.”

“The Bhaktivedanta Book Trust editions of famous religious classics of India, with new translations and commentaries, are an important addition to our expanding knowledge of spiritual India. The new edition of the Srimad-Bhagavatamis particularly welcome.”

“…A commentary on the Vedanta-sutraby Srila Vyasadeva divided into twelve ‘cantos’ of which four are presented here in eight beautifully produced volumes. These lavish volumes, obviously the product of devotional effort, contain many lovely full-color illustrations….”

“In the diversity of religious approaches offered by the yogis of India, the most significant, of course, is the way of Krsna consciousness. It is amazing to see how Sri Bhaktivedanta Swami has in less than ten years succeeded, by his personal devotion, untiring energy and efficient direction, in organizing the International Society for Krishna Consciousness. Now, he has undertaken the stupendous project of rendering the entire Bhagavata, the great devotional classic of India, into English. His edition is learning blended with devotional feeling and inspired by a definite purpose of communicating the intense Iyrical and devotional quality of the Bhagavata. Srila Prabhupada has done an excellent service by his able rendition of ‘the abode of divine joy’ that the Bhagavatais.”

“It is axiomatic that no book can be expected entirely to satisfy all its potential readers. Here is one, however, which can be said to come remarkably close to that ideal….we have here the ideal of what an edition of a Sanskrit text for a Western audience should be.”

“…For those who have no access to the Sanskrit language, these books convey, in superb manner, the message of the Bhagavatam.In addition to being a scholarly work, it directly reflects the spiritual aspirations of a religious community which has gained considerable popularity in modern America.”

“Srimad-Bhagavatam is a valuable source material and cannot but be attractive to serious students and scholars of religion and philosophy. I recommend this series, to anyone, as an important and useful reference work.”