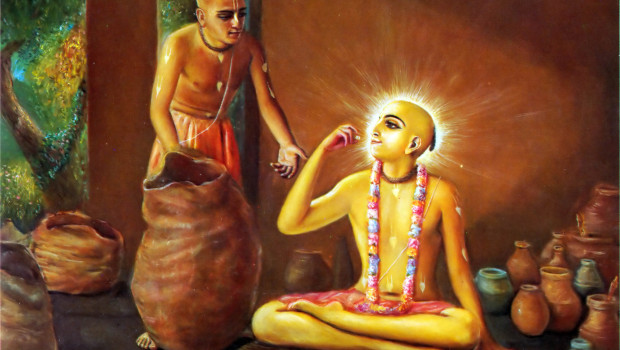 Madhavendra Puri could understand Ramacandra Puri was a great fool and so he became very angry and said, “Get out you sinful rascal!” Then he prayed to Krishna, “Oh my Lord Krishna, I could not reach You nor could I reach Your abode Mathura. I am dying in unhappiness and now this rascal has come to give me more pain.” He continued speaking to Ramacandra Puri, “Don’t show your face to me. You can go to any place you like. If I die seeing your face I will not achieve the destination of my life. I am dying without achieving the shelter of Krishna and therefore I am greatly unhappy. Now this condemned foolish rascal has come to instruct me about Brahman.” In this way Madhavendra Puri rejected Ramacandra Puri. Because of his offenses gradually material desires appeared within his heart.

If someone approaches a spiritual master simply in search of knowledge, his gain is only dry speculative knowledge, he does not get any spiritual profit. Even if one is liberated in this life, if one offends the Supreme Personality of Godhead or his devotee he falls down because of so many material desires. One who is attached to dry speculative knowledge has no relationship with Krishna. His occupation is simply to criticize Vaisnavas.

So we can see the difference between the two disciples of Madhavendra Puri. Isvara Puri, while performing such personal favorable service to his spiritual master received the blessings of his spiritual master and pure love for Krishna developed within his heart. Ultimately he got the mercy of accepting the Supreme Personality of Godhead, Lord Sri Caitanya Mahaprabhu, as his disciple. On the other hand, Ramacandra Puri, by criticizing his spiritual master, became an impersonalist Mayavadi and his occupation became criticizing the Vaisnavas.

At last, he thought he found a fault. “How can a person in the renounced order eat so many sweets?” He said, “If one eats sweets controlling the senses is very difficult.” In this way Ramacandra Puri criticized Sri Caitanya Mahaprabhu in front of everyone, however he continued to visit the Lord every day. When Sri Caitanya Mahaprabhu and Ramacandra Puri met the Lord would offer him respectful obeisances considering him a godbrother of his spiritual master. Ramacandra Puri’s business, however, was to search for faults in the Lord.

After hearing this criticism Sri Caitanya Mahaprabhu was doubtful and apprehensive. He instructed His personal servant, Govinda, that “From today I shall only accept half as much prasadam as usual.” He said, “If you bring any more than this I will leave this place and you will not see Me anymore.” Govinda informed all the other devotees and when they heard it they felt as if their heads had been struck by thunderbolts. All the devotee condemned Ramacandra Puri saying, “This sinful man has come here and taken our lives.” After this both Sri Caitanya Mahaprabhu and Govinda ate only half the food they needed. Because of this all the other devotees gave up eating.

Some days passed in great unhappiness and after hearing what had happened Ramacandra Puri again visited Sri Caitanya Mahaprabhu. The Lord offered His obeisances to Ramacandra Puri, worshiping His feet. Then Ramacandra Puri smiled and instructed the Lord, “It is not the business of a sannyasi to gratify his senses, however, he should fill his belly somehow or other. I have heard that you have cut your eating in half. Indeed I see that you are skinny. Such dry renunciation is also not the religion of a sannyasi! A sannyasi eats as much as necessary to maintain his body but he does not enjoy satisfying his senses materially. Thus a sannyasi becomes perfect in spiritual advancement and knowledge.”

“There is no possibility of one’s becoming a yogi, O Arjuna, if one eats too much, or eats too little, sleeps too much or does not sleep enough. He who is temperate in his habits of eating, sleeping, working and recreation can mitigate all material pains by practicing the yoga system.” (Bg 6.16-17)

The amazing thing is all along Sri Caitanya Mahaprabhu respected Ramacandra Puri as being almost on an equal level with His spiritual master, and He was accepting the advice of Ramacandra Puri and took it as very valuable. Sri Caitanya Mahaprabhu said, “Why are you all angry at Ramacandra Puri? He is explaining the natural principles of sannyasa life. Why are you accusing him? For a sannyasi to indulge in satisfying the tongue is a great offense. A sannyasi should only eat what is needed to keep the body and soul together.”

Sri Caitanya Mahaprabhu behaved exactly like the Supreme Personality of Godhead, beyond the restriction of anyone’s intelligence. Whatever He liked He did, but His activities were very beautiful.

Ramacandra Puri only stayed in Jagannatha Puri for a short time and then he left to visit other holy places of pilgrimage. As soon as Ramacandra Puri left Jagannatha Puri all the devotees felt extremely happy, as if a great burden had been lifted from their shoulders. After his departure everything in Jagannatha Puri went back to normal and Sri Caitanya Mahaprabhu accepted the usual invitations and the usual prasadam and lead the congregational chanting of: Hare Krishna, Hare Krishna, Krishna Krishna, Hare Hare/ Hare Rama, Hare Rama, Rama Rama, Hare Hare.

All glories to His Divine Grace A.C. Bhaktivedanta Swami Prabhupada who has given us such a wonderful, ecstatic, transcendental English translation of Srila Krsnadasa Kaviraja Gosvami’s Sri Caitanya-caritamrta so we can have some idea of the life and pastimes of the Supreme Personality of Godhead, Lord Sri Caitanya Mahaprabhu.

[based on Caitanya-caritamrta Antya-lila chapter 8] 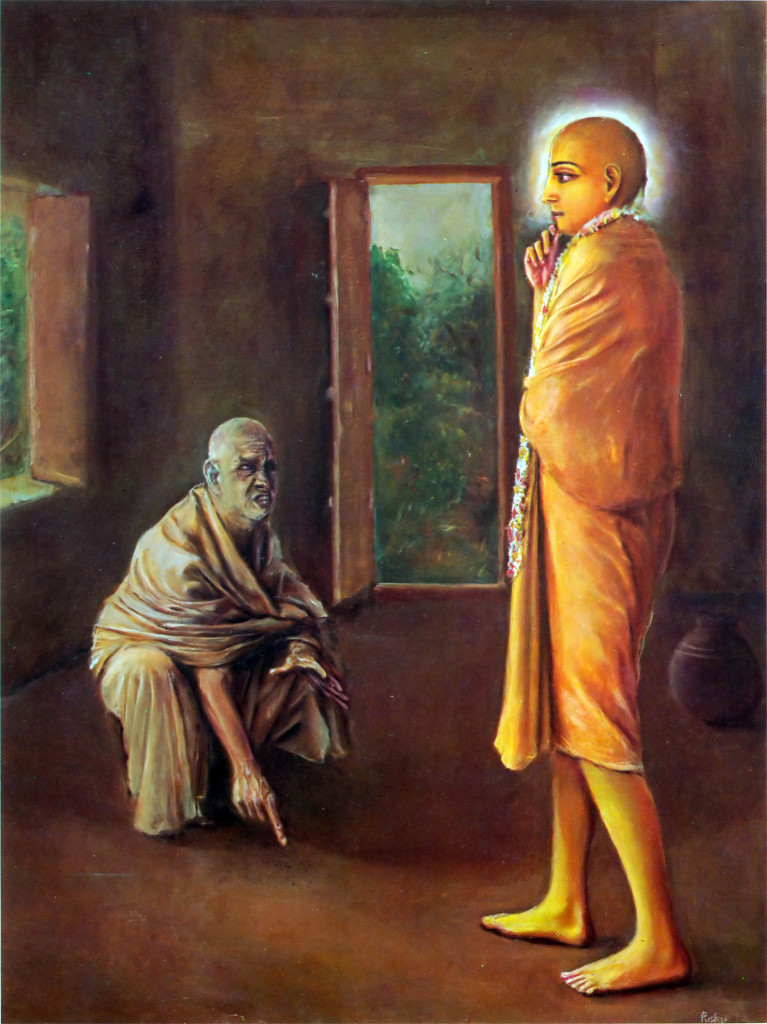 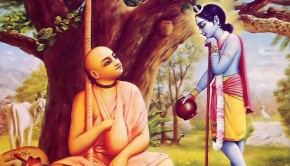