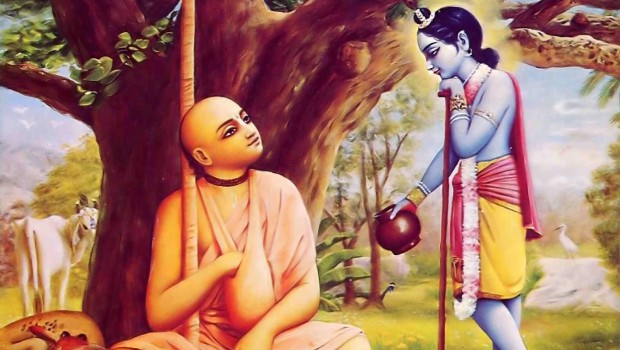 Madhavendra Puri recited this verse again and again at the end of his material existence. Thus uttering this verse, he attained the ultimate goal of life–O My Lord! O most merciful master! O master of Mathura! When shall I see You again? Because of My not seeing You, My agitated heart has become unsteady. O most beloved one, what shall I do now?

The uncontaminated devotees who strictly depend on the Vedanta philosophy are divided into four sampradayas, or transcendental parties. Out of the four sampradayas, the Sri Madhvacarya-sampradaya was accepted by Madhavendra Puri. Thus he took sannyasa according to parampara, the disciplic succession.

Beginning from Madhvacarya down to the spiritual master of Madhavendra Puri, the acarya named Laksmipati, there was no realization of devotional service in conjugal love. Sri Mdhavendra Puri introduced the conception of conjugal love for the first time in the Madhvacarya-sampradaya,

When Sri Krsna left Vrndavana and accepted the kingdom of Mathura, Srimati Radharani, out of ecstatic feelings of separation, expressed how Krsna can be loved in separation. Thus devotional service in separation is central to this verse.

Worship in separation is considered by the Gaudiya-Madhva-sampradaya to be the topmost level of devotional service. According to this conception, the devotee thinks of himself as very poor and neglected by the Lord. Thus he addresses the Lord as dina-dayardra natha, as did Madhavendra Puri. Such an ecstatic feeling is the highest form of devotional service.

Because Krsna had gone to Mathura, Srimati Radharani was very much affected, and She expressed Herself thus: “My dear Lord, because of Your separation My mind has become overly agitated. Now tell Me, what can I do? I am very poor and You are very merciful, so kindly have compassion upon Me and let Me know when I shall see You.”

Sri Caitanya Mahaprabhu was always expressing the ecstatic emotions of Srimati Radharani that She exhibited when She saw Uddhava at Vrndavana.

Similar feelings, experienced by Madhavendra Puri, are expressed in this verse. Therefore, Vaisnavas in the Gaudiya-Madhva-sampradaya say that the ecstatic feelings experienced by Sri Caitanya Mahaprabhu during His appearance came from Sri Madhavendra Puri through Isvara Puri. All the devotees in the line of the Gaudiya-Madhva-sampradaya accept these principles of devotional service. (CC Madhya-lila 4:196-197)

One Response to Dissapearance of Srila Madhavendra Puri–March 15, 2003