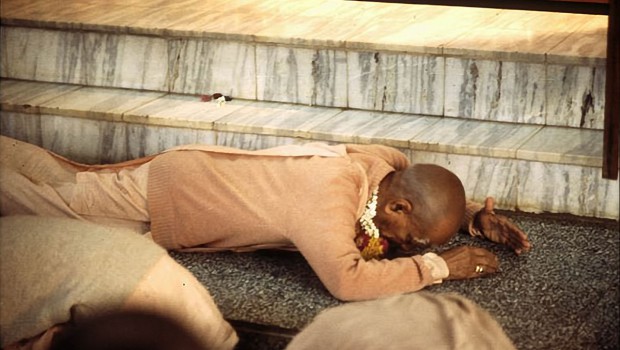 This post is in pursuance of the early article, “Deconstruction of Barriers” where we were pointing out that offenses made to devotees cause reactions, no matter what the reason. Krishna is adamant in His displeasure when any of His devotees are offended, and He punishes those who do. We are trying to prevent the devotees from falling into this tangled quagmire of offense and counter offense, like in the Daksa and Siva pastime.

When devotees get caught up a scenario like the Daksa and Siva pastime of cursing and counter cursing, then we find whole sections of devotees rejecting and kicking away of whole other sections of devotees. This is almost like the pastime of Ravana kicking out his brother, Vibhisana, over what Ravana considered to be a deviation, which in reality was the kicking away of a saintly devotee of God.

Christians have their WWJD, we also have our WWJD, or “what would Jayananda do.” We need his perpetual guidance to help solve our issues of strife. The non-devotees have a great slogan – respect, listen, stop. This is about how to stop abuse, like domestic violence and rape, etc. We need to borrow this slogan. Devotees need to realize that sometimes they tend to abuse other devotees. We are supposed to be the acharyas of non-abuse [give all respect to others] and yet sometimes it seems that we are behind the non-devotees in this regard. Often we don’t respect, or listen, and we are quick to abuse and ostracize devotees for having an open mind.

What would Jayananda do? He would never think to abuse another devotee, to ostracize him from the society of devotees, over some difference of perception of what Srila Prabhupada had said. Jayananda would work the slogan: respect – listen – stop abuse. Jayananda would say that maybe there are different opinions, but by istaghosthi and discussion, then we will come closer to the truth. If we still have some differences, then Jayananda would opt for unity within diversity. Jayananda would not make the foolish choice of burning down the barn for a few rats of a few different opinions. The pure devotee follower of Srila Prabhupada always places the welfare of the movement above his personal happiness. It’s the divisive nature of fanatics who don’t respect or listen, and who are quick to abuse devotees, which divides and destroys our movement.

About 33 years ago, I began to order some things from the BBT, and read the Gita. This was in Kansas. I had a grand-father who was a hell-fire brimstone preacher for a fundamentalist church. He got wind of this, and asked me over to his house, and sat me down, and said, “Tommy, we hear you are interested in Hinduism. We don’t like this.” You can imagine the awkwardness of the situation. You can imagine what I was going through, trying to explain to this hell-fire preacher, what KC was. He was thinking I was going to hell, but in reality I was going to Vaikuntha.

This was a situation where I knew that I was right, and knew the difficulty of penetrating a thick wall of prejudice that a fundamental Christian has. He doesn’t even know that it’s evil for Christians to eat meat. He’s not about to understand the higher truths of KC. So, sometimes we find the same situation when we try to explain to devotees the bare facts of what Srila Prabhupada said on guru-tattva. We find they are almost like the fundamental Christian, with their prejudice, due to their indoctrinations. I say almost, because we are much more intelligent than a hell-fire preacher who has no intention of listening. So the formula- respect, listen, and stop. Stop that tendency to abuse other devotees. By the freedom of discussion, or Istaghosthi, all devotees can settle these differences and not abuse other devotees. We have open minds, don’t we? We can discuss these things. If we think that we need a committee to dictate what we believe or not believe, then we are following a dictator, not our open minds.

The following is a conversation between myself and Bhaktin Miriam.

The background of the conversation- It stems from a few essays written by myself, one titled “I was a disciple of a disciple.” In summary, I quoted from Lokanatha Maharaja, who said “some or maybe all of the problems that arose in our movement after Srila Prabhupada left have their origin in our not properly understanding this position of founder-acharya.” He goes on to describe the scripture of the Sri Sampradaya, called Prappanamrta Tapana, which explains how the founder-acharya is the continuous savior, the udharika, of the coming generations, the current spiritual masters are his helpers, his upakarikas, and never equated to him even after hundreds of generations. I went on to explain how Srila Prabhupada spoke of a certain level of spiritual masters, in his book “Easy Journey” where he explains the monitor guru. And I heard Tamal Krishna say in class, 1986, that he was like a monitor guru. And other gurus have said similar realizations. I gave the suggestion, following Lokanatha Maharaja’s lead, that we could be more honest to the new devotees coming to the movement, by explaining this concept of monitor or upakarika guru, as option for some of the gurus. This gives credence to the concept of the model of the Sri Sampradaya, and the Madhva line, where the founder acharya is known as the udharika, or the perpetual savior of his movement, and the subsequent spiritual masters are his helper spiritual masters, or his upakarikas.

My reply- I want to assert that I mean no disrespect to the Iskcon gurus or devotees. I’m just observing the issues from an objective viewpoint. I’m not trying to negate gurus in Iskcon or demote them or disrespect them. I’m only studying what Srila Prabhupada said about guru-tattva. I’m only following the lead of Lokanatha Maharaja, and his understanding the position of the founder-acharya, and suggesting the concept of monitor or upakarika gurus.

When we examine the former acharyas in disciplic succession, we find permanent acharyas who are eternally liberated. All such acharyas were ordered to be acharya by their predecessor guru. If we are to set up a permanent guru-tattva system for Iskcon, then we must be honest in our guru-tattva, and honest to the new bhaktas and bhaktins. Our present system isn’t honest, because we are telling new devotees that all the gurus are eternal gurus, linking them to Srila Prabhupada and the disciplic succession and to Lord Sri Krishna, when some prove to be temporary situations. We are telling them that they are entering into a permanent spiritual relationship with the pure devotee of Lord Krishna, when the relationship is not always permanent. This is not in line with our guru-tattva as given by the previous acharyas, or Srila Prabhupada.

The name “officiating acharya” is not a common name for diksa guru. This is Srila Prabhupada’s term on 5/28/77. The term “regular” guru, could mean either monitor or diksa guru. “Regular” means the following: “customary, usual, or normal,” as found in the dictionary. There is room for a dual meaning of guru here, either upakarika monitor gurus, or perhaps a diksa guru, if the candidate is solidly situated in permanent liberation, [say 30 year trial period] or if he is showing unmistakable symptoms of bhava and prema, which leaves no doubt, showing self-effulgence. If you study the points made in “Easy Journey,” you will see that Srila Prabhupada is talking about his disciples being “spiritual master” and having “disciples” and yet he’s not talking about them being full diksa gurus in the parampara. A close study of all the points may bring you to this conclusion.

From the essay- You cannot tell me that there was ever a time in history or sastra, where a parampara diksa guru got into a temporary situation with Krishna and guru, after they were ordered gurus in parampara. There is no history of any previous gurus in the parampara who were in full permanent status, and later temporary spiritual status with the Lord and their guru. No situation of being spiritual one year and not spiritual the next year, or falling into a low status for years afterwards.

Miriam’s reply: All of ISKCON ignores this fact. They say, OK, just because some were not qualified does not mean that the rest can’t be diksa.

My reply to her reply-

The issue isn’t primarily whether others can be diksa, which is by qualification, and being ordered. The primary issue is that a great number of disciples have been disillusioned to the point of blooping or going to other camps. I have witnessed this personally, many, many times, and if anyone thinks this is not true, they are greatly deluded. Our system should not cause this to happen to even ONE person!, what to speak of hundreds and thousands of people! The betrayal of trust and faith is a very heavy blow to the spiritual lives of so many new devotees. I’ve witnessed the aftermath of several epicenters of these disasters, and the fallout and aftershocks continue for decades. This kind of system sets the stage for the same thing to happen over and over again, for all future generations. The positive alternative is the concept of monitor guru, or upakarikas, for some gurus, as found in Srila Prabhupada’s “Easy Journey.” The position of Lokanatha Maharaja’s suggestion, and monitor gurus, let’s the water find it’s own level, instead of saying that all gurus are on the uttama platform. This is to the advantage of gurus and all devotees.

To make this point of water finding it’s natural level, one guru was seen in an inappropriate situation with a female devotee, and he begged the devotee not to tell his disciples. Another guru was seen through a window, early morning, with female devotee, no need for details. Another guru reads cheap sci-fi novels all the time. How many have a problem? Not to condemn, but we see a temporary status in these situations, and therefore an upakarika guru status. The GBC says something similar with the term “downsized gurus.” Being monitor or upakarika guru is glorious. The option of being monitor guru is to their advantage. If they see themselves begin to slip, they can save face and not have to bloop or walk away in shame. The aftermath of loss of trust and faith will not be a cataclysmic disaster, as it was in the past. It’s a chance for the real water level of advancement to find it’s natural level.

Ramesvara was saying at the end, how he was so sick and tired of always pretending to be a pure devotee, putting on a facade. A system of monitor or upakarika guru would take the pressure off, let them be more real in their actual advancement. And if they are really qualified, and if Srila Prabhupada really ordered them to be diksa guru, then fine, we give all honor to them. But this cannot be the case for everyone, nor for all of the future candidates in coming generations. It is better for everyone to realize the monitor upakarika guru level reality, to give the new people an honest assessment of the guru situation, before they find out by experience or learning the history. They will be grateful for the honesty, instead of being dismayed by finding a shocking truth, which will jeopardize their faith. Let the water of advancement find it’s natural level.

I hope my words have not offended any devotees of the Lord, your servant,