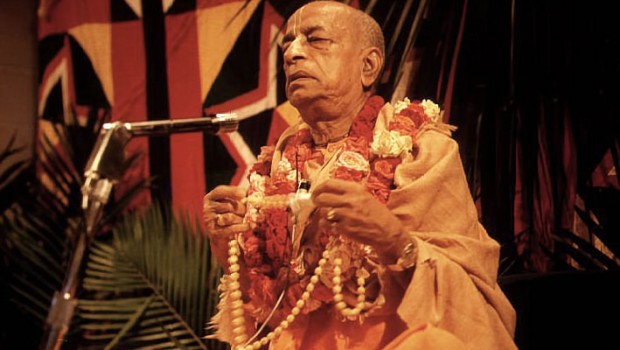 Ive read in Prabhupada’s books that this transcedental sound is passed down through a lineage of masters, and the pure sound is preserved by great yogis as himself. Also these great yogis share this sound with their desciples in first initiation. Is this the way you can begin to practice this kind of yoga? Can I receive this sound by anybody or do I need to receive it by someone like Prabhupada?

Ive read in AC Bhaktivedanta Swami Prabhupada’s books that this transcedental sound is passed down through a lineage of masters, and the pure sound is preserved by great yogis as himself. Also these great yogis share this sound with their desciples in first initiation. Is this the way you can begin to practice this kind of yoga? Can I receive this sound by anybody or do I need to receive it by someone like Bhaktivedanta Swami Prabhupada?

Thank you for your questions and comments. Yes, initiation by a qualified guru is essential for further advancement in Krishna Consciousness. However, initiation does not make the Hare Krishna Maha-Mantra work. There are three stages of chanting which I shall explain later, offenceless chanting is the goal.

It is stated in the Caitanya-caritamrta:

“One does not have to undergo initiation or execute the activities required before initiation. One simply has to vibrate the holy name with his lips. Thus even a man in the lowest class [candala] can be delivered.

“To chant the holy name of the Lord, one need not depend upon other paraphernalia, for one can immediately get all the desired results of linking with the Supreme Personality of Godhead. It may therefore be questioned why there is a necessity for initiation or further spiritual activities in devotional service for one who engages in the chanting of the holy name of the Lord. The answer is that although it is correct that one who fully engages in chanting the holy name need not depend upon the process of initiation, generally a devotee is addicted to many abominable material habits due to material contamination from his previous life. In order to get quick relief from all these contaminations, it is required that one engage in the worship of the Lord in the temple. The worship of the Deity in the temple is essential to reduce one’s restlessness due to the contaminations of conditioned life. Thus Narada, in his pancaratriki-vidhi, and other great sages have sometimes stressed that since every conditioned soul has a bodily concept of life aimed at sense enjoyment, to restrict this sense enjoyment the rules and regulations for worshiping the Deity in the temple are essential. Srila Rupa Gosvami has described that the holy name of the Lord can be chanted by liberated souls, but almost all the souls we have to initiate are conditioned. It is advised that one chant the holy name of the Lord without offenses and according to the regulative principles, yet due to their past bad habits they violate these rules and regulations. Thus the regulative principles for worship of the Deity are also simultaneously essential.”

It is stated over and over again that one must have a qualified guru in the correct line of disiplic succession in order to become connected with Krishna. This is because, especially in the age of Kali-yuga, we are constantly bombarded with material life and can easily fall back in to maya (illusion). Our spiritual master shows us the light, lifts us out of maya and brings us Krishna.

In this material world we really have nothing else to do except serve Krishna. This is our “Rasa” (our relationship) with Krishna, simply serve Krishna. Krishna says in the Bhagavad Gita:

“If one offers Me with love and devotion a leaf, a flower, fruit a water, I will accept it.”

So we can offer food preparations to Krishna, never thinking of ourselves, our enjoyment, and Krishna will accept it. And in return He will give us great satisfaction. This is the most satisfying type of gratification, gratification from serving Krishna.

“Diksa is the process by which one can awaken his transcendental knowledge and vanquish all reactions caused by sinful activity. A person expert in the study of the revealed scriptures knows this process as diksa.,

“‘Unless one is initiated by a bona fide spiritual master, all his devotional activities are useless. A person who is not properly initiated can descend again into the animal species.'”

There is always a danger that one can fall victom to maya (illuson) thinking that this material world can bring us happiness. The qualified spiritual master insures us to stay Krishna Conscious. However, we can still fall victom to maya even with proper initiation. Take for instance Chota Haridasa, who took syanyasa (renounced order of life) from Lord Caitanya (Krishna Himself). Chota Haridasa looked with lust at a woman. He was at once rejected from the society of Lord Caitanya’s personal associates to make an example.

“‘It is the duty of every human being to surrender to a bona fide spiritual master. Giving him everything-body, mind and intelligence-one must take Vaisnava initiation from him.”

“With the material senses one cannot understand the transcendental holy name of the Lord or His form, activities and pastimes. But when one actually engages in devotional service, utilizing the tongue, the Lord is revealed., As it is said in the Caitanya-caritamrta (Madhya 17.134):

So we can see that even though it says “adiksitasya vamoru krtam sarvam nirarthakam/pasu-yonim avapnoti diksa-virahito janah” “Unless one is initiated by a bona fide spiritual master, all his devotional activities are useless. A person who is not properly initiated can descend again into the animal species,”

Chanting with understanding and hearing the maha-matra and explianation from the proper source (Srila Prabhupada) will lead one to Krishna.

The catch here is that the Holy Names (Maha-Mantra) can deliver one from material bondage and give one the opportunity to develop the being’s original relationship with Krishna, the Absolute…. but the catch is to develop the chanting “without” offense.

Here are some more quotes about the chanting process:

(SB.6.3.32)”Even if one chants the Hare Krsna maha-mantra offensively, one can avoid offenses by continuously chanting without deviation.

(SB 7.5.23)There is no way to atone for any of these offenses. It is therefore recommended that an offender at the feet of the holy name continue to chant the holy name twenty-four hours a day. Constant chanting of the holy name will make one free of offenses, and then he will gradually be elevated to the transcendental platform on which he can chant the pure holy name and thus become a lover of the Supreme Personality of Godhead.

Srila Prabhupada: “In the beginning we chant in offensive stage-the ten kinds of offenses. But that does not mean that we shall not chant. Even there are offenses, we shall go on chanting. That chanting will help me to get out of all offenses. Of course, we must take care that we may not commit offenses. Therefore this list of ten kinds of offenses are given.”

Devotee (1): You said that Ajamila, because he chanted “Narayana, Narayana,, offenselessly, so he went to Vaikuntha. And then you said if we are chanting, if we chant Hare Krsna, all our sinful activities are washed away. Is that so even if we chant offensively?

So to answer your question,”Is this the way you can begin to practice this kind of yoga? Can I receive this sound by anybody or do I need to receive it by someone like Bhaktivedanta Swami Prabhupada?”

Yes, simply by chanting the Maha-Mantra (Hare Krishna Hare Krishna Krishna Krishna Hare Hare Hare Rama Hare Rama Rama Rama Hare Hare) you can begin the Bhakti-yoga process. You must hear this mantra from a devotee of Krishna, someone who knows what the mantra means and who knows who Krishna is and who is being guided by Srila Prabhupada’s instructions. You dont need to learn the matra from a self realized soul per say. Any sincere devotee of Krishna can show you. However, the person you hear it from should somehow be connected in the diciplic sucession and be hearing from the proper sources. Srila Prabhupada says that milk touched by the lips of a serpent causes a poisonus effect, meaning one should not learn it from someone who does not know who Krishna is. Hearing this Maha-Mantra from the most advanced Spiritual Master like AC Bhaktivedanta Swami Prabhupada makes the Maha-Mantra more powerful and will accelerate your taste for Krishna Consciousness. Receiving initiation from a different line other then Bhaktivedanta Swami Prabhupada is not recommended. He is the 32nd Acharya in the disiplic succession directly from KRSNA.

Srila Prabhupada explains that just as if an apprentice does the magic as exactly told to him by the magician, then the result is the same. He says: “Just like a peon has brought a money order for you, thousand dollars. So he’s giving you. So you cannot say, ‘Oh, here is a peon. He’s a poor man. How he can give me one thousand dollars?’ He’s not giving; the money is sent by somebody else. He’s simply handing you.”

You can hear this mantra directly from Srila Prabhupada on tape or CD and this is enough to bring you to Krishna. Siksa guru, hearing from other advanced devotees is also recomended to understand and keep in Krishna consciousness, but we must be careful to be sure that that we know about who we are hearing from and that they are sincere advanced devotees, not after fame, fortune, and admiration. Here we can use our intelligence.

There are “so called gurus” who have offended Srila Prabhupada; who lie, cheat, and decieve in order to beget deciples. They may say something to the effect of “Srila Prabhupada wispered to me that his movement was not so sucessful and instructed me to properly guide his desiples.” When the truth is that Srila Prabhupada was the single most sucessful acharya in spreading the teachings of Lord Caitanya. These “so called” gurus initiate whimsically, not caring if the candidates to be initiated have any qualification at all to be initiated: and the reason? One can only conclude that they are after fame, fortune, and admiration. Srila Prabhupada’s standard was the highest. He would not initiate anyone unless they were chanting 16 rounds a day and following the four regulatitve principals for at least six months. These same “so called” gurus will also say they are teaching the “higher understanding” of Krishna Consciousness (insinuating that Srila Prabhupada’s teaching is somehow “lower”), when, if you compare what they are saying, Srila Prabhupada’s teachings are more clear and include everything and anything that could ever possibly be said about Krishna Consciousness.

I hope this answers your questions.

“Ten Offenses to Avoid while Chanting the Hare Krishna Maha-Mantra“:
It is essential for a neophyte devotee who is beginning to follow the path of devotional service to observe these ten principles. One should also try to avoid offenses in serving the Lord and in chanting His holy names. There are ten kinds of offenses which one can commit while chanting the holy name, and they should be avoided.

(1) blaspheming a devotee of the Lord,

(2) considering the Lord and the demigods on the same level or thinking that there are many gods,

(3) neglecting the orders of the spiritual master,

(4) minimizing the authority of the scriptures (the Vedas),

(5) interpreting the holy names of God,

(6) committing sins on the strength of chanting,

(7) instructing the glories of the Lord’s names to the unfaithful,

(9) being inattentive while chanting the holy name,

(10) remaining attached to material things in spite of chanting the holy names.

11 Responses to Does Initiation Make The Maha-Mantra Work?