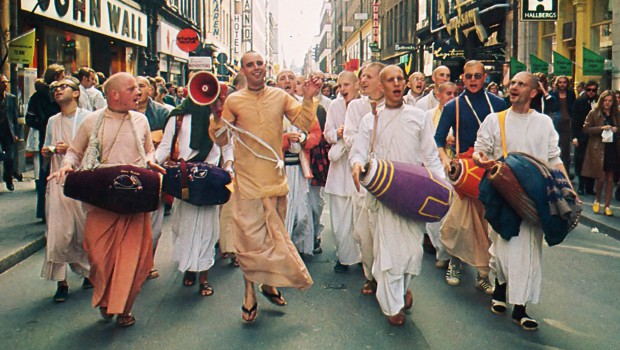 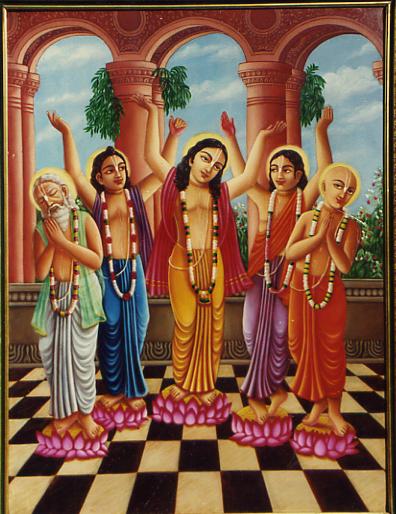 What does the word “Sankirtana” mean?

Sankirtana is a Sanskrit word. “San” comes from the word “samyak” which means “complete” and Kirtan means “glorifying” or “describing.” Generally when one is “glorified”, there is good reason. For instance, if a man becomes wealthy, most likely he will become famous and naturally he will be glorified, praised, and adored for his wealth and fame. But, who can say that they posses all wealth or all fame?

It is stated in the ancient Vedic text called the Srimad-Bhagavatam that God posses all these six opulence’s in full:  He is complete in wealth, renunciation, fame, knowledge, strength and beauty.

One of God’s many names is Asamaurdhva, which means that no one is equal to or greater than Him. In this connection the word Sankirtana has its complete meaning because only He can be glorified “completely.” A common man may be glorified, but his glorification can only go so far. There is always another who out does him. Another who possesses more of the thing he is being glorified for, therefore the common man’s glorification falls short. But God possesses everything  therefore only He can be completely glorified.

Sankirtana is universal to all religions. King David preached, “From the rising of the sun unto its setting, the Lord’s name is to be praised.” (Psalms 113:3)  Lord Buddha said, “All who sincerely call upon My name will come to Me after death, and I will take them to Paradise.” (Vows of Amida Buddha 18) Muhammad declared, “Glorify the name of your Lord, the most high.” (Koran 87.2) “Allah, who does not fit into heavens or worlds, fits into the hearts of men. The process used to clean the heart is dhikrullah (chanting the names of Allah). Dhikr is a key to the secrets of life.” (Ninety-Nine Names of Allah) It is written in the Bible, “Whosoever shall call upon the name of the Lord shall be saved.” (Acts 2:21) And in the ancient Sanskrit Vedic scriptures it says, “Chant the holy name, chant the holy name, chant the holy name. In this age of quarrel there is no other way, no other way, no other way to attain spiritual enlightenment.” (Brihan-Naradiya Purana)

The performance of Sankirtana is a spiritual cleansing for the mirror of the mind, just as soap is a material cleansing for the body.  According to the Vedic scriptures, there are three stages for spiritual cleansing, the first is to cleanse the mirror of the mind by Sankirtana. It is stated in the Bhagavad-gita, “For him who has conquered the mind, the mind is the best of friends; but for one who has failed to do so, his very mind will be the greatest enemy.” (Bhagavad-gita Ch.6, text 6)

Due to long term association with matter, the mind becomes polluted, or dirty and this Sankirtana process purifies the mind. The second stage is to become free from material existence. Material existence means to be always hankering and lamenting. “I must have a new car, I need more money, I need a good partner, I need this, I must have that. Then when I have these things; I lament, I have lost my partner, I have lost my money, I have lost my car. I am simply in a lamenting state.” So the second stage is to become free from this lamenting. The third stage is called “Brahma-bhutah prasannatma”. This is described in the Bhagavad-gita, “One who is thus transcendentally situated at once realizes the Supreme Brahman. He never laments nor desires to have anything; he is equally disposed to every living entity. In that state he attains pure devotional service unto Me.”

Sankirtana is generally performed in a congregation but anyone can sing or chant alone or with anyone. The Maha Mantra, or “Great Chant” is recommended by all great authorities:

“All Glories to His Divine Grace A.C. Bhaktivedanta Swami Srila Prabhupada for bringing Lord Caitanya’s Sankirtana Movement All Around the Globe!”

One Response to Sankirtana: A Cleansing for the Soul