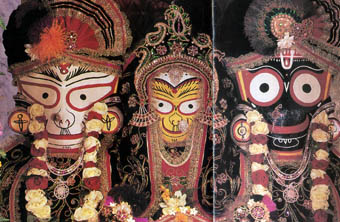 The Seattle Rathayatra gets better every year! This year Lord Jaganath’s festival was set up in such a nice way that it was seen by the thousands of tourists and devotees along the famous waterfront district. Even the Mayor showed up and received a Jaganath Sweatshirt from one of the main sponsors of the festival, Bhakta Mike. The Mayor said that he ‘loved the cultural event.’

The festival lasted for three days over the Labor Day weekend. A short rain came to purify the atmosphere just before the start of the festival which was very auspicious.

The highlight of this years festival was of Tatiksava Karunika, aka T.K., and his Krsnatix band. The crowd was dancing like jubilant peacocks as TK and the crew cranked out the transcendental jams. Dance contests were held and there were so many good dancers that more prizes of Jaganath T-shirts and Sweatshirts were handed out to the ecstatic crowd. The grand finale was the Song about Lord Nasringadeva.

Lord Jaganath wanted to glorify His pure devotee so He arranged that the Seattle Times Newspaper printed a picture of Srila Prabhupada that looked like he was walking through the festival from one of the Festival of India displays. Srila Prabhupada lives!

The main Kirtan during the parade was led by Lokanath Maharaja with more devotees than ever from all over the world chanting and dancing very ecstatically for the pleasure of the Lord. Harivilasa Prabhu also led some nice Kirtans and played nice drums and other exotic instruments. The Kirtans were so loud that they could be heard for blocks all day long for three days straight!

The prasadam is the best free feast served anywhere according to many of the devotees. Everything was cooked in pure ghee by the enthusiastic devotees. The main subji was loaded with opulent chunks of curd with spinach. There were many dance performances by young and other devotees including Visnu Dasa.

Thanks to all of the devotees who helped with this most auspicious preaching event! Srila Prabhupada was obviously pleased with this effort and thus was Lord Sri Krsna who showed it by having the picture of His Divine Grace printed prominently in the main paper. Don’t miss next years festival if you want to have a transcendental ‘good time’!