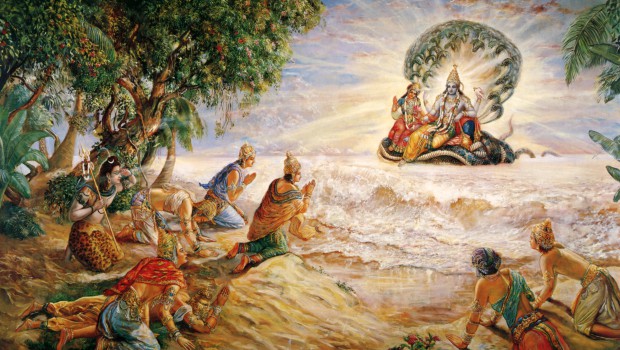 The Vedic Theatre Company in association with producers in India are discussing preparations for an adaptation of the great Vedic classic, Srimad-Bhagavatam. This is an epic undertaking that to our knowledge, has never been attempted as a major feature film from a Vasinava point of view.

With a proposed budget, costing many crores, we are seeking letters of intent or an intense desire to become involved with a unique adaptation of this mammoth work concentrating on the essence and high points of the Bhagavatam. We are considering one of three ways of doing this:

All ideas are taken into consideration. It may also be, depending upon the scope of the project, that the film Bhagavatam will be directed by devotees who are experienced in film production and be given the opportunity to direct the various segments as one whole. For example, a devotee directs the beginning, another the middle and yet another director, the end. Again, these are ideas under consideration.

Right now, we are concerned about the manner in which an adaptation can be achieved in a visually powerful way while still retaining it’s spiritual message. There are many approaches to this and we would like to hear from the Krsna conscious devotees out there who may like to become involved with this.

We are anticipating that upon approval of a final 1st draft screenplay, actual shooting could begin in India in the spring-summer of 2004.

Again, we are seeking input from the devotee community at large as this is a team effort requiring many skills. Right now, I would like to communicate with a devotee who is adept at screenwriting and at the same time knows Bhagavatam. Basically, it would involve a collaboration possibly with many writers and there would be pay according to a final budget breakdown.

3 Responses to Srimad-Bhagavatam – The Movie