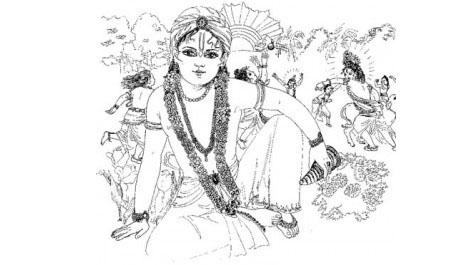 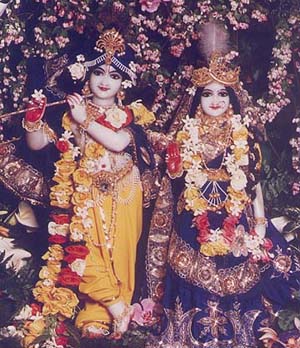 Srila Bhaktisiddhanta Sarasvati Thakura writes in his Anubhasya, “Ten miles southwest of the Canpadanga railway station on the narrow-gauge railway line from Howrah, in Calcutta, to Atma, a village in the Hugli district, is a small town named Khanakula-krsnanagara, where the temple in which Abhirama Thakura worshiped is situated. During the rainy season, when this area is inundated with water, people must go there by another line, which is now called the southeastern railway. On this line there is a station named Kolaghata, from which one has to go by steamer to Ranicaka. Seven and a half miles north of Ranicaka is Khanakula. The temple where Abhirama Thakura worshiped is situated in Krsnanagara, which is near the Kula (bank) of the Khana (Dvarakesvara River); therefore this place is celebrated as Khanakula-krsnanagara. Outside of the temple is a bakula tree. This place is known as Siddha-bakula-kunja. It is said that when Abhirama Thakura came there, he sat down under this tree. In Khanakula-krsnanagara there is a big fair held every year in the month of Caitra [March–April] on the Krsna-saptami, the seventh day of the dark moon. Many hundreds and thousands of people gather for this festival. The temple where Abhirama Thakura worshiped has a very old history. The Deity in the temple is known as Gopinatha. There are many sevaita families living near the temple. It is said that Abhirama Thakura had a whip and that whoever he touched with it would immediately become an elevated devotee of Krsna. Among his many disciples, Srimana Srinivasa Acarya was the most famous and the most dear, but it is doubtful that he was his initiated disciple.” (CC Adi-lila 11:13-15)

One Response to The Great Acharya Abhirama Thakura

The Story of Haridasa Thakur and Ramachandra Khan →