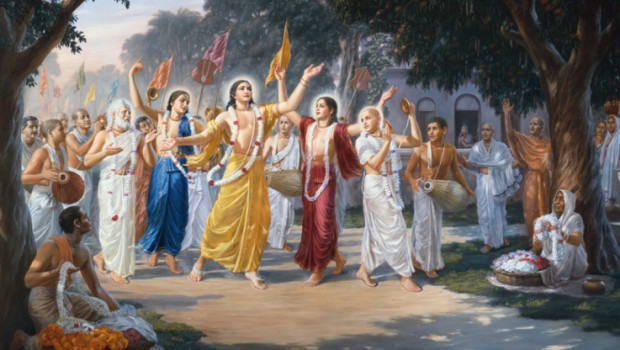 While the brahmana was fasting, Sri Chaitanya Mahaprabhu asked him, “Why are you fasting? Why are you so unhappy? Why are you so worried?” The brahmana replied, “I have no reason to live. I shall give up my life by entering either fire or water. My dear Sir, mother Sita is the mother of the universe and the supreme goddess of fortune. She has been touched by the demon Ravana, and I am troubled upon hearing this news. Sir, due to my unhappiness I cannot continue living. Although my body is burning, my life is not leaving.” Sri Chaitanya Mahaprabhu replied, “Please do not think this way any longer. You are a learned pandita. Why don’t you consider the case?”

Sri Chaitanya Mahaprabhu continued, “Sitadevi, the dearmost wife of the Supreme Lord Ramachandra, certainly has a spiritual form full of bliss. No one can see her with material eyes, for no materialist has such power. To say nothing of touching mother Sita, a person with material senses cannot even see her. When Ravana kidnapped her, he kidnapped only her material, illusory form. “As soon as Ravana arrived before Sita, she disappeared. Then just to cheat Ravana she sent an illusory, material form. Spiritual substance is never within the jurisdiction of the material conception. This is always the verdict of the Vedas and Puranas.”

There, among the brahmanas, Sri Chaitanya Mahaprabhu listened to the Kurma Purana, wherein was mentioned the chaste woman’s narration. Srimati Sitadevi is the mother of the three worlds and the wife of Lord Ramachandra. Among chaste women she is supreme, and she is the daughter of King Janaka. When Ravana came to kidnap mother Sita and she saw him, she took shelter of the fire-god, Agni. The fire-god covered the body of mother Sita, and in this way she was protected from the hands of Ravana.

Upon hearing from the Kurma Purana how Ravana had kidnapped a false form of mother Sita, Sri Chaitanya Mahaprabhu became very much satisfied. The fire-god, Agni, took away the real Sita and brought her to the place of Parvati, goddess Durga. An illusory form of mother Sita was then delivered to Ravana, and in this way Ravana was cheated. After Ravana was killed by Lord Ramachandra, Sitadevi was brought before the fire and tested. When the illusory Sita was brought before the fire by Lord Ramachandra, the fire-god made the illusory form disappear and delivered the real Sita to Lord Ramachandra.

Sri Chaitanya Mahaprabhu returned to southern Mathura [Madurai] and delivered the original manuscript of the Kurma Purana to Ramadasa Vipra. “When he was petitioned by mother Sita, the fire-god, Agni, brought forth an illusory form of Sita, and Ravana, who had ten heads, kidnapped the false Sita. The original Sita then went to the abode of the fire-god. When Lord Ramachandra tested the body of Sita, it was the false, illusory Sita that entered the fire. At that time the fire-god brought the original Sita from his abode and delivered her to Lord Ramachandra.” Ramadasa Vipra was very much pleased to receive the original leaf manuscript of the Kurma Purana, and he immediately fell down before the lotus feet of Sri Chaitanya Mahaprabhu and began to cry.

After receiving the manuscript, the brahmana, being very much pleased, said, “Sir, You are Lord Ramachandra Himself and have come in the dress of a sannyasi to give me audience. My dear Sir, You have delivered me from a very unhappy condition. I request that You take Your lunch at my place. Please accept this invitation. Due to my mental distress I could not give You a very nice lunch the other day. Now, by good fortune, You have come again to my home.” Saying this, the brahmana very happily cooked food, and a first-class dinner was offered to Sri Chaitanya Mahaprabhu. Sri Chaitanya Mahaprabhu passed that night in the house of the brahmana. Then, after showing him mercy, the Lord started toward Tamraparni in Pandya-desa.

12 Responses to The Story of Ramadasa Vipra