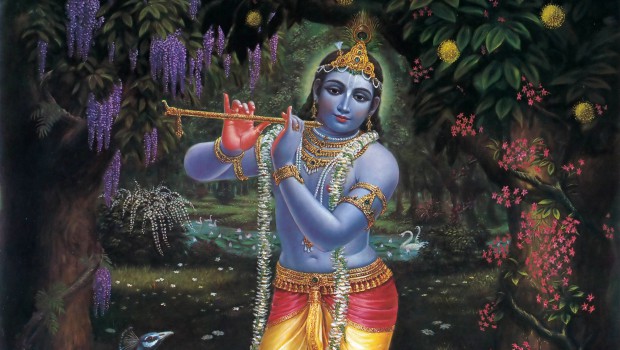 So if you smear your eyes with love of Godhead, then you will see God always. Santah sadaiva hrdayesu vilokayanti. Yes. So devotion. So this is the way of understanding God. By service, by enhancing love… This love can be increased only by service. Otherwise there is no possibility. Sevonmukhe hi jihvadau. The more you increase your service spirit, the more you increase your dormant love of God.

“O my Lord, sustainer of all that lives, Your real face is covered by Your dazzling effulgence. Kindly remove that covering and exhibit Yourself to Your pure devotee.”

Here is Vedic evidence. This Isopanisad is Veda, part of the Yajur Veda. So here it is said, hiranmayena patrena satyasya apihitam mukham. Just like the sun. There is, in the sun planet, there is a predominating Deity whose name is Vivasvan. We get it, this information we get from Bhagavad-gita. Vivasvan manave praha. So in every planet there is a predominating Deity.

Just like in your this planet, if not Deity, somebody like president there is. Formerly, there was only one king on this planet, up to Maharaja Pariksit. One king was. There was only one flag ruling over this whole planet. Similarly, in every planet there is a predominating Deity. So here it is said that the supreme predominating Deity is Krsna, in the spiritual, in the topmost planet in the spiritual sky. This is material sky. In the material sky this is one of the universes. There are millions and trillions of universes. And within this universe there are millions and trillions of planets. Yasya prabha prabhavato jagad-anda-koti [Bs. 5.40]. Jagad-anda. Jagad-anda means universe. Anda: just like an egg, this whole universe. So koti. Koti means hundreds and thousands.

So in the brahmajyoti there are hundreds and thousands of these universes, and within this universe there are hundreds and thousands and thousands, unlimited number of Vaikunthas, planets. Each Vaikuntha planet is predominated by the Supreme Personality of Godhead. Except in the Krsna planet, all other Vaikuntha planets, they are predominated by Narayana, and each Narayana has got different names, some of which we know. Like just we utter Pradyumna, Aniruddha, Sankarsana… We have got twenty-four names only, but there are many others. Advaitam acyutam anadim ananta-rupam [Bs. 5.33].

So these planets are covered by the brahmajyoti effulgence. So here it is prayed that hiranmayena patrena satyasya apihitam. Apihitam means covered. Just like you cannot see the sun globe on account of this dazzling sunshine, similarly, the Krsna planet, here you have the picture. From the Krsna planet the effulgence is coming out. So one has to penetrate this effulgence. That is being prayed here. Hiranmayena patrena satyasya. The real Absolute Truth, Krsna, His planet is covered by the Brahman effulgence. So the devotee is praying, “Kindly move it. Wind it so that I can see You really.” So brahmajyoti, the Mayavada philosophers, they do not know that beyond brahmajyoti there is anything. Here is the Vedic evidence, that the brahmajyoti is just like golden effulgence. Hiranmayena patrena. This is covering the real face of the Supreme Lord. Tat tvam pusann apavrnu. So, “You are sustainer, You are maintainer. Kindly uncover this so that we can see You actually, Your face.”

The idea is that Krsna planet or the Vaikuntha planets, they are beyond this Brahman effulgence, and those who are devotees, they are permitted to enter into these spiritual planets. Those who are not devotees, simply jnanis or demons… The jnanis and demons, they are offered the same place. The jnanis… Aruhya krcchrena param padam tatah [SB 10.2.32]. They practice severe austerities, penances, to enter into the Brahman effulgence. But the demons, simply by becoming enemy of Krsna, they immediately get that place. The demons who are killed by Krsna, they are immediately transferred to this Brahman effulgence. So just imagine, the place which is given to the enemies of Krsna, is that very covetable thing?

Suppose if somebody comes who is my enemy, I give him some place, and somebody, my intimate friend, I give him some other place. Similarly, this Brahman effulgence is not at all covetable. Therefore Prabodhananda Sarasvatipada, he has composed a verse, that Brahman… Kaivalyam narakayate. Kaivalya means the Brahman effulgence, simply spiritual light. So kaivalyam narakayate. He says that this Brahman effulgence is just like hell. For a devotee, this Brahman… The jnanis who are trying to merge into the Brahman effulgence, for devotee it is stated as hell. Kaivalyam narakayate. Tri-dasa-pur akasa-puspayate. And tri-dasa-pur means the planets of the demigods within this material world. People are very much anxious to go into the heavenly planet. That is called tri-dasa-pur or tri-dasa-pur, the residential quarters of the demigods. And for a devotee it is understood as will-o’-the-wisp, akasa-puspayate. And durdantendriya-kala-sarpa-patali protkhata-damstrayate. And the yogis, they are trying to control the senses, which are considered as venomous serpents, the senses. That’s a fact.

So the bhakta says that “We are not afraid of the senses.” Why? Protkhata-damstrayate. Because we have extracted the poison teeth. The senses has got a poison teeth. As soon as you indulge in sense gratification, immediately you become degraded. Immediately. So it is just like a venomous serpent. As soon as touches you, little biting, finished your life. So it is like that. Durdanta-kala-sarpa-patali, indriya. But these venomous snakes, if their poison teeth is taken away, then it may be fearful for the boys and children. But if an elderly person knows that his poison teeth has been taken away, nobody’s afraid of it. So this Krsna consciousness means that we take away the poison teeth of the senses. So that even Krsna conscious persons are allowed for sense gratification, the poison teeth is broken. So therefore they are not gliding down to the hellish condition of life.

Just like the… You understand the sun planet from here. You are seeing the sun planet, that’s a fact, but that does not mean you know what is actually the sun planet is, because you have no access to approach there. You may speculate, that’s all. Speculation means the blind man seeing the elephant. Somebody thought, “Oh, it is just like a pillar.” Yes. Big, big legs. Somebody understood the trunk. Somebody understood the ears, elephant. There is a story, some blind men studying the elephant. So they were giving different conclusions. Somebody: “The elephant is just like a pillar.” Somebody says, “Elephant is just like big boat.” Somebody is… Somebody is… But actually what is elephant, if you have no eyes to see, you can go on speculating. Therefore it is here said that pusann apavrnu. “Please uncover the covering. Then I can see You.”

So that seeing power is the bhakta’s, the devotee’s, because Krsna certifies, bhaktya mam abhijanati [Bg. 18.55]. Premanjana-cchurita-bhakti-vilocanena santah sadaiva hrdayesu vilokayanti [Bs. 5.38]. Those who have developed love of Godhead by that ointment, prema, ointment… Just like sometimes… In India it is very… They have got some… What is called? Surma? Ungent, surma. Yes. If you apply that surma your sight becomes bright immediately. So if you smear your eyes with love of Godhead, then you will see God always. Santah sadaiva hrdayesu vilokayanti. Yes. So devotion. So this is the way of understanding God. By service, by enhancing love… This love can be increased only by service. Otherwise there is no possibility. Sevonmukhe hi jihvadau. The more you increase your service spirit, the more you increase your dormant love of God. And as soon as you are in the perfectional stage of love of God, you see God always, every moment. Twenty-four hours you can see.
Thank you very much.
Devotees: All glories to Prabhupada. (end)

19 Responses to Uncover The Cloud To See Krishna