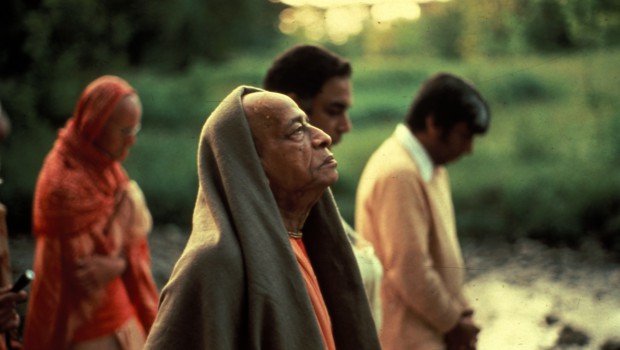 You are the eternal captain of the lotus ship of Lord Caitanya’s mercy. We were so fortunate that you picked us up from the ocean of maya and gave us shelter aboard your ship. This ship named Iskcon was plying smoothly through the treacherous waters of Kali-yuga, with your beautiful vapu and your eternal vani always there to help us weather the various storms of maya.

Dear Srila Prabhupada, all glories to you.

We think we have met your goodness by the will of providence just so that we may accept you as captain of the ship for those who desire to cross the difficult ocean of Kali. (SB 1.1.23)

You are the eternal captain of the lotus ship of Lord Caitanya’s mercy. We were so fortunate that you picked us up from the ocean of maya and gave us shelter aboard your ship. This ship named “Iskcon” was plying smoothly through the treacherous waters of Kali-yuga, with your beautiful vapu and your eternal vani always there to help us weather the various storms of maya.

We held on for dear life to your dhoti and battened down the hatches, and although you warned us of the power of the ocean of maya, sometimes to our great sorrow, a mate would lose his grip and be swept off the deck into the waters, lost again to the sea. You said that we have declared war on maya, and sometimes there would be causalities.

When the storms subsided, we would host over the harinam-sankirtan lifeboats, and thus we would venture out into the sea of Kali and proclaim the glories of Lord Sri Krishna with loud banners and cheers. We threw out lifesavers, in the forms of BTG’s and your transcendental literatures and mantra cards to the suffering souls of the sea, scooping up the lost swimmers, and often by your potency, we would reel in a few floundering souls and take them back to the ship.

Many a time we would look out on the horizon and see some ship mates riding their surfboards, merrily skiing on the waves, as your ship plied smoothly through the murky waters. These souls were exercising their constitutional natures of being of the tatasva-sakti category, or the “marginal potency.” Thus they were demonstrating their intrinsic “marginal potency” by regulating their activities to the peripheral boundaries, or keeping themselves on the marginal fringe of devotional activities. They would try to squeeze out a few more drops of fleeting pleasure from the vast waters of Maya, and simultaneously hold on for dear life to their lifelines, and then some times they would haul themselves back up on deck whenever there was a feast or major appearance day. After a sumptuous feast and a little “left side down” they would swab the decks for a while and then sneak back out to their surfboards. Someone pointed them out, saying, “Look at the surfers, Srila Prabhupada,” and you sagely corrected him, “sufferers,” and we all grinned at each other.

Sometimes we anchored in coral reef bays and played water sports in tranquil waters. We would sooth our parched desert-like tongues with the flow of the nectarine Ganges waters of Lord Caitanya’s transcendental pastimes. In those transcendental lagoons were lotus flowers of singing, dancing and loud chanting of Krishna’s holy name, our only abode of transcendental pleasure. All the devotees were like swans, ducks and bees, as the ever-flowing Ganges water of harinam-sankirtan produced a melodious sound that gladdened our ears. Sometimes we held great festival days with huge colorful tents and lavishly decorated boats, headed up by your stalwart devotees, Jayananda Prabhu and Visnujana Swami. Sometimes, we would get distracted by the monkeys swinging in the trees, and you would always save us from such monkey business with your nectarean instructions.

And then all powerful Kala wielded His razor sharp revolving disc, and our merry sailing eventually came to naught. The storm squalls came, tyrannous and strong, chasing us down along, down into ice cold dooms of stagnation. As we would read in your eternal books, “Everyone is sleeping in the darkness of Kaliyuga, but when there is a great acharya, by his calling only, everyone takes to the study of the Vedas to acquire actual knowledge,” and you said that when that great acarya leaves the planet, then chaos ensues, and so that came to pass.

That great storm hit full force, and some slipped and fell out into the dark waters. Then a great calm ensued and a dark overcast shrouded the sky. Engulfed in dense darkness, we huddled down below deck, our frames trembling, while the omen-bearing Albatross lay lifeless on deck. We were struck down, dead in the water, idle as some painted ship on a painted sea. There was heard a faint peg-leg tapping, marking time on the deck, and someone faintly whispered “Ahab.” And someone else said, “illusory whales.” A faint flickering apparition of some yellow-stool Doubloon caught our eyes, and many a rumor harkened of the harbinger of death, the white monster of the sea, who could destroy an entire ship with a single blow. You always said that destruction can only come from within. And so fear and trembling overcame us running, as we forgot your blessed vani and your dear Lord Sri Krishna too many times, and the Albatross of ill-luck hung round our necks.

Then the golden forms of Lord Caitanya and Lord Nityananda came dancing across the path of our weary eyes, the two brothers shining as brilliant as the moon and sun rising simultaneously on the eastern horizon, chasing away all darkness from our hearts. And then you appeared again as the two Bhagavatas, the book Bhagavata and the person Bhagavata, and you and your books once again illumined our collective hearts, and we took courage to man the ship and plough on through the darkness, steering out for the dawn of light once again. Again to man the life boats and lifesavers, again pulling aboard drowning souls, again the bird o’ luck flew, and again your life-breath filled our lungs, and again we saw you Srila Prabhupada as our eternal captain and dearmost friend. Again sacred service you gave. Again we all proclaimed in loud voices singing, Jai Srila Prabhupada, Jai Srila Prabhupada, all glories unto you, all glories unto you, our eternal captain of the ship, Jai Jai Srila Prabhupada, all glories to you, all glories to you!