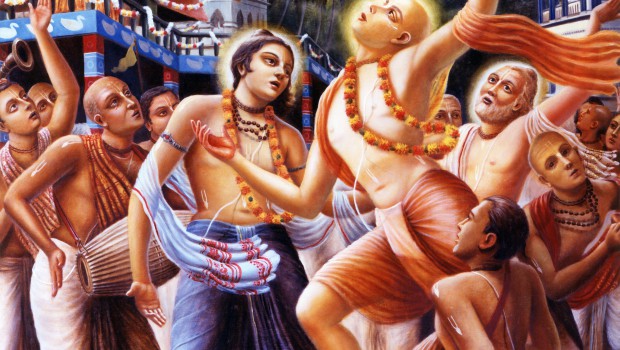 Vakresvara Pandita, the fifth branch of the tree, was a very dear servant of Lord Caitanya’s. He could dance with constant ecstasy for seventy-two hours. (Adi 10.17)

In the Gaura-ganoddesa-dipika, verse 71, it is stated that Vakresvara Pandita was an incarnation of Aniruddha, one of the quadruple expansions of Visnu (Vasudeva, Sankarsana, Aniruddha and Pradyumna). He could dance wonderfully for seventy-two continuous hours. When Lord Caitanya Mahaprabhu played in dramatic performances in the house of Srivasa Pandita, Vakresvara Pandita was one of the chief dancers, and he danced continuously for that length of time. Sri Govinda dasa, an Oriya devotee of Lord Caitanya Mahaprabhu, has described the life of Vakresvara Pandita in his book Gaura-krsnodaya. There are many disciples of Vakresvara Pandita in Orissa, and they are known as Gaudiya Vaisnavas although they are Oriyas. Among these disciples are Sri Gopalaguru and his disciple Sri Dhyanacandra Gosvami. (Adi 10.17)

The Gandharvas, who are residents of Gandharvaloka, are celebrated as celestial singers. Whenever singing is needed in the celestial planets, the Gandharvas are invited to sing. The Gandharvas can sing continuously for days, and therefore Vakresvara Pandita wanted to dance as they sang. (Adi 10.19)

The three brothers Govinda, Madhava and Vasudeva Ghosa all belonged to a kayastha family. Govinda established the Gopinatha temple in Agradvipa, where he resided. Madhava Ghosa was expert in performing kirtana. No one within this world could compete with him. He was known as the singer of Vrndavana and was very dear to Sri Nityananda Prabhu. It is said that when the three brothers performed sankirtana, immediately Lord Caitanya and Nityananda would dance in ecstasy. According to the Gaura-ganoddesa-dipika (188), the three brothers were formerly Kalavati, Rasollasa and Gunatunga, who recited the songs composed by Sri Visakha-gopi. The three brothers were among one of the seven parties that performed kirtana when Lord Sri Caitanya Mahaprabhu attended the Ratha-yatra festival at Jagannatha Puri. Vakresvara Pandita was the chief dancer in their party. This is vividly described in the Madhya-lila, Chapter Thirteen, verses 42 and 43. (Adi 10.115)

Among the devotees who accompanied the Lord in Jagannatha Puri, two of them–Paramananda Puri and Svarupa Damodara–were the heart and soul of the Lord. Among the other devotees were Gadadhara, Jagadananda, Sankara, Vakresvara, Damodara Pandita, Thakura Haridasa, Raghunatha Vaidya and Raghunatha dasa. (Adi 10.124-126)

In Jagannatha Puri Lord Caitanya lived at the house of Kasi Misra, who was the priest of the king. Later this house was inherited by Vakresvara Pandita and then by his disciple Gopalaguru Gosvami, who established there a Deity of Radhakanta. The Gaura-ganoddesa-dipika (193) states that Kasi Misra was formerly Kubja in Mathura. Pradyumna Misra, an inhabitant of Orissa, was a great devotee of Lord Caitanya Mahaprabhu. Pradyumna Misra was born of a brahmana family and Ramananda Raya of a non-brahmana family, yet Lord Caitanya Mahaprabhu advised Pradyumna Misra to take instruction from Ramananda Raya. This incident is described in the Antya-lila, Chapter Five. (Adi 10.131)

While kirtana was going on, there was a transformation of ecstatic love and much tears, jubilation, trembling, perspiration and deep resounding in the body of Sri Caitanya Mahaprabhu. Upon seeing this transformation, all the people present became very much astonished. The tears from the eyes of the Lord came out with great force, like water from a syringe. Indeed, all the people who surrounded Him were moistened by His tears.

There were multifarious trees and creepers in the garden, and they were all jubilant to see Sri Caitanya Mahaprabhu. Indeed, the birds were chirping, the bees were buzzing, and a cool breeze was blowing.

After thus performing pastimes in the garden for some time, they all went to a lake called Narendra-sarovara and there enjoyed sporting in the water.

Haridasa Thakura said, “I have had one desire for a very long time. I think that quite soon, my Lord, You will bring to a close Your pastimes within this material world. “I wish that You not show me this closing chapter of Your pastimes. Before that time comes, kindly let my body fall down in Your presence. I wish to catch Your lotuslike feet upon my heart and see Your moonlike face. With my tongue I shall chant Your holy name, ‘Sri Krsna Caitanya!’ That is my desire. Kindly let me give up my body in this way. O most merciful Lord, if by Your mercy it is possible, kindly grant my desire. Let this lowborn body fall down before You. You can make possible this perfection of all my desires.”

Sri Caitanya Mahaprabhu said, “My dear Haridasa, Krsna is so merciful that He must execute whatever you want. But whatever happiness is Mine is all due to your association. It is not fitting for you to go away and leave Me aside.”

Catching the lotus feet of Sri Caitanya Mahaprabhu, Haridasa Thakura said, “My Lord, do not create an illusion! Although I am so fallen, You must certainly show me this mercy! My Lord, there are many respectable personalities, millions of devotees, who are fit to sit on my head. They are all helpful in Your pastimes. My Lord, if an insignificant insect like me dies, what is the loss? If an ant dies, where is the loss to the material world? My Lord, You are always affectionate to Your devotees. I am just an imitation devotee, but nevertheless I wish that You fulfill my desire. That is my expectation.”

Because He had to perform His noon duties, Sri Caitanya Mahaprabhu got up to leave, but it was settled that the following day, after He saw Lord Jagannatha, He would return to visit Haridasa Thakura.

Haridasa Thakura made Sri Caitanya Mahaprabhu sit down in front of him, and then he fixed his eyes, like two bumblebees, on the lotus face of the Lord. He held the lotus feet of Sri Caitanya Mahaprabhu on his heart and then took the dust of the feet of all the devotees present and put it on his head. He began to chant the holy name of Sri Krsna Caitanya again and again. As he drank the sweetness of the face of the Lord, tears constantly glided down from his eyes. While chanting the holy name of Sri Krsna Caitanya, he gave up his air of life and left his body.

Seeing the wonderful death of Haridasa Thakura by his own will, which was just like a great mystic yogi’s, everyone remembered the passing away of Bhisma.

One Response to Who Is Vakresvara Pandita?