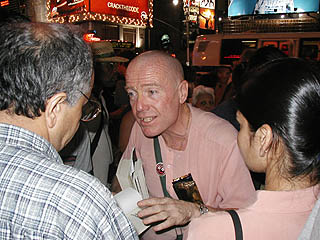 Why is the Crime Rate Falling in New York City?

The experts can not work out why the crime rate in NYC is falling dramatically while even Brooklyn and Queens crime rates remain the same and all other large cities crime rates are rising. But Madhusudana Prabhu knows what is happening. Over the past three years the distribution of Srila Prabhupada’s books in NYC has increased dramatically…

[from BBC] New York’s violent crime rate has continued to fall, bringing it down to a level not seen since the 1960s. According to statistics from the New York Police Department the murder rate in the city between 1 January and 17 March is nearly 40% lower than it was for the same period last year.

Crime rate drops Citywide homicide rate down 39.7% Overall violent crime rate down 7.9% Citywide 85 people were murdered in the period and in Manhattan only 11 homicides were reported, compared with 28 last year.

The fall has occurred despite a cut in police overtime and the fact that many officers have had to be redeployed to meet anti-terrorism demands.

The dramatic decline has lowered crime rates in the city to a level not seen since the early 1960s.

The trend means that life in the outer boroughs of Brooklyn, Queens, the Bronx and Staten Island, where the majority of New Yorkers live, is now more dangerous than Manhattan.

Manhattan, which attracts the vast majority of tourists to the city, used to be notorious for its muggers, drug-dealers, gangsters and murderers.

Last year there were 101 murders in Manhattan, excluding the 2,830 people recorded as killed in the 11 September attack on the World Trade Center.

The fall in crime has not been repeated elsewhere: in many other large cities including Atlanta, Boston and Los Angeles, crime figures have risen again as the economy has flagged.

It’s very puzzling. There ought to be a blue ribbon commission of experts to look into it

Andrew Karmen Crime expert New York’s much lauded zero-tolerance policy on crime is being held up as a major reason for the city’s success.

Another initiative has focused police efforts on combating petty so-called “quality of life crimes”, such as shoplifting and fare dodging.

The theory is that people who commit petty crimes eventually graduate to more violent offences.

But crime expert Andrew Karmen from John Jay College of Criminal Justice in Manhattan said there was no clear explanation for the crime rate continuing to fall.

“It’s very puzzling. There ought to be a blue ribbon commission of experts to look into it,” he said.