Now things hav..." /> Why Our Schools Don't Have a Prayer [Prabhupada Speaks Out] | Krishna.org
Education 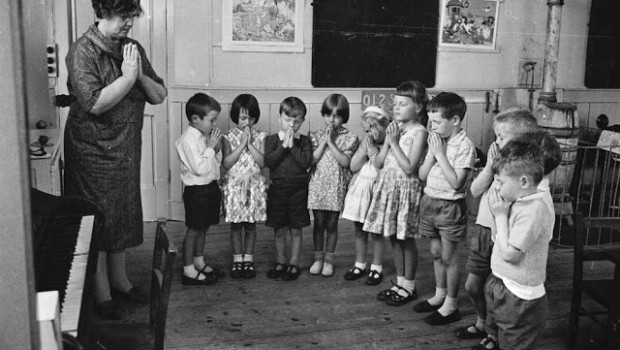 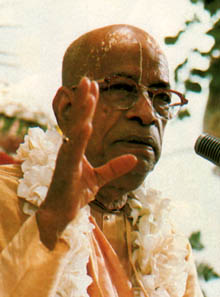 Now things have gotten to the point that we can’t even have prayer in the public schools. We used to have a prayer at the beginning of each school day. But then one atheist lady (and no doubt other people behind the scenes) pushed and pushed until the Supreme Court declared it unconstitutional. Now prayer in the schools is banned.

This exchange between His Divine Grace A. C. Bhaktivedanta Swami Prabhupada and a divinity student took place in Los Angeles, during January of 1974.

Student: Many people are frightened about the way the schools are failing apart … students not even learning how to read and write, many turning to drugs and robbing and raping their teachers.

Srila Prabhupada: Yes. What is the value of this kind of schooling?

Student: Not an awful lot.

Srila Prabhupada: It is all cheating. You have left God out. That is the height of cheating. So naturally the rest of your so-called schooling must also be cheating.

Suppose you are doing a mathematical calculation and you start by figuring, “2 + 2 = 3.” After that you may use the most sophisticated techniques and formulas, but your whole calculation will be wrong.

Student: Now things have gotten to the point that we can’t even have prayer in the public schools. We used to have a prayer at the beginning of each school day. But then one atheist lady (and no doubt other people behind the scenes) pushed and pushed until the Supreme Court declared it unconstitutional. Now prayer in the schools is banned.

Srila Prabhupada: But even if prayer were allowed, that would not help. Prayer is still going on in the churches, and what is the benefit? People are losing interest, because it has all become simply a ritualistic show–“Churchianity.” The thing is, you have to become educated in the science of God. You must have direct, scientific experience of God. People aren’t interested in dry words. They have become scientific-minded; they want results.

Student: Well, most people still have a sentimental attachment to God, so most likely they would like to see at least a semblance of prayer in the schools …

Srila Prabhupada: No. Do something practical! “Prayer” means chanting the holy name of the Lord. If you don’t know the holy name of the Lord, we are giving it. You’ll have no expenditure, and no loss. So why don’t you try this? Chant Hare Krsna. And if you actually chant Hare Krsna, you will get scientific, realized knowledge of God–direct, personal experience of God. Then everything beneficial will follow for society.

Student: Yes. But, you see, right now you can’t chant Hare Krsna in the schools. That law is still there on the books. You can’t chant until somebody changes the law.

Srila Prabhupada: So my disciples can do that.

Student: They should try to fight the law?

Srila Prabhupada: Yes. Just recently I heard that the senators and congressmen have set aside one special day each year for public prayer. Just one day–but they still want prayer. So if they actually want prayer, why are they prohibiting it all the rest of the year? Just see the contradiction! They have banned prayer because of their inexperience. And now they are experiencing, “This does not help us.” Otherwise, what is the use of introducing prayer again? They have experienced that without prayer things have failed. That is a fact.

Student: You were saying earlier that fifty to sixty percent of the senators and congressmen are lawyers…

Srila Prabhupada: Yes, and nowadays “lawyer” means cheater. One who can tactfully break the law–he is a good lawyer. They will find some flaw in the letter of the law so that they can avoid the spirit of the law.

Student: Actually, to ban prayer in the schools they had to avoid the whole point of the First Amendment–that “Congress shall make no law prohibiting the free exercise of religion.” They said a prayer might trample an atheist’s right not to pray.

Srila Prabhupada: So now the children cannot have a prayer in their schools. These government men are mostly lawyers, cheaters. Like Nixon. What is the situation now?

Student: Well, he couldn’t get any less popular; so now he’s getting more popular. People forget.

Srila Prabhupada: People have become cheaters, and that is why they elect such cheaters as their representatives. You Americans can make all the propaganda you want, but you will not be happy without offering prayer to God.

Srila Prabhupada: But be scientific. To begin with, follow God’s laws and lead a pure life: no illicit sex, no meat-eating, no intoxication, no gambling. If you reinstate prayer in the schools, that is not bad; but unless you first become pure, your prayer will have no practical effect. You yourselves must be free from all these impure activities. Then from among yourselves you can elect a good leader. If you really want a good leader, then you yourselves must become good. And you can become good by offering prayer to God.

Student: Forgive me, but this sounds like we’re getting into some sort of vicious circle. A moment ago you said we have to become pure or good first … otherwise our prayer will have no effect. So now how can you say we can become good by offering prayer?

Srila Prabhupada: Not just any kind of prayer. “Prayer” means that you chant the name of God. If you simply chant Hare Krsna, you will be in touch with God–the all-good. And then naturally you will become good. Why don’t you try it?

Student: We have little more to lose.

Srila Prabhupada: But if you chant Hare Krsna, you will be the gainer. Just chant and see the result.

Tags: constitution, Prabhupada Speaks Out, prayer in schools, US, USA