Browsing the "Prabhupada Speaks Out" Tag

Advancement of knowledge means how to enjoy sex. How to take shelter of abortion--child killing. The whole thing is on the basis of sex. That's all.

America Has to Stop Demonism [Prabhupada Speaks Out]

Your leaders do not see the sameness of their demonism and the communists' demonism. America has to stop demonism then you will be the leaders of the world. 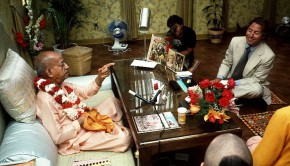 You are wearing a crucifix yet that sign actually means you killed Christ. The crucifix is the symbol that you so-called followers of Christ killed Christ