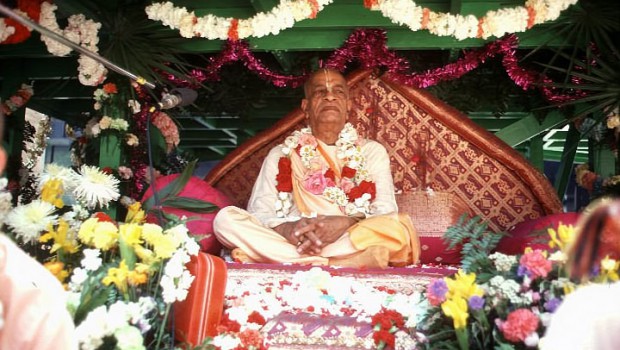 Here we conclude an exchange that took place between His Divine Grace A.C. Bhaktivedanta Swami Prabhupada and some of his disciples, during a morning walk in Denver, Colorado, on June 28, 1975.

Srila Prabhupada: Until these world leaders read my books and take to this Vedic culture, what kind of civilization will they have? Dog race. Horse race. They want this. Rat race. That’s all. Their civilization is a race. Dog race. Horse race. Rat race. The citizens do not know anything about this great science of the soul. Modern civilization means that people are simply becoming rascals, animals. Of course, strictly speaking, theirs is a motor race. They have advanced beyond the common dog race to a motor race. But if a doggish person is running not on four legs but on four wheels, does that mean he is not a dog? It is the same race. The same race–whether by running on four legs or on four wheels. The race is the same, and the dog is the same.

So this civilization is a glorified dog race. Modern man does not know, “I may feel proud of racing around in a car, but is there any value if I do not understand the meaning of my life?” Hmm? So this is going on. A big, big highway for dog racing–that is modern civilization.

And when rascal yogis and swamis present their version of the Vedic culture, they say something like, “By this transcendental meditation you will keep your dog race very nice.” In reality, these yogis and swamis are bewildered by this materialistic civilization. “Oh, very nice. It is very nice.” That’s all. In Bhagavad-gita Krishna describes such personalities. Mohitam nabhijanati mam ebhyah param avyayam: “Bewildered by the modes of material nature, fools and rascals do not know Me, who am above the modes and inexhaustible.” The modern world is filled with such mudhas, rascals. So, again, the only hope is that you distribute my books as much as possible.

In London there is a big stadium for dog racing. Do you know that? Many people go to see the dogs race.

Disciple: We’ve gone there, too, Srila Prabhupada, to distribute your books.

Srila Prabhupada: In Australia, also–Sydney–oh, they are very fond of dog racing. Many men take their big dogs for racing.

Disciple: It makes for good gambling. 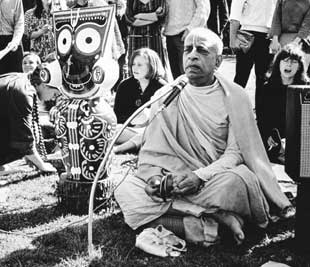 Srila Prabhupada: And in Europe, being aristocratic means keeping many horses and many dogs. That is aristocracy. The aristocrats ride on horses, and taking their dogs, they go to the forest and kill some innocent birds. This is the extent of their heroic activities. [To a Disciple:] Do you remember that palace we went to see in France?

Disciple: Yes. In the hallway they had many pictures of aristocrats killing birds and foxes. Pictures to memorialize these great personalities and their heroic activities.

Srila Prabhupada: In Paris we saw a huge statue of Napoleon. And we recalled Napoleon’s boast, “I am France.” France is still there, but there is no Napoleon. [Laughter.] Napoleon, finished. Hitler, finished. Gandhi, finished.

Disciple: Srila Prabhupada, in the same place where we saw that statue of Napoleon, formerly there had been another statue, one of Louis XIV. Napoleon pulled that one down and replaced it with his own statue.

Srila Prabhupada: And some day someone else will come and replace Napoleon’s statue. For instance, in Karachi they have pulled Gandhi’s statue down.

Nothing in this material world will stay. So always chant Hare Krishna. This is a very dangerous place. Padam padam yad vipadam: This is a place where at every step there is danger. Right now, for example, we are walking in a very nice park, but at any moment there may be a revolution and the whole thing may change. The whole thing may become like fire, just as it has now become in India. So we should remember that here in this material world, padam padam yad vipadam: At every step there is danger.

Therefore, give up your attachment for this place. That is real intelligence. And yet the modern educational system is misleading people into maya-sukhaya: making gorgeous plans for temporary happiness. That’s all. If in the slaughterhouse the animals are kept very comfortably, what is the meaning of it?

Disciple: A slaughterhouse is a place where many animals are sent to be killed brutally.

This place is a slaughterhouse. And yet the foolish two-legged animal is thinking, “I am now very comfortably situated.” He forgets, “I am going to be slaughtered.” Mrtyu-samsara-sagarat: “This place is an ocean of slaughter.” In Bhagavad-gita Lord Krishna confirms it–mrtyu-samsara-sagarat. This place is a slaughterhouse. But people are accepting it as their home. Another name for this material world is mrtyu-loka. Mrtyu-loka–“the place of death.” But still, they are taking it as a very comfortable place. This is their intelligence: accepting a slaughterhouse as a very nice place. When you point these things out to these animals who are going to be slaughtered, how do they respond?

Disciple: Well, Srila Prabhupada, just a few days ago, in New York, a lightning bolt struck an airliner and sent it crashing down onto a big highway. A ghastly, horrifying scene, with hundreds of people screaming in agony as they lost their lives. After that, I was passing out your books at the Denver airport and mentioning, “How about that New York crash? Seems any of us could die at any moment, you know?”

But most people in the terminal looked up from their cushy chairs and said, “Oh, I’ve got my whole life in front of me.” Things like that. “I’m just devoting my attention to getting ahead. I’m enjoying my life far too much to start indulging in that kind of negative thinking.”

Disciple: Srila Prabhupada, in your lecture the other day in Los Angeles, you said that when a great war happens, with many people killed, it has been arranged by the Supreme. As in the battle of Kuruksetra.

Srila Prabhupada: Yes. Krishna states that fact to Arjuna. “You are feeling intense affection for your family members, even though they are trying to usurp your kingdom by mounting a massive attack. You are thinking, very nobly, that you do not wish to kill your family members.

But it is already settled. They must be killed here. I have brought them. You may kill them or not kill them–they will be killed. That is My plan. If you want, you may take credit that you have been victorious in the battle.”

Wasn’t that true even during the battle of Kuruksetra?

Srila Prabhupada: Well, during the battle of Kuruksetra, all five Pandava brothers were saved. When the battle was over, all five brothers remained. So when there is a war, it is not that all the devotees are saved, but mostly they are saved. And more importantly, Krishna assures,

“Upon giving up this body, those who know the transcendental nature of My advent and activities never return to this miserable and temporary material world. Rather, they come back home to Me.”