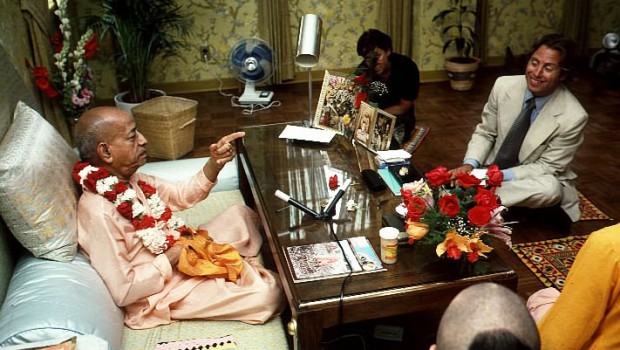 For example, the animal killing. The Western people mostly call themselves Christians. Now, Lord Jesus Christ said, Thou shall not kill. But the result, after the passage of two thousand years, is that the people of the Western countries are still killing. So, during all these years, when have they actually accepted Christianity? What is your answer?

This exchange between His Divine Grace A.C. Bhaktivedanta Swami Prabhupada and Carol Cameron, then a master’s candidate in anthrophology, took place in Perth, Australia, on May 9, 1975.

Disciple: Srila Prabhupada, this is Carol Cameron, from the University of West Australia. For her master’s degree in anthropology, Carol is writing a paper about the influence of the Vedic culture on the West.So she would like to ask you some questions.

Srila Prabhupada: Yes.Not long ago I was speaking about that. Of course, I spoke in very strong words.What I said was, “Western people are claiming to be very civilized, but I have got an objection.That is why I have come to the West.”

For example, the animal killing.The Western people mostly call themselves Christians. Now, Lord Jesus Christ said, “Thou shall not kill.”But the result, after the passage of two thousand years, is that the people of the Western countries are still killing. So, during all these years, when have they actually accepted Christianity? What is your answer?

Srila Prabhupada: Just consider.The Ten Commandments and then Lord Jesus Christ and his disciples had to tell these people, “Thou shall not kill.”So, first of all, what kind of men were they–that Lord Christ had to request them not to kill? That means they were killers.

A naughty child is disturbing everyone.So I am forced to say, “My dear child, please don’t disturb everyone. “Similarly, when Christ said, “Thou shall not kill,” that means he was speaking amongst people who were in the habit of killing.Is it not?

Srila Prabhupada: Now, after taking instruction from Christ, first of all they killed Christ. That means they could not understand the instruction.Therefore, their first business was to kill the instructor. And following that, two thousand years have passed–and still they are killing. So, since when have they accepted the teachings of Lord Christ? Can you answer this?

Carol: So you think the Christian faith hasn’t been reflected in the behavior of Western people?

Srila Prabhupada: This is obvious.You are maintaining huge slaughterhouses–regular killing. So although you took instruction from Christ–“Thou shall not kill”–you first of all killed him, and still you are maintaining this killing business.You are killing the animals, and every now and then, you are declaring wars amongst yourselves.

So the killing business is going on regularly. Not just in big wars but also in your regular, daily life.You are maintaining big, big slaughterhouses.So, again, since when have you Westerners actually accepted the instructions of Christ?That I want to know.What is that date?

Carol: Your Divine Grace, do you see any hope for the world? We seem to be moving towards destruction.

Disciple: Srila Prabhupada is asking you, When did this civilization actually accept the teachings of Christ?

Srila Prabhupada: Then why are you claiming that you are Christian? For instance, you are wearing a crucifix. You Westerners often keep or wear a crucifix, yet that sign actually means that you killed Christ. The crucufix is the symbol that you so-called followers of Christ killed Christ. Many, many people in the priestly order carry the cruifix. The crucifix is the sign that Lord Jesus Christ was killed. Is it not?

Carol: It is, but that symbol is also used to signify his triumph, or resurrection.

Srila Prabhupada: [Warily:] Maybe. [Laughter.] But mainly, that symbol shows how you killed Lord Jesus Christ. That is the sign. That reminds you that you killed your spiritual master. You accuse the Jewish people–“They killed him”–but you also killed him, and you are still killing. Although, of course, you like to call yourselves Christian.Therefore, I want to know‑‑you are a learned scholar‑‑since when did you start abiding by the order of Lord Jesus Christ? That is my question. Since when?

Carol: When did I?

Srila Prabhupada: Every one of you–throughout the Western countries. And if you claim you have actually abided by the order of Jesus Christ, then why you are systematically killing? The order is, “Thou shall not kill.”

Carol: This matter reminds me of the Gita, you know?–where Arjuna is on the battlefield, about to commit an organized sort of killing against his relatives.

Two thousand years have passed, but to date you have not been able to not accept the instruction of Lord Jesus Christ. And you are all claiming that you are Christian. But since when did you accept Christianity? That is my question. Because as far as I can see, you have disobeyed the order of Christ. So, now that two thousand years have passed, when did you accept? Hmm? Who will answer this question?

Carol: Hmm.Your Divine Grace, what is the main part of your philosophy? Is it based on the Vedanta?

Carol: I think it is a question of love.

Srila Prabhupada: Yes. You Westerners have no love. You cannot understand the basic principle of life and morality, Jesus Christ’s instruction that “Thou shalt not kill.” So how can you become a philosopher?

Carol: How is the question of love to be understood? Between people or through some sort of inner communication with a higher self?

Disciple: Srila Prabhupada is saying that until we Westerners accept Christ’s simplest, most basic instruction, we cannot talk of philosophy. Nor can we talk of love.

Srila Prabhupada: You Westerners have no love, because you are accustomed to kill. Philosophy begins when you know that everyone is part and parcel of God, and everyone should be given the full facilities to live, without danger of being injured for anyone else’s personal benefit. Panditah sama‑darsinah: A pandita, a true philosopher or learned scholar, sees every living being equally–as a spirit soul, part and parcel of God. So fools and rascals can not become philosophers. Those who are learned scholars–thoughtful–they can become philosophers. But if one has no knowledge how to behave with other living entities, what is the meaning of his becoming a philosopher?

5 Responses to Since When Have You Westerners Accepted the Teachings of Christ?