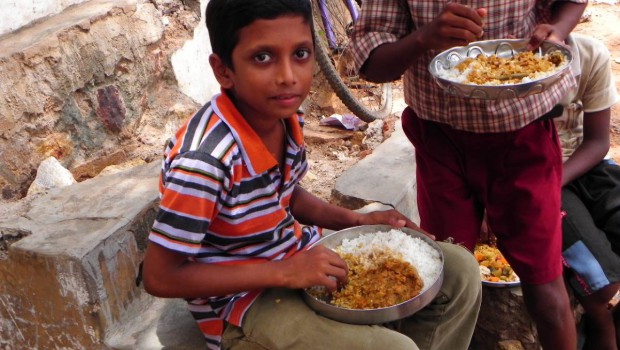 The scheme involves ISKCON Bangalore providing mid-day meals for children in government schools in the rural areas of Bangalore city. 30,000 schoolchildren everyday will be provided nutritious meals consisting of rice, sambar with vegetables and curds–all blessed by Lord Krishna!

ISKCON Bangalore has launched the largest private initiative to support rural schoolchildren in the whole of India. The program was inaugurated at a special ceremony by the Government Cabinet Minister Dr. Murali Manohar Joshi, on November 11th, 2000 at 4.00pm, who flew down to Bangalore especially from Delhi for the launch. The scheme involves ISKCON Bangalore providing mid-day meals for children in government schools in the rural areas of Bangalore city. 30,000 schoolchildren everyday will be provided nutritious meals consisting of rice, sambar with vegetables and curds – all blessed by Lord Krishna! A special kitchen facility has been constructed in the ISKCON temple premises to cook food for 30,000 students at a time. A specially built truck will transport food cooked in the temple to about 40 schools in the outskirts of Bangalore city. This program will involve cooking, transporting and distributing 16,650 kgs of food everyday. The program will cost ISKCON Bangalore $100,000 a month to maintain, funds which have already been pledged by donors. Though ISKCON has fed large groups of people in the past, the scale of this program is unprecedented in ISKCON’s history, in that this is the first time that such a large prasadam distribution program has been inaugurated to operate *continually on a daily basis for many years to come* – this will not just be a one-off feed on a festival day. Rather a minimum of 30,000 of the most underprivileged children will now become hunger-free for life. Indeed the theme of this program is:

Thus this is only the beginning. The aim is to eventually feed all 250,000 schoolchildren in Government schools in Bangalore City. In this way a whole generation of children will now grow up having been fed largely only on Krishna Prasadam. And for every child that is fed, their whole household automatically becomes appreciative of the service being rendered, and therefore more open to Krishna Consciousness. In this way gradually the whole City will become “Krsna-ised”! So this innovative program is actually enabling a mini-revolution to take place in terms of expanding the preaching.

Madhu Pandit Das, the Secretary of the IRM (ISKCON Revival Movement) and the brains behind the project explains that this is not purely just a humanitarian effort, but is actually part of Srila Prabhupada’s plan to conquer the whole world. He said that the idea for this program was inspired directly from the following letter from Srila Prabhupada:

“Now I am especially concerned to distribute grains, rice, wheat in the form of dahl and rice prasadam to hungry people all over India. The people here are very disturbed because, partly due to the punishment of Nature, and partly due to the mismanagement of the demon class of men, food is not available. If the people do not even have sufficient food they will not even be able to receive spiritual instructions. So I am hopeful that if we can widely distribute free foodstuffs to the people of India, by giving it out at our centers as well as by travelling parties to villages, we will win over the whole country and the whole world by this activity on Krsna’s behalf . (Letter To Satyahit, 16th March, 1974)

And Srila Prabhupada’s plan is working! Madhu Pandit Prabhu explains that the goodwill generated towards ISKCON by this program has been phenomenal. Just at the launch, over 60 representatives from the international. national and local media came to cover the event including CNN and Doordarshan, which is India’s National TV Channel. Government sources have indicated that if this program is successful they are ready to assist ISKCON unlimitedly to feed the school-children all over India. International relief agencies are also watching the success of this scheme closely to see how they can involve ISKCON in extending this program world-wide. Indeed 2 days before the launch of this program, the President of the World Bank, James D. Wolfensohn, stated at a meeting in Bangalore that if the city was keen to help the poorest of the poor, then the World Bank was ready to offer all assistance.

To convey the impact of this program, we see no more fitting way to end, then by leaving you with the following personal message of support which was sent to Madhu Pandit by the Prime Minister of India, His Grace, Sriman Atul Behari Vajpayee:

“I am highly pleased to know that the International Society for Krishna Consciousness (ISKCON) Bangalore is launching ‘Akshaya Patra’ – a mid-day meal programme for children in government-run schools in the rural areas of Karnataka’s capital on November 11, 2000. The scale of the programme – providing a nutritious meal consisting of rice, curds and sambar with vegetables to 30,000 students everyday – is truly impressive. This is service not only to God but also to the nation. Lack of adequate and nutritious food for children of poor families has a direct negative effect of their school attendance, their health condition, and their subsequent life as they grow up. However, it is not only their individual loss: it is also a loss to the nation and to mankind.

Making India hunger-free is one of our key national objectives. Paradoxically, even though our country has achieved record food production in recent years, a large number of our fellow-citizens still continue to suffer from hunger owing to their poor economic status and deficiencies in our food distribution system. Since the goal of ‘Food for All’ cannot be achieved solely with the government’s initiatives, it is necessary for social organisations to vastly increase their voluntary efforts.

The mass-feeding schemes run by religious establishments of various denominations can make a major contribution to the national effort by scaling up their current programmes. I am confident that ISKCON’s ‘Akshaya Patra’ programme will serve both as an inspiration and a practical logistical guide to other institutions interested in taking up such activities. I wish the programme all success. “