A person who accepts the path of devotional service is not ..." /> Devotees Get Everything Automatically | Krishna.org
Devotees 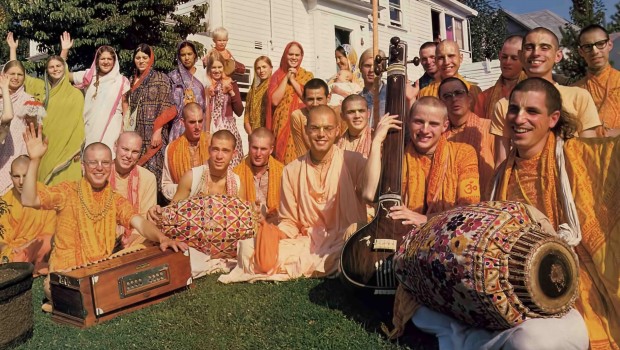 Devotees Get Everything Automatically

A person who accepts the path of devotional service is not bereft of the results derived from studying the Vedas, performing austere sacrifices, giving charity or pursuing philosophical and fruitive activities. At the end he reaches the supreme abode. (Bhagavad-gita 8.28)

This verse is a summary of the Seventh and Eighth Chapters, particularly as the chapters deal with Krishna consciousness and devotional service.

After the student studies the Vedas under the master for a period from five to twenty years, he may become a man of perfect character. Study of the Vedas is not meant for the recreation of armchair speculators, but for the formation of character. After this training, the brahmacari is allowed to enter into household life and marry.

When he is a householder, he also has to perform many sacrifices and strive for further enlightenment. Then after retiring from household life, upon accepting the order of vanaprastha, he undergoes severe penances, such as living in forests, dressing with tree bark, not shaving, etc.

By carrying out the orders of brahmacari, householder, vanaprastha and finally sannyasa, one becomes elevated to the perfectional stage of life. Some are then elevated to the heavenly kingdoms, and when they become even more advanced they are liberated in the spiritual sky, either in the impersonal brahmajyoti or in the Vaikuntha planets or Krsnaloka. This is the path outlined by Vedic literatures.

The beauty of Krishna consciousness, however, is that by one stroke, by engaging in devotional service, one can surpass all rituals of the different orders of life. A devotee automatically achieves the results derived from studying the Vedas, performing austere sacrifices, giving charity or pursuing philosophical and fruitive activities simply by accepting the process of devotional service. At the end he reaches the supreme abode.

One should try to understand the Seventh and Eighth Chapters of the Gita not by scholarship or mental speculation, but by hearing them in association with pure devotees.

Chapters Six through Twelve are the essence of the Gita. If one is fortunate to understand the Gita–especially these middle six chapters–in the association of devotees, then his life at once becomes glorified beyond all penances, sacrifices, charities, speculations, etc.

One should hear the Gita from the devotee because at the beginning of the Fourth Chapter it is stated that the Gita can only be perfectly understood by devotees. Hearing the Gita from devotees, not from mental speculators, is called faith.

Through association of devotees, one is placed in devotional service, and by this service Krishna’s activities, form, pastimes, name, etc., become clear, and all misgivings are dispelled. Then once doubts are removed, the study of the Gita becomes extremely pleasurable, and one develops a taste and feeling for Krishna consciousness. In the advanced stage, one falls completely in love with Krishna, and that is the beginning of the highest perfectional stage of life which prepares the devotee’s transferral to Krishna’s abode in the spiritual sky, Goloka Vrndavana, where the devotee enters into eternal happiness.

9 Responses to Devotees Get Everything Automatically