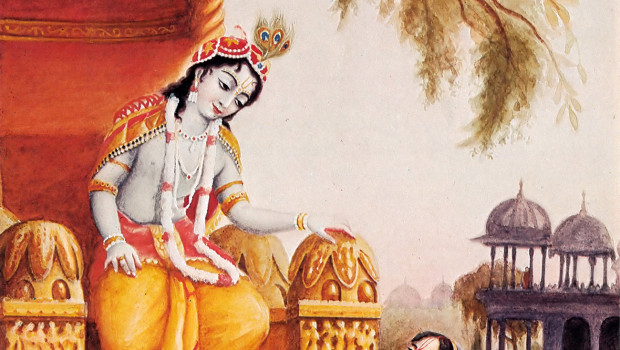 Krishna Can only be Seen by His Devotees

Often people ask why Krishna does not just appear in this world so everyone can see Him? It is a very interesting question and Krishna Himself explains this in Bhagavad-gita 7.25:

“I am never manifest to the foolish and unintelligent. For them I am covered by My eternal creative potency [yoga-maya]; and so the deluded world knows Me not, who am unborn and infallible.”

In the assembly of Kurus, when Sisupala spoke against Krishna being elected president of the assembly, Bhisma supported Him and proclaimed Him to be the Supreme God. Similarly, the Pandavas and a few others knew that He was the Supreme, but not everyone. He was not revealed to the nondevotees and the common man.

Therefore in the Gita Krishna says that but for His pure devotees, all men consider Him to be like themselves. He was manifest only to His devotees as the reservoir of all pleasure. But to others, to unintelligent nondevotees, He was covered by His eternal potency yoga-maya. So even when Krishna was present on this planet in Vrindavan in India five thousand years ago and was enjoying there with His cowherd friends and the gopis most people could not understand that He was the Supreme Personality of Godhead. Even the demigods like Lord Brahma and Lord Indra became confused and could not recognize Krishna as the Supreme Personality of Godhead.

In the prayers of Kunti in the Srimad-Bhagavatam (1.8.18) it is said that the Lord is covered by the curtain of yoga-maya and thus ordinary people cannot understand Him. Kunti prays: “O my Lord, You are the maintainer of the entire universe, and devotional service to You is the highest religious principle. Therefore, I pray that You will also maintain me. Your transcendental form is covered by yoga-maya. The brahmajyoti is the covering of the internal potency. May You kindly remove this glowing effulgence that impedes my seeing Your eternal form of bliss and knowledge.”

This yoga-maya curtain is also mentioned in the Fifteenth Chapter of the Gita. The Supreme Personality of Godhead in His transcendental form of bliss and knowledge is covered by the eternal potency of brahmajyoti, and the less intelligent impersonalists cannot see the Supreme on this account.

Also in the Srimad-Bhagavatam (10.14.7) there is this prayer by Brahma: “O Supreme Personality of Godhead, O Supersoul, O master of all mystery, who can calculate Your potency and pastimes in this world? You are always expanding Your eternal potency, and therefore no one can understand You. Learned scientists and learned scholars can examine the atomic constitution of the material world or even the planets, but still they are unable to calculate Your energy and potency, although You are present before them.”

So this is the nature of the material world. Krishna is present everywhere but the non-devotees can not see Him because He is hidden by the curtain of yoga-maya. So many so-called intelligent scientists will study this material world and although Krishna is right there in front of them they will not be able to see Krishna. But for His devotees this curtain of yoga-maya is lifted and Krishna becomes visible to them very easily.

53 Responses to Krishna Can only be Seen by His Devotees