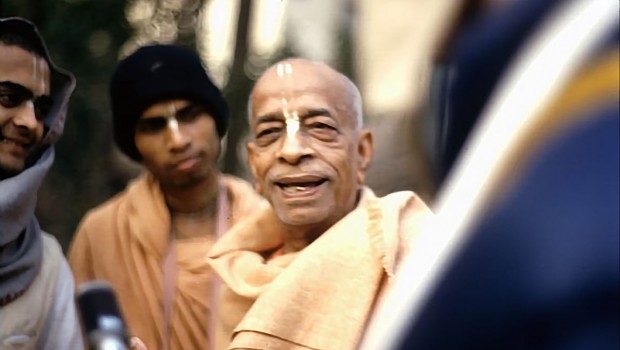 Published on May 8th, 2001 | by madhavananda-dasa | Full size image

Devotees of Srila Prabhupada from Krishna.org have formed a traveling sankirtana party. Four of us, Madhudvisa, Nimai Pandit, Sakshi Gopal and myself, Madhavananda, left from Manhattan last Friday in our Toyota motor home and headed for Boston.

We weren’t sure exactly where we would be going but when we arrived in Boston we were immediately directed to the Boston Commons near the temple on Commonwealth Ave. By His Divine Grace, we pulled into a super parking spot on jam-packed Newbery Street, a perfect place to distribute Srila Prabhupada’s books.

We have original Bhagavad-gitas and tons of small books like Perfect Questions, Perfect Answers and Easy Journey to Other Planets. Many people here in Boston are very curious and appreciative of our presence. During the Earthday Festival we chanted the Hare Krishna mantra with a loudspeaker through the riverside park where lots of people clapped, danced and chanted along.

On Sunday we visited the temple for the feast and met nice devotees who are dedicated to Prabhupada. We found some good spots for book distribution. Harvard Square turned out to be very nice. Many books were distributed followed by chanting of the Hare Krishna mantra in public. Bhakta Shaun joined us on Tuesday for enthusiastic chanting amidst crowds of people. Quite a few people approached us asking, “Where have you guys been?”

Altogether, the devotees are feeling inspired by this traveling program. Despite a few inconveniences we have managed to maintain a full morning program followed up by first-class prasadam prepared by Shaksi-gopala das. We found a perfect place to park where we can get water, use the rest room and get on the train to sankirtana.

We’ll be in Boston for a few more days and then see where Krishna and Srila Prabhupada take us next. Meanwhile, the Krishna.org website will be maintained by us while on the road using cellular and notebook technology.

Thanks for Building this Web Site! →

More Than Half A Million Hits for Krishna.org in March! →