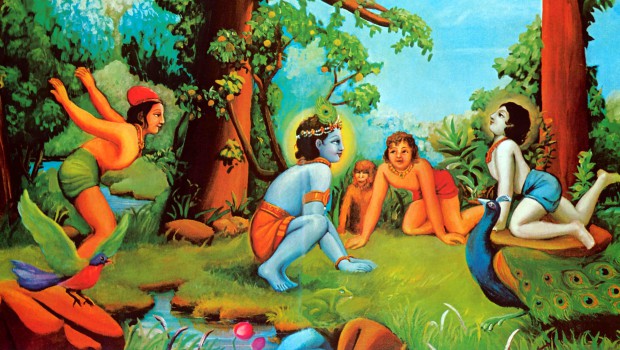 To control Krishna is not a very easy job; unless one is a great devotee, he cannot… Just like the cowherd boys. They used to rise on the shoulder of Krishna. Krishna was defeated in play.

So this verse… All the ladies of the palace… It is natural for ladies. When there is separation, they cry. So they were shedding tears, but Maharaja Yudhisthira asked them to stop, not to cry, because it may be inauspicious. Krishna was going home, and everyone should give Him farewell, a smiling face. But they could not do so. That was not possible. They were feeling so much of Krsna’s separation that they were crying, and Maharaja Yudhisthira asked them not to cry.

(reading:) “No one could make Lord Krsna stay at Hastinapura when He decided to start for Dvaraka, but the simple request of King Yudhisthira that the Lord remain there for a few days more was immediately effective. This signifies that the power of the King was loving affection, which the Lord could not deny. The almighty God (is) thus conquered only by loving service…” Krsna, although ready for going, still, Yudhisthira Maharaja stopped. And because Yudhisthira Maharaja is the elder cousin of Krsna and very exalted, pious king, could not…, Krsna could not refuse the order. (reading:) “The almighty God is thus conquered only by loving service, and nothing else.” Prayasa, prayaso ‘jita jito ‘py asi. Krsna is Ajita. Nobody can conquer Krsna. Nobody can order Krsna. Nobody can supersede Krsna. Nobody is greater than Krsna. Nobody is equal to Krsna. Nobody is (more) powerful than Krsna. Nobody is richer. Everything… Krsna is the Supreme Being. Therefore His another name is Ajita. Ajita means… Jita means conquered. Ajita means who is never conquered. Krsna had so many fights with the demons. Even in His childhood, the demons could not conquer over Krsna. Beginning from Putana, when He was only three months old, and up to the killing of so many other demons, Krsna was never defeated. That is the history. He was never defeated. Ajita. Therefore His name is Ajita. But Ajita becomes conquered. Ajita jito ‘py asi. Although Krsna is never conquered, still, you can conquer Him. How? Simply by becoming His beloved devotee.

Just like Bhismadeva. Bhismadeva is one of the recognized stalwart devotee of Krsna, mahajana, authority. Whatever Bhisma will speak on devotional service, that is authoritative. All the twelve mahajanas… Svayambhur naradah sambhuh kapilah kumaro manuh prahlado janako bhismah. So Bhisma wanted to conquer over Krsna. He promised. How he conquered, that you know, the story, that when Duryodhana showed some reluctance, that “My dear grandfather, you are not fighting with the Pandavas wholeheartedly because you have got affection for them. So you are on my side. You should fight wholeheartedly.” A little criticizing. So to, in order to please Duryodhana, Bhisma promised that “Tomorrow I shall kill all the five brothers. Is that all right?” ‘Yes, sir. Do that.” “So they cannot be saved unless Krsna breaks His promise.” Krsna said that… Both the parties were informed that “It is family fight. I cannot take part in the family. But I can divide Myself into two: My soldiers one side, and I am one side. But even if I am in one side, I’ll not fight.” So this was His promise, that He would not fight in the Battle of Kuruksetra. But Bhisma obliged Him to fight, to break His promise in order to save Arjuna. Therefore Bhisma conquered over Krsna, because He had to break His promise. Arjuna was in such a precarious condition that unless Krsna would take up the weapon to stop Bhisma, Bhisma was determined: “All right, let, let me kill my grandson.” So in battlefield, it was a great ocean of fighting, and Bhisma, Drona, Karna, they were compared with big, big sharks, crocodiles in the ocean. That was described by Pariksit Maharaja, that “Only for Krsna, my grandfather Arjuna was saved. Otherwise, it was impossible for my grandfather to conquer over the fight, to come out victorious. It is simply due to Krsna.”

So Bhisma conquered over Krsna. Instead of conquering over Arjuna, he conquered over Krsna. So similarly, here also, Maharaja Yudhisthira, he conquered over Krsna’s decision. If we become devotee of Krsna, then ajita jito ‘py asi. This is the statement of Lord Brahma, that Krsna can be conquered. Just like Yasoda-ma conquered over Krsna. That Damodara-stotra, you are reading, how Krsna was afraid of His mother. So any devotee can attain that stage, controlling Krsna by love and affection. There is no question… A devotee never likes to control over… They want to serve Krsna. This is also service. When a devotee conquers over Krsna or controls over Krsna, that is also service. That is not actually controlling, because Krsna wants to be controlled, just like a father sometimes says to his children, small children, to rise over the body, and they kick the father. And they… The father feels some relief. It is a kind of massaging. So similarly, everyone worships Krsna as the Supreme Being, and therefore Krsna wants sometimes to be, I mean to say, thought as insignificant subordinate. That is stated in the Caitanya-caritamrta, that “Everyone worships Me, but without worshiping, if somebody, I mean, controls over Me, I am very much happy.”

So to control over Krsna is not a very easy job; unless one is a great devotee, he cannot… Just like the cowherd boys. They used to rise on the shoulder of Krsna. Krsna was defeated in play. So the bet was that one who is defeated, he would take the other party on His shoulder. So Krsna became defeated.

Ittham satam brahma-sukhanubhutya dasyam gatanam para-daivatena: “And He’s the Supreme Person for the devotees.” Dasyam gatanam, those who have accepted to become the servant, eternal servant of Krsna. So for them, here is the Supreme Person. And mayasritanam nara-darakena: “Those who are under the influence of maya, they are seeing Krsna as ordinary human child, mayasrita.” And who are playing? Now, sakam vijahruh krta-punya-punjah They have come to this position so much so that they are rising on the shoulder of Krsna. How? Krta-punya-punjah. Punya-punjah, heaps of pious activities, many, many lives’. First of all, one has to understand Krsna after becoming very, very perfect.

Out of many millions of persons, somebody is interested in making this life perfect. Generally, the karmis, they do not know what is the perfection of life. Therefore it is said, manusyanam sahasresu kascid yatati siddhaye. They are being carried away by the waves of material nature.

Therefore Bhaktivinoda Thakura is warning, “My dear friends, why you are being carried away by the waves of this material ocean?” Mayar bose, jaccho bhese’, khaccho habudubu bhai. This is Vaisnava’s desire. Vaisnavah para-duhkha-duhkhi. Para-duhkha-duhkhi krpambudhih. So Vaisnava vision is different. Vaisnava vision is… He can see what is the position of these mayasritanam, those who have taken shelter of this maya, what is their position. Position is miserable. Duhkhalayam asasvatam. And they are being carried away by the waves. Today, one kind of body; tomorrow, another body; tomorrow or next life… So in this way the karmis are being carried away. So therefore, out of such millions of karmis, one becomes jnani. Jnani. Koti karmi madhye eka jnani srestha.

Caitanya Mahaprabhu has said that “Out of many, many karmis, one who is jnani…” Jnani means one who knows that “I am not this body. I am spirit.” But still, there is some mistake. They think that “I am the Supreme Spirit.” So ‘ham. Maya is so strong. Even after so much austerities, coming practically on the verge of perfection, they are misled by maya. This so ‘ham. So ‘ham means “I am the same.” But “I am the same” does not mean “I am the same Supreme.” “I am the same in quality.” So ‘ham does not mean that “I am as good as the Supreme Brahman.” It does not mean. Part is never equal to the whole. We are part of the Supreme Brahman. Mamaivamsah. So in quality, just like a small particle of gold is also gold–quality is the same. A small drop of sea water is the same quality, salty. But that does not mean the drop of sea water becomes the sea. The maya is so strong. Therefore Bhagavata says, “The impersonalists, Mayavadis, although they think that they have become one with the Supreme, but their intelligence is not yet complete.” Ye ‘nye, ye ‘nye ‘ravindaksa vimukta-maninah. They think like that: “Now we have become perfect, Narayana.” But Bhagavata says, “Sir, you may think like that, that you have become liberated, but you are not liberated because you are still in ignorance, because you are thinking one with the Supreme.” Avisuddha-buddhayah: “Your intelligence is not yet perfect.”

Therefore Krsna says, yatatam api siddhanam kascin mam vetti tattvatah. Siddha… Jnanis are siddhas. Yogis are siddhas. Although they are trying their best to become perfect, but still, they are missing Krsna on account of avisuddha-buddhi. And therefore aruhya krcchrena param padam tatah. Although, by austerities, they come to that platform of brahma-anubhava, Brahman realization, still, they fall down, anadrta-yusmad-anghrayah, on account of neglecting to worship the Supreme Personality of Godhead. So they cannot understand Him. Kascit. Krsna says, kascin mam vetti tattvatah, not that everyone, jnani, will understand. Even one is jnani, then he’ll take many births to understand Krsna. Bahunam janmanam ante jnanavan mam prapadyate.

So to understand God, the Supreme Being, who is controlling the whole universe, it is very, very difficult to understand Him. But if we become devotee, then Krsna reveals Himself. That is the… Then not only the devotee understands what is Krsna, but he attains the position that he can order over Krsna, he can control Krsna. This is devotee’s position. So why a devotee should aspire for merging into the effulgence of Krsna’s rays? They have got a different position. So we should try to become a devotee simply by service. You can become a perfect devotee simply by service. There is no other method. Bhaktya mam abhijanati. Bhakti means service, simply. That is bhakti. Sevonmukhe hi jihvadau. Simply the spirit, bhakti… Bhaktir uttama. Anukulyena krsnanusilanam bhaktir uttama. Anukulyena. Whatever Krsna orders, if you discharge that, that is bhakti, simply favorable to Krsna. Whatever Krsna says…

So Krsna says very simple thing, sarva-dharman parityajya mam ekam saranam vraja. If we become intelligent enough, then we fully surrender to Krsna. And Krsna says, man-mana bhava mad-bhakto mad-yaji mam namaskuru. We take up the principle, to think of Krsna always, twenty-four hours. Satatam cintayanto, kirtayanto mam. If you chant Krsna’s name, then satatam, twenty-four hours… That is possible. Just like Haridasa Thakura used to do. Then you think of Krsna without fail, and other things automatically come. Man-mana bhava mad… Who can devote so much time for thinking of…, unless he has become a devotee? So man-mana bhava mad-bhakto mad-yaji. And a devotee is always ready to worship Krsna, offer Him obeisances, however big he may be. In this way, we can attain this position of Maharaja Yudhisthira or Yasodamayi when Krsna, the Ajita, could be controlled, even by the devotee.