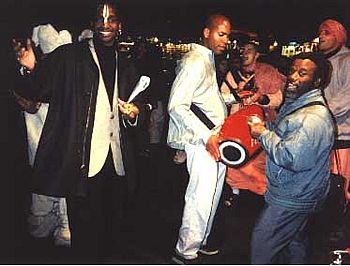 One mysterious man appeared who suddenly began following right behind the party with raised hands and shouts of joy, resounding and repeating loudly and boldly everywhere Halleluiah!!!, Lord Jesus Christ we thank you!!! Praise the Holy Name of the Lord !!!

On Saturday evening devotees of Prabhupada Sankirtan Society experienced completely blissful chanting and dancing in the streets of Manhattan. It began with only three of us, Bhakta Steven, Bhakta Gabriel and myself Madhavananda das. We chanted blissfully up Saint Marks Place with raised hands while spirit souls became awakened to their natural Krishna Consciousness.

I noticed that by keeping the mind fixed on Srila Prabhupada and purification of the atmosphere by resonation of the Holy Name, people were experiencing great happiness and appreciation for Sankirtan yajna. Continuing onwards to third Ave we passed by shops and restaurants where many spirit souls enthusiatically smiled, raising hands dancing and chanting along with the Mahamantra.

On this Saturday evening and the Halloween night before the sound vibration became tumultuous with chanting, cheering, ecstatic dancing and transcendental bliss. Halloween eve was as festive as ever. Kapindra Swami and Bhakta Gabriel handed out nice little prasadam packages of peanuts and raisins with orange mantra cards attached.

Prabhupada books and Hare Krishna Newsletters were flying out left and right. Youth dressed in variegated costumes danced until the cows came home, and the Holy Name was the top hit !

Then again on Saturday evening on the return route back down Saint Mark’s things really picked up when suddenly a whole crowd of 8 – 10 people caught on to the vibration and merged into the Sankirtan party increasing the chanting and dancing.

The event culminated in the appearance of one mysterious man who suddenly began following right behind the party with raised hands and shouts of joy, resounding and repeating loudly and boldly everywhere “Halleluiah !!!, Lord Jesus Christ we thank you !!! Lord Jesus Christ we thank you !!! Praise the Holy Name of the Lord !!! He joined in glorification all the way back to the temple where the kirtan finally had it’s grande finale with onlookers and our new friend chanting in Latin something in effect of “Jesus Christos spirituous sanctos benedictos” !!!

We all took it as a great personal blessing from Lord Jesus Christ himself. Saint Mark must be a great saint !