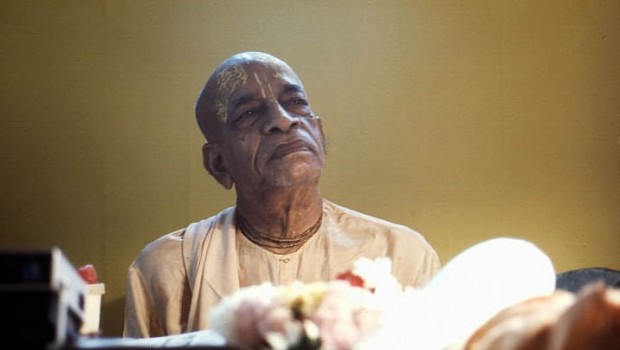 I was never separated from Srila Prabhupada, even though for many years I could not understand this, and thought that I alone had been rejected by Krsna, that I alone could not be a devotee, because Krsna didn’t want me, nor could I ever please my spiritual master. I couldn’t understand how I had gotten trodden down so far, spiritually, after such dedication to the process for so long.

Please accept my most humble obeisances!

The proof of the pudding is in the taste. Although I didn’t have the great mercy of being in ISKCON in the years you speak of, I was reading his books and applying the process to the best of my understanding since 1970. So when I first found out that temples existed in 1975, it took me a month before I made my first visit. As I stepped over the threshold of Kisora Kisori mandir, I felt myself lifted out of material existence and tasted the tangible ecstatic transcendental pudding of Srila Prabhupada’s process of Krsna consciousness. I never walked back out of that portal, and for years I thoroughly relished all the flavours of pudding I could get my hands on. And despite all my ups and downs in the subsequent years, I never went back to my former unhappy state.

Over time, I watched the external deterioration of the structure become covered over with clouds of ever darker, thicker and gruesome poison, due to offenses, individual and collective. Eventually I became personally covered over, even after many years of sincerely trying to hang on, serve Prabhupada and contribute to purification and change towards the real transcendental message that was being lost, from within the society. I shared in the collective karma of being poisoned simply by so much contact, until I finally walked completely away in desolate despair.

But I was never separated from Srila Prabhupada, even though for many years I could not understand this, and thought that I alone had been rejected by Krsna, that I alone could not be a devotee, because Krsna didn’t want me, nor could I ever please my spiritual master. I couldn’t understand how I had gotten trodden down so far, spiritually, after such dedication to the process for so long. But one day I had a dream. I dreamt that I was in Mayapur temple, chanting in ecstacy, and Tulasi-devi was there, as were two ‘senior’ ‘fixed up’ devotees I knew personally. I woke up still chanting in ecstasy, and didn’t want to quit, and ever since, though I am not yet back to the standard, I always have a taste for chanting if I can get out of sluggishness and lethargy, which I still have to contend with, due to my being a conditioned soul who foolishly tried to take shelter of this material energy some long long births ago.

I thought deeply about the meaning of this dream. I greatly understood that there really was ‘no loss or diminution’. I concluded that those two devotees both fanatical, both so- called ‘fixed up’, and both having a serious case of ‘pure devotee syndrom’, but both had always seemed sincere to me, represented the pride I myself must work to weed out of my heart. I was fully aware that Krsna had just given me the greatest benediction; He literally gave me back the ability to chant, and it was pure causeless mercy. Additionally I learned from this that I am so very much not the doer, and that only, ONLY, by the mercy of the pure devotee, Srila Prabhupada, was I EVER able to chant the Holy Name or engage in any devotional service in the first place, so I have nothing to be proud about. I am fully dependent on his mercy.

And the dream had taken place in the same temple room where I first, for the only time, had Srila Prabhupada’s personal darsan for one Srimad Bhagavatam class.

Well, I hadn’t meant to write all that, but became enlived as I did, so I’ll post it. What I was getting at was that I wanted to show how I experienced the potency of the days you describe, even though outside the temple trying to become a devotee, and that when I finally did come to the temple, the spiritual potency was extremely tangible; the pudding was transcendentally delicious. And that, although that potency appeared to disappear over the years, it was, in the end, only a matter of time before Krsna showed me once again that He was always sitting in the tree with me, and it was only I that had to go through apparent dellusions in order to come to a time of additional purification to be able to taste the transcendental pudding again. And that is still the gift of Srila Prabhupada, and it will be forever, and it is still there, for anyone who reads his transcendental gems, as it always was and always will be. Whenever I drag myself out of lethargy and open the pages I am again swept up in Srila Prabhupada’s embrace. And I also believe that it is only time that separates us from the ‘external’ manifestation of Srila Prabhupada’s divine plan of Krsna consciousness, which includes, but is superior to varna-ashram dharma, for it is the most secret of all secrets, the hightest transcendental Truth. The Absolute Truth.

And what room is there for pride? Since all our devotional service completely depends on the mercy of Srila Prabhupada?

Well, I wrote all that just for me, as it enlivened me, so please don’t anybody think I am speaking with any desire to argue, nor am I actually directing my words at anyone but myself. And thank you Dina for inspiring me to get in touch once again with these most valuable of feelings.

Simply trying to cling to the lotus feet of the devotees, simply hoping that we can come to deeper and deeper levels of transcendental sharing,

ALL GLORIES TO SRILA PRABHUPADA!!!