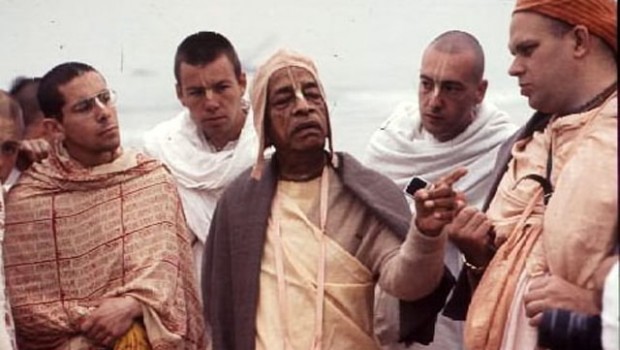 Fortunately Ramesvara kept a detailed diary and used that diary in an interview for the Srila Prabhupada Lilamrta in 1981. It is because of this diary and the Lilamrta interview that Ramesvara’s memories on Srila Prabhupada’s instructions regarding the publication of his books have been very accurately and authoritatively preserved over the years.

Recently some letters from Ramesvara Prabhu have surfaced on the internet which shed a great deal of light on the book changes issue. Here are a few quotes from these letters.

“The Lilamrita interviews I found tell of Srila Prabhupada’s direct instructions regarding the size of the books, the artwork to be kept in the books, etc. – things that have already been changed so many times in the past 20 years, without understanding of Prabhupada’s orders, that it makes the “official” opening of this “change” door more ominous for the future, in ways we can’t even imagine.”

“The analysis with Dravida Prabhu left me with my deepest concern: if the changes didn’t have substantial merit but were made anyway, then regardless of the justification of “making it better” the door, the “change disease” as Srila Prabhupada called it, had been dangerously opened for anything to happen in the future after we are all long gone.”

“…an absolute position has to be reached so that before we die, we know that within the BBT and ISKCON there could never again be one single change, for any reason, ever made to Srila Prabhupada’s books.”

“I have always admitted that my great failure as a trustee was not carefully reading every proposed change, and instead, relying on the endorsement of Hridayananda and Satsvarupa–along with Jayadvaita.”

“I know that in talking years ago with others on that committee [which authorized the printing of the revised and enlarged Bhagavad-gita As It Is], that they also admitted performing only a cursory review of the proposed changes…”

He also exposes the official ISKCON explanation of the book changes, “Responsible Publishing” as being a one sided presentation that ignores Srila Prabhupada’s clear statements and desires as to how his books should be published:

“The problem with the “Responsible Publishing” paper is that it is simply not the entire body of instruction, and it‘s critics point out that it is one-sided and obviously leaves out many of Prabhupada’s cautionary instructions against unnecessary change…

“The “Responsible Publishing” (RP) paper has either a significant misleading or a significant historical inaccuracy. There are sites which claim to list more than 5,000 changes. Certainly there were thousands of changes. The RP paper states that every change to the translations was reviewed and approved by the Trustees, leading ISKCON devotees, the GBC, etc. Later the RP cites or implies in its endorsements that all the changes were approved. Of course, NO ONE other than the editors ever saw back in 1981 or 1982 ALL the changes.”

“No one back then did their job or acted with full responsibility for what they were endorsing. l assure you that NO ONE on that Committee ever even asked to see all the changes, and we would have been astounded to have learned in 1981 or 1982 that there were thousands, maybe more than 5,000 changes. I lazily assumed that the work done on manuscripts as close to the original as possible was the only thing that mattered.”

“I failed to consider all the other Prabhupada instructions, the ramifications for making changes if they didn’t ultimately change the meaning; the effect of changes that in some cases loses the flavor of the Gita we had been studying for 10 years, and most importantly, that breaks the etiquette of changing a Sampradaya Acaraya’s books after His disappearance and opens the “change door” for possible future other changes over the decades and centuries to come. The RP paper implies that the changes were carefully reviewed and approved throughout the leadership of the BBT, GBC and ISKCON.

“I am certain that by interviewing all the leaders of that time, we would find most guilty of the same mistake that i made. It is true to state that the leaders of ISKCON at the time endorsed the changes. However, it is overtly misleading to state or suggest that the leaders actually performed a careful review. And getting back to the fact that there are thousands of changes, no leader, including the BBT Trustees, was ever shown every single change. No one! That is the sad historical fact…”

Ramesvara Prabhu does not accept the BBT’s justification for changing Srila Prabhupada’s books after his departure from the material world:

“I find it embarrassing that on the BBT site, in the section about editing posthumously, the only quote to support touching the works of a departed Acarya is that Srila Jiva Goswami was working posthumously on Bhakti Rasamrita Sindhu. Seriously – how can any living entity compare themselves to Sri Jiva Goswami, or think because he touched the work of Sri Rupa Gosvami, therefore an editor in the lower stages of bhakti, not yet fully situated in the perfected stages of bhava (what to Speak of prema) can touch and change the words of a departed Sampradaya Acarya. Not a good example in my lowly View – it begs the question of What our editors think of themselves and their level of Krsna Consciousness. Oh well…”

Please read the letters for yourself:

One Response to Ramesvara Clears up the Book Changes Issue