True students of the Vedas do not have any respect for modern scien..." /> Science is Wrong About the Age of the Universe | Krishna.org
Big Bang Theory 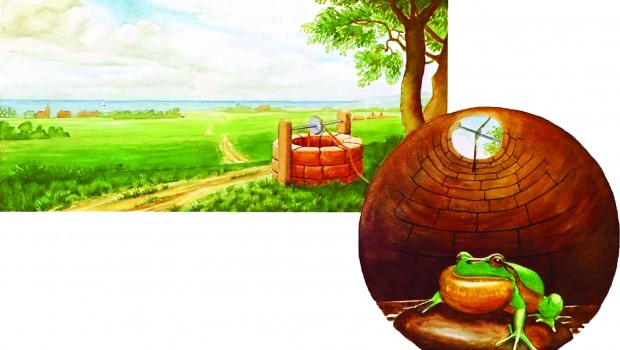 True students of the Vedas do not have any respect for modern science. Scientists use a faulty process for acquiring knowledge.

The “scientific” process of observation and experimentation is flawed because we are very limited in what we can observe. So we can not see very much. Srila Prabhupada gives the example of a frog in a well.

For a frog who has lived in a well for his entire life the well is his universe. He knows nothing outside his well. So he may be greatly learned. He may have studied his well very systematically. He may be able to predict certain things. For example he may have heard the rumbling of the farmers’ machines as he harvests his crops every year. So Dr. Frog can very accurately predict there will be rumblings in a certain month every year. But he can have no conception of what is causing those rumblings. He can come up with theories of course. But he has no conception of fields where grains are grown, he has no idea that the rumblings are caused by the machines the farmer is using to harvest grain. This conception does not exist in the universe of his well. It is beyond the Dr. Frog’s ability to conceive and beyond the ability of his senses to perceive.

Our scientists are just like Dr. Frog. They make many grand statements as if they know everything about everything, but in reality they know nothing about anything…

A good example of this is the age of the universe.

Scientists, pretending to know everything about everything boldly state: “In physical cosmology, the age of the universe is the time elapsed since the Big Bang. The current measurement of the age of the universe is 13.799±0.021 billion years ((13.799±0.021)×109 years) within the Lambda-CDM concordance model.[1][2][3] The uncertainty of 21 million years has been obtained by the agreement of a number of scientific research projects, such as microwave background radiation measurements by the Planck satellite, the Wilkinson Microwave Anisotropy Probe and other probes. Measurements of the cosmic background radiation give the cooling time of the universe since the Big Bang,[4] and measurements of the expansion rate of the universe can be used to calculate its approximate age by extrapolating backwards in time.”

After much mumbling and stating many impressive sounding scientific words they have given us their figure: 13.8 x 109 = 1.5 trillion years.

How does that compare to the actual age of the universe?

Lord Brahma is about half-way through his life at present. And the universe is created by Lord Brahma with the ingredients and intelligence supplied to him by Lord Krishna. There will be a  great dissolution of the universe at the time of the death of Lord Brahma. So how long does Lord Brahma live? That is given conclusively in Bhagavad-gita 8.17:

The duration of the material universe is limited. It is manifested in cycles of kalpas. A kalpa is a day of Brahma, and one day of Brahma consists of a thousand cycles of four yugas or ages: Satya, Treta, Dvapara, and Kali. The cycle of Satya is characterized by virtue, wisdom and religion, there being practically no ignorance and vice, and the yuga lasts 1,728,000 years. In the Treta-yuga vice is introduced, and this yuga lasts 1,296,000 years. In the Dvapara-yuga there is an even greater decline in virtue and religion, vice increasing, and this yuga lasts 864,000 years. And finally in Kali-yuga (the yuga we have now been experiencing over the past 5,000 years) there is an abundance of strife, ignorance, irreligion and vice, true virtue being practically nonexistent, and this yuga lasts 432,000 years. In Kali-yuga vice increases to such a point that at the termination of the yuga the Supreme Lord Himself appears as the Kalki avatara, vanquishes the demons, saves His devotees, and commences another Satya-yuga. Then the process is set rolling again.

These four yugas, rotating a thousand times, comprise one day of Brahma, the creator god, and the same number comprise one night.

Brahma lives one hundred of such “years” and then dies. These “hundred years” by earth calculations total to 311 trillion and 40 million earth years. By these calculations the life of Brahma seems fantastic and interminable, but from the viewpoint of eternity it is as brief as a lightning flash. In the causal ocean there are innumerable Brahmas rising and disappearing like bubbles in the Atlantic. Brahma and his creation are all part of the material universe, and therefore they are in constant flux.

So the universe we are currently in will remain for some 311 trillion years. Already about half of this time has passed, that means there are still around 155 trillion years have passed since the creation of the universe.

Scientists are just like Dr. Frog. They can not see what is happening in the universe. They know only about their small well and have no experience of anything else. These things are beyond the power of our senses to perceive and beyond the ability of our minds to imagine. The only way we can get true knoweldge about material things like the universe and also about spiritual subject matters is by hearing from someone who knows these things in fact.

In the material universe not even Brahma is free from the process of birth, old age, disease and death. Brahma, however, is directly engaged in the service of the Supreme Lord in the management of this universe–therefore at the end of his life he at once attains liberation.

Elevated sannyasis are promoted to Brahma’s particular planet, Brahmaloka, which is the highest planet in the material universe and which survives all the heavenly planets in the upper strata of the planetary system, but in due course Brahma and all inhabitants of Brahmaloka are subject to death, according to the law of material nature.