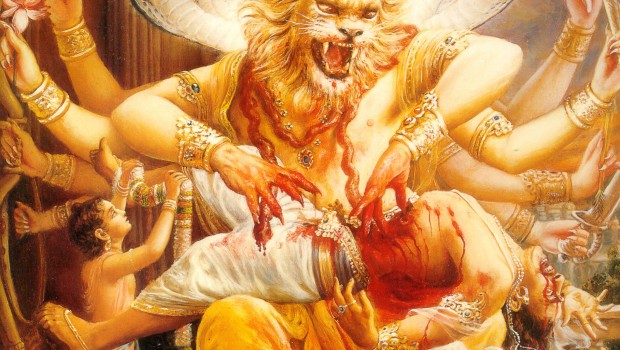 The Appearance of Lord Nrsimhadeva

All glories to Lord Nrsimhadeva the half man half lion incarnation of Lord Krishna. He appeared to save the great saint Prahlada Maharaja from his demonic father Hiranyakasipu.

By performing the rigorous austerity of standing on the tips of his toes for one hundred and twenty five years Hiranyakasipu became so powerful that the demigods prayed to Lord Brahma to keep him from destroying the universe.

After receiving these benedictions Hiranyakasipu became more demonic and began conquering the material universe. With each new victory and increase in his power the Demigods became more and more worried.

In time Hiranyakasipu had a son calle Prahlada. Prahlada was a great devotee of Lord Krishna even from birth. As a small boy of five he would preach about Krishna to his school friends any time the teachers left the room. Prahlada’s preaching infuriated his father, Hiranyakasipu. When his father demanded to know what this foolishness was, what was this Krishna. Prahlada explained that because his father was too attached to his own sense gratification, he was determined to deny Krishna’s existence. Due to this he could not understand even if he took lessons. To understand Krishna one must first give everything to Krishna then Krishna would reveal himself.

Infuriated Hiranyakasipu demanded that Prahlada be trampled under the feet of an elephant. When this also did not work Hiranyakasipu called for his guards to throw Prahlada into a snake pit. The pit was filled with venomous snakes but because Prahlada was study in his faith and continued to chant Hare Krishna the snakes could not harm him.

Since through all this Prahlada was not harmed, Hiranyakasipu thought he must have some mystic power. He pretended to be sorry for trying to harm Prahlada and invited him to lunch. In desperation, Hiranyakasipu poisoned Prahlada’s food, with enough poison to kill hundreds of full-grown men. Rather then eating his food Prahlada first offered it Krishna and it became prasadam and as pure as God and free from all poisonous effects.

When the poisoned food had no effect on Prahlada Hiranyakasipu became so enraged he lifted Prahlada above his head and smashed him to the floor. When Prahlada still was not harmed Hiranyakasipu demanded to know where he got his super human powers from.

Prahlada replied that he got his strength from the same place as Hiranyakasipu did–from God. Hiranyakasipu demanded to know what was this God where was this God. Prahlada explained that God is everywhere that everything comes from God. Hiranyakasipu, despite all that had happened, could not believe in God and began pointing to things demanding if they were God. Hiranyakasipu demanded if God was in a big pillar nearby in the palace. When Prahlada said, “Yes, my Lord is in that pillar,” Hiranyakasipu stated that he would kill Prahlada’s God by using his mace to smash the pillar. As he smashed the pillar Lord Nrsimhadeva, the half man, half lion incarnation of Krishna appeared from the broken pillar and pounced on the shocked demon.

15 Responses to The Appearance of Lord Nrsimhadeva