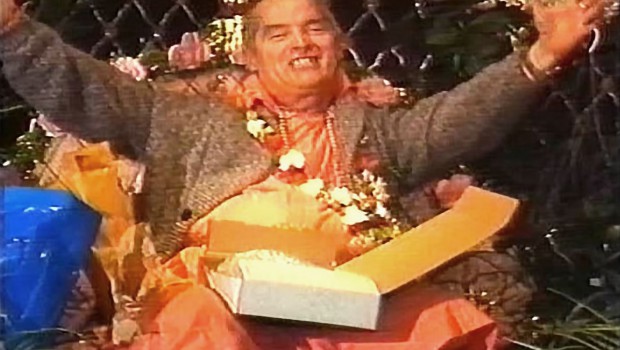 If there are two sides to ISKCON, this is the darker one. It is a side you will only find once you start turning over rocks. Last year, a huge boulder was lifted up, when Dallas attorney Windle Turley filed a lawsuit against ISKCON on behalf of hundreds of children who were abused and raped in an ISKCON boarding school. If it goes forward, it could mean $400 million worth of damages.

If 1977 wasa bad year for ISCKON, 1997 might have been worse. That was the year Nori Muster’s book came out giving, what was for many, a first glimpse of the machinations of the organization. It was also the year several tapes were leaked to ex-ISKCON member Tim Lee–tapes of Prabhupada’s final days on earth. On them, Prabhupada allegedly says several times he is being poisoned.

Lee was kicked out of ISCKON in 1980 for raising questions about the succession of the 11 gurus–whether they were really appointed by Prabhupada. But before they kicked him out, Lee says they offered to make him the guru for Ireland. “When I refused that,” he says, “they said, okay, you just better watch your back then.”

Lee went on investigating, and in 1986, he found out that those threats weren’t empty. On May 22, at 1:00 a.m., his friend Steve Bryant, who was also investigating ISKCON, was assassinated on the orders of GBC guru Kirtananda. In the assassin’s pocket was a piece of paper with Lee’s license plate number. He was next on the list.

Since then, Lee has been on a mission to reform ISKCON. “The GBC is run by a very small, tight group of people,” Lee says, “all the people that were in the room when Prabhupada was poisoned. These guys are all untouchables. You might kick 10,000 or 100,000 people out of ISKCON, but you will never kick these guys out. Never.”

Lee’s discovery of “The Poison Issue” has given him a vast new arsenal in his war on the GBC. He has amassed an impressive amount of evidence suggesting that when Prabhupada died while visiting Vrindavan, India–surrounded by his closest disciples–something was amiss.

“The FBI has said that if this were in America, you guys would have a very good case,” says Lee. “You’ve got a statement from the victim. You’ve got eyewitnesses confirming that he’s saying he’s being poisoned. You’ve got people whispering about poison. One hair at least with some arsenic in it. Something was going on here.”

The tapes have catalyzed reform and splinter groups. (You can listen to them on the internet at https://krishna.org/srila-prabhupadas-untimely-disappearance-update/.) And the GBC has gone on the defensive. In response to the publication of the book, Someone Has Poisoned Me, they put out their own account, Not that I am Poisoned. The war of words continues. And regardless of whether it is ever proven, the fact that so many people are willing to believe it doesn’t bode well for ISKCON. Some have started calling it IS-CON and IT’S GONE.

If there are two sides to ISKCON, this is the darker one. It is a side you will only find once you start turning over rocks. Last year, a huge boulder was lifted up, when Dallas attorney Windle Turley filed a lawsuit against ISKCON on behalf of hundreds of children who were abused and raped in an ISKCON boarding school. If it goes forward, it could mean $400 million worth of bad karma.

“The truth is coming out,” says Lee, “And ISKCON is being reformed by force. Gradually, we are informing rank and file people about what happened. And more and more people are finding out. So it is, overall, catching up with them. The molestation is catching up. The poison case is catching up. All these things–layers and layers of lies–are gradually being unpeeled. It’s just a question of time before they’re fully unpeeled and the whole thing totally caves in. It can’t go on.”