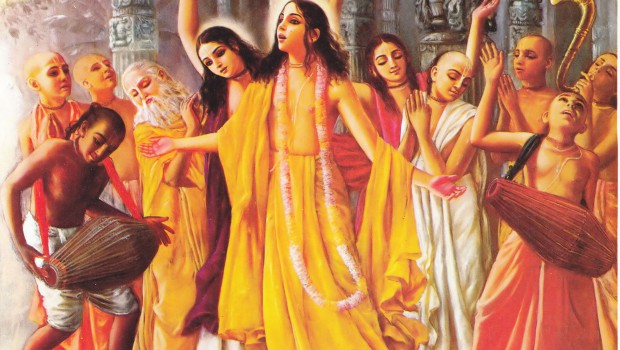 Lord Sri Chaitanya Mahaprabhu appeared during an eclipse on the full moon night of March in Mayapur India about 500 years ago. During eclipses in India it is the custom of the people to go to the holy rivers and chant mantras to invoke auspiciousness.

Thus at the time of Lord Chaitanya’s birth most of the people of India were engaged in chanting the Holy Names of the Lord congregationally. This chanting of the Holy Names would prove to be the mission of Sri Chaitanya Mahaprabhu. This is confirmed by our present guru, His Divine Grace A.C. Bhaktivedanta Swami Prabhupada in one of his great literary works, the Sri Chaitanya-caritamrta, a 17 volume collection of the glories of Lord Chaitanya Mahaprabhu.

It is stated in the 13th chapter text 21 of the Caitanya-caritamrta: “In jubilation everyone was chanting the Holy Name of the Lord–Hari-Hari–and Lord Sri Chaitanya Mahaprabhu then appeared, after first causing the appearance of the Holy Name. At His birth, in His childhood, in His early and later boyhood, as well as in His youth, Lord Chaitanya Mahaprabhu, under different pleas, induced the people to chant the Holy Names, especially the Hare Krishna maha-mantra:

In different ages there are different methods for self-realization such as meditation, temple worship and various yoga practices to control the body and mind. This is the age of Kali-yuga which means that the people are short lived more than in other ages and prone to quarrels over insignificant matters.

Although this age of Kali is considered the worst of the four: Satya, Treta, Dwarpa and Kali; it has some greater benefits than the other ages. One is the all-auspicious appearance of Sri Chaitanya Mahaprabhu. Since He is the color of molten gold He is called the golden avatar, thus this is also called the golden age of Lord Chaitanya.

One of the benefits of this age is that even by thinking good thoughts such as worshipping the Lord in your mind you get the benefit as if you actually did the worship etc. This is called manasa-puja, mental worship. Another benefit of this age is that self-realization is easy. One can become self-realized simply by chanting the Holy Names of the Lord, especially the most powerful Hare Krishna maha-mantra as given by Lord Sri Chaitanya Mahaprabhu Himself.

Lord Chaitanya is described in the encyclopaedia as a great saint who travelled all over India and transcended the caste system; uniting all people as servants of God, Krishna.

Lord Chaitanya appeared like a devotee but He is really Radha and Krishna combined as the incarnation of love.

Lord Chaitanya performing so many miracles. He cured the sick and converted sinful people such as Jagai and Madhai into saints.

This missionary work of Lord Caitanya was taken up by His Divine Grace A.C Bhaktivedanta Swami Prabhupada who, on the order of his spiritual master, came to New York in 1965 and started the Hare Krishna Movement in America. The Hare Krishna movement then spread around the world fulfilling Lord Chaitanya’s desire that the Holy Names spread to every town and village of the world.

Srila Prabhupada departed this world in 1977 but remains spiritually present in his teachings via his books and recorded lectures etc. which will benefit aspiring souls for generations to come. Srila Prabhupada initiated thousands of disciples personally and set up an initiation system whereby he would continue to accept disciples after his departure from our material vision by empowering his disciples to act as priests and perform the initiation ceremonies on his behalf.

Srila Prabhupada’s disciples today are expected to instruct and initiate on behalf of Srila Prabhupada who is giving us the divine knowledge in his books etc..

Due to the prayers of Sri Advaita Acarya, Lord Chaitanya appeared within the womb of mother Sacidevi. When her husband, Jagannatha Misra saw her thus impregnated he said, “I see wonderful things! Your body is effulgent and it appears as if the Goddess of Fortune were now staying personally in my home. Anywhere and everywhere I go, all people offer me respect. Even without my asking, they voluntarily give me riches clothing and food.” Mother Sacimata replied, “I also see wonderfully brilliant human beings appearing in outer space, as if offering prayers.”Jagannatha Misra then replied, “In a dream I saw the effulgent abode of the Lord enter my heart. From my heart it entered your heart. I can therefore understand that a great personality will soon take birth.” (Sri Chaitanya Mahaprabhu)

Today we celebrate the appearance of Lord Chaitanya all over the world by the mercy of Swami Prabhupada. The biggest festival is held near the birthsite of Lord Chaitanya in Sridam Mayapura, India. The International Society for Krishna Consciousness, ISKCON, is headquartered there. Devotees come from all over the world to join in the celebration. George Harrison also showed up occasionally along with other important people of the world.

Srila Prabhupada often said that this mission of Lord Chaitanya’s could bring real peace to the world and indeed was the real United Nations.

5 Responses to The Golden Avatara