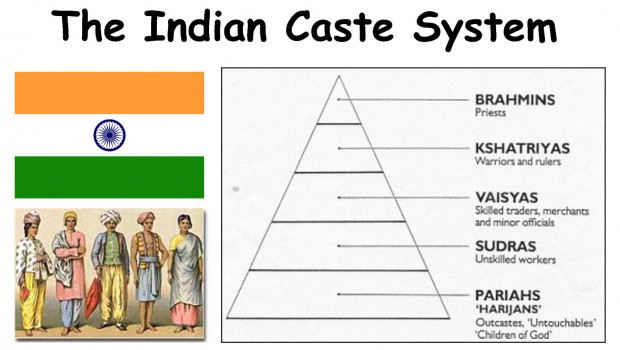 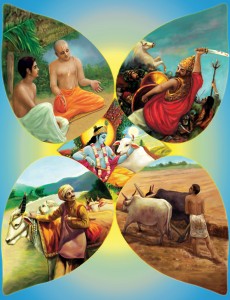 Most of us have heard about the horrible caste system which is now current in India. The current Indian caste system is a perversion of the teachings of Lord Krishna in the Bhagavad Gita:

“According to the three modes of material nature and the work ascribed to them, the four divisions of human society were created by Me. And, although I am the creator of this system, you should know that I am yet the non-doer, being unchangeable.” (Bhagavad Gita 4.13)

So we can see from this verse that in fact Krishna has created four divisions of human society and they are present everywhere in every society, not just in India. Krishna goes on to describe these four divisions of society in the Gita as being brahmanas (the intellectual, priestly class), ksatriyas (the martial class, the kings, rulers, leaders, military men), the vaisvyas (the productive class, principally the farmers who produce and distribute the food and also the businessmen) and Sudras (the worker class who have no ability to support themselves independently like the other three classes so they need to serve the other three higher classes for their livelihood).

The idea that everyone is equal, on the bodily platform at least, is absolutely not true at all. We are all born with different aptitudes, abilities and capabilities. In the West at least there is the illusion that anyone can be successful at anything but in reality this is not true. One will be successful if he works in an occupation that is suited to his natural aptitude, abilities and capabilities. So the system that Krishna recommends in the Bhagavad Gita is called varnashrama dharma, and this system recommends dividing the society into four divisions and in work according to their natural propensities.

In this age the sudras are very, very common. In fact it is said kalou sudra sambavah: “In the Kali-yuga everyone is born as a sudra.” We can see this very easily. The quality of a sudra is that he has no independent source of livelihood, he has to render service to someone else to earn his livelihood. He has to work for a ‘boss’ to get money to support himself and his family. Brahmanas, ksatriyas and vaisyas will never agree to work as a servant of someone else like this. No. The brahmanas have six occupations only: studying the scriptures, teaching the scriptures to others, performing sacrifices and deity worship and engaging others in these activities and receiving charity and distributing charity. So the brahmanas are teachers and they depend on Krishna for their livelihood. Their ‘boss’ is Krishna. So they teach and accept some charity from their students and live simply themselves and also distribute charity to others. The ksatryas have land and levy taxes on the people who live on the land and in that way they get their income and the vaisyas engage in agricultural work and trade and in this way they get their income. It is only the sudras who accept service. So everyone who has accepted some ‘boss’ and is working for him is a sudra because he has no independent source of income.

So you may ask then what is the problem with the caste system in India? In India they have brahmanas, ksatriyas, vaisyas and sudras, so what is wrong with that?

This is what Krishna says here in this verse: catur-varnyam maya srstam guna-karma-vibhavagasah— “I have created four divisions of human society based a person’s qualities [guna] and his work [karma]”. So it is very clearly stated here that a person’s position in the society is based on his actual qualities and on the type of work he performs. This is very logical and we can understand it with our lawyer example very nicely. A lawyer has certain qualities and qualifications. He has to act in a particular way, he has to know the law, he has to act in the way required of him by the courts, and if he is a lawyer then he has to be working as a lawyer — going to the courts and representing clients. If someone is claiming to be a lawyer but he does not know the law and he does not act in the way lawyers act and if his occupation is not working as a lawyer then obviously he is not a lawyer.

And what are the qualities of a brahmana? Krishna also clearly describes them in the Bhagavad Gita (18.42):

“Peacefulness, self-control, austerity, purity, tolerance, honesty, wisdom, knowledge and religiousness — these are the qualities by which the brahmanas work.”

So one who is working as a brahmana and who posses these qualities is a brahmana. It has nothing to do with birth, although birth in an actual brahmana family may create a favorable situation for the child to become a brahmana.

So this insanity of people who do not have the qualities of brahmanas and are not working as brahmanas claiming to be brahmanas simply so they can use that position to exploit others for their own benefit has completely destroyed the whole social system in India.

However because the current caste system in India is totally corrupt and totally incorrect does not mean that there are not actually four classes of men. There are still four classes of men and if the society is to ever be in a position where it is running smoothly again then these four classes of men must be engaged in work according to their natural propensities.