Bg. 8.6) we learn from Kr..." /> The Importance of Remembering Krishna | Krishna.org
Krishna 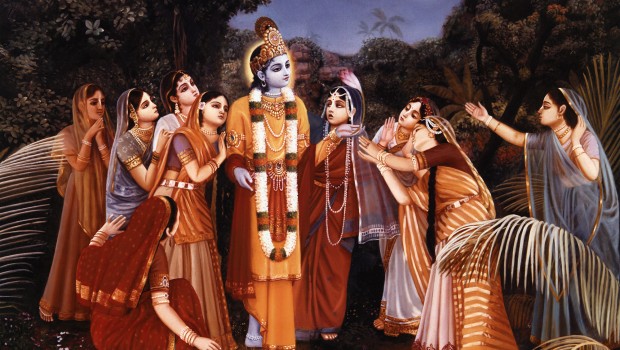 In Bhagavad-gita (Bg. 8.6) we learn from Krishna: Whatever state of being one remembers when he quits his body, that state he will attain without fail.

In the next couple of verses Krishna is giving Arjuna practical instructions that will enable one to remember Him at the time of death:

Therefore, Arjuna, you should always think of Me in the form of Krishna and at the same time carry out your prescribed duty of fighting. With your activities dedicated to Me and your mind and intelligence fixed on Me, you will attain Me without doubt. (Bg. 8.7)

This instruction to Arjuna is very important for all men engaged in material activities. The Lord does not say that one should give up his prescribed duties or engagements. One can continue them and at the same time think of Krishna by chanting Hare Krishna. This will free one from material contamination and engage the mind and intelligence in Krishna. By chanting Krishna’s names, one will be transferred to the supreme planet, Krsnaloka, without a doubt.

He who meditates on the Supreme Personality of Godhead, his mind constantly engaged in remembering Me, undeviated from the path, he, O Partha [Arjuna], is sure to reach Me. (Bg. 8.8)

This is the third verse where Lord Krishna stresses the importance of remembering Him.One’s memory of Krishna is revived by chanting the mahamantra, Hare Krishna . By this practice of chanting and hearing the sound vibration of the Supreme Lord, one’s ear, tongue and mind are engaged. This mystic meditation is very easy to practice, and it helps one attain the Supreme Lord.

The devotees can constantly think of the object of worship, the Supreme Lord, in any of His features, Narayana, Krsna, Rama, etc., by chanting Hare Krishna. This practice will purify him, and at the end of his life, due to his constant chanting, he will be transferred to the kingdom of God.

Yoga practice is meditation on the Supersoul within; similarly, by chanting Hare Krishna one fixes his mind always on the Supreme Lord. The mind is fickle, and therefore it is necessary to engage the mind by force to think of Krishna . One example often given is that of the caterpillar that thinks of becoming a butterfly and so is transformed into a butterfly in the same life. Similarly, if we constantly think of Krishna, it is certain that at the end of our lives we shall have the same bodily constitution as Krishna.

So from these three important Bhagavad-gita verses we learn the importance of remembering Krishna. In our materially contaminated state it is very difficult for us to think of Krishna. We have no attraction for Krishna in the beginning. Because we are attracted by maya. We are in a diseased condition.

23 Responses to The Importance of Remembering Krishna