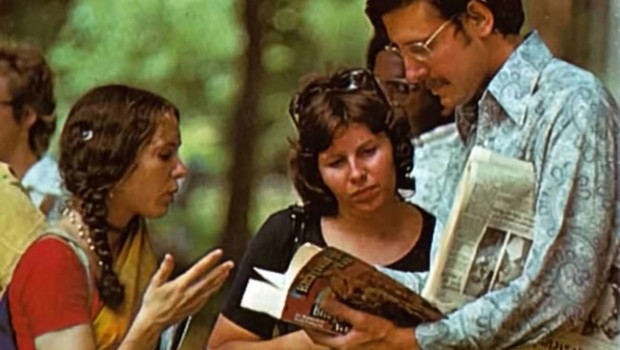 The International Society for Krishna Consciousness 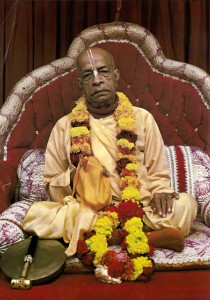 The message of the Vedas, India’s ancient spiritual and philosophical texts, is that the human form of life is meant for reviving our original God consciousness through the practice of spiritual discipline. The International Society for Krishna Consciousness (ISKCON) is a worldwide, nonsectarian movement dedicated to propagating this message for the benefit of mankind. The Society was founded in 1966 by His Divine Grace A. C. Bhaktivedanta Swami Prabhupada, who had come to the United States a year earlier on the order of his spiritual master (Srila Bhaktisiddhanta Sarasvati Gosvami) to teach Krishna consciousness in the Western world.

Over the years, ISKCON has steadily grown in popularity and influence, and today it is widely recognized by theologians, scholars and laymen as a genuine and important spiritual movement. The reason for this is twofold: first, the philosophy which guides the lives of ISKCON’s members is grounded firmly in the teachings of the Vedic literatures, specifically the Bhagavad-gita and the Srimad-Bhagavatam; second, the spiritual master and founder of ISKCON, His Divine Grace A. C. Bhaktivedanta Swami Prabhupada, is a leader of substantial erudition and integrity. As the current representative of an unbroken chain of self-realized spiritual masters, reaching back to Lord Krishna Himself, His Divine Grace is the leading exponent of Vedic culture in the world today. 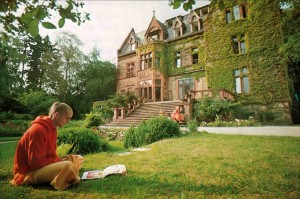 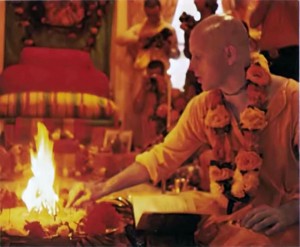 ISKCON is an educational, cultural, and philosophical movement with nearly one hundred centers in thirty countries throughout the world. These centers enable full-time members to live in close association, following the principles of Vedic life, and also provide a place where interested visitors can learn about the philosophy and culture of Krishna consciousness and participate in its various functions.

The members of ISKCON are of all ages, of varying degrees of education, and from many walks of life: students, teachers, scientists, servicemen, laborers and professionals. Indeed, numerous races, creeds and nationalities are represented in ISKCON. The unifying characteristics that bring such diverse individuals to Krishna consciousness are high ethical standards and a sincere desire to understand spiritual truth. As a prerequisite for the serious pursuit of spiritual life, all devotees voluntarily abstain from meat-eating, illicit sex, intoxication and gambling. 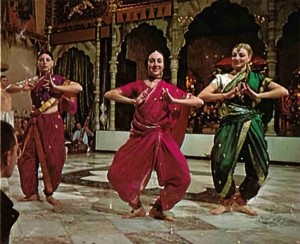 In contrast to the complexity and anxiety of modern life, the Krishna conscious life-style is based on the principle of “simple living and high thinking.” Devotees rise very early–about 4:00 A.M.–and spend the morning hours in meditation and study; attending classes in the profound and practical philosophy of Bhagavad-gita and Srimad-Bhagavatam. Srila Prabhupada’s translations of these two Vedic classics are regarded by many scholars as the most erudite and authoritative available. In the morning hours, the devotees also meditate on the maha-mantra, composed of the following transcendental names of God: Hare Krishna, Hare Krishna, Krishna Krishna, Hare Hare/ Hare Rama, Hare Rama, Rama Rama, Hare Hare. Vedic literature states that this meditation is the simplest and most sublime process for reviving God consciousness in the current materialistic age. 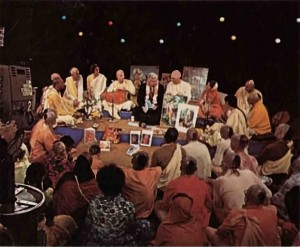 Network TV plays host to Krishna devotees on the David Susskind show. Hundreds of mass-media presentations have familiarized Americans with the practices and views of ISKCON.

During the day, the main activity is preaching Krishna consciousness. Many devotees go out to public places to distribute the Society’s books and its official journal, Back to Godhead magazine, which has a monthly circulation of more than a million copies in thirteen languages. This literature is provided by the Bhaktivedanta Book Trust, the publishing arm of ISKCON, which is the exclusive publisher for the works of His Divine Grace A. C. Bhaktivedanta Swami Prabhupada. Since its inception in 1972, the BBT has quickly become the world’s largest publisher and distributor of English and foreign-language editions of India’s spiritual classics. To date, the BBT has published a total of sixty 400-page hardbound volumes, each profusely illustrated with original paintings by devotee artists. It is principally through the distribution of this literature (as well as by contributions from members and well-wishers) that the Society is financially maintained. 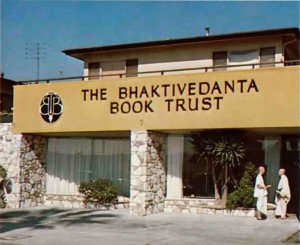 Editorial and graphic arts divisions of the Bhaktivedanta Book Trust are housed in this building in residential Los Angeles.

In addition to book distribution, devotees engage in a wide variety of activities, including teaching, outside jobs, artistic pursuits, and farming. The qualification in Krishna consciousness is not the kind of work one performs, but that it be done in the spirit of devotion to God. As Lord Krishna tells His devotee Arjuna in the Bhagavad-gita, “All that you do should be done as an offering unto Me.” (Bg. 9.27)

Once a year, the members of ISKCON journey to the Society’s international headquarters at Sridhama Mayapur, West Bengal, India. Srila Prabhupada has proposed establishing an Institute of Vedic Studies at this site, where visitors from all over the world can learn about Vedic culture and witness it in practice. Presently the world center includes a large facility for massive distribution of food to thousands of needy families. Another major Indian center is in Vrindavan, the birthplace of Lord Krishna, where the Society has recently opened the magnificent Krishna-Balarama Temple and International Guest House. 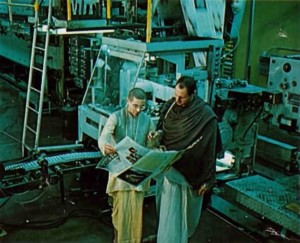 Back to Godhead magazine rolls off the presses as BBT officials check quality of printing. The publication has a monthly circulation of more than one million.

In the United States and other countries, ISKCON has established a series of rural asramas, each a model of Vedic agrarian life. A voiding modern farm machinery as far as possible, they demonstrate that a human being need not depend on the artificial economy of the city. He can live peacefully and simply in the country while pursuing a spiritual life.

For the children of ISKCON there is Gurukula, the Society’s primary and secondary school system. Taught by academically qualified members of the Society, the children learn Vedic language and culture as well as the usual subjects like English, math, and history. The unique feature of Gurukula is that the entire educational process is centered around the goal of self-realization. 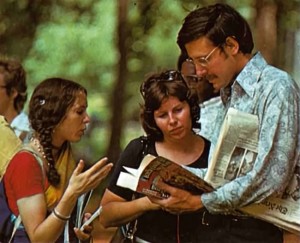 Propagating Krishna consciousness is a major daily activity of ISKCON’s members. Here a devotee shows the Bhagavad-gita As It Is to an interested couple in New York’s Central Park.

ld, the Krishna Consciousness Society has been recognized for its cultural and welfare activities. Mayors and law enforcement officials in major metropolitan areas have praised the Society for its success in helping young people overcome drug dependence. Addictions’ Magazine declared, “Krishna consciousness is close to one hundred percent successful in stopping drug use.” The mayor of San Francisco has proclaimed a Ratha-yatra Day in honor of the spectacular festival held annually by ISKCON. In addition, ISKCON is establishing centers for Vedic studies in several major American cities to enable college students and residents to take courses in Vedic philosophy, religion, arts, social thought and psychology.

Thus the International Society for Krishna Consciousness–a dynamic and effective spiritual movement–is making a significant contribution to the intellectual, cultural and spiritual life of contemporary man. 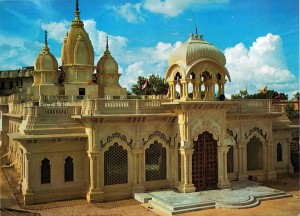 Exquisite ISKCON temple in Vrindavan, India, the birthplace of Lord Krishna, was constructed in 1974 and is already a popular pilgrimage site. International Guest House stands in rear. 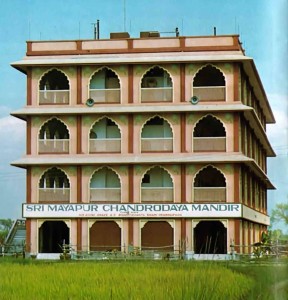 First building of a future city, this dormitory rises above the fertile Ganges plain at ISKCON’s world headquarters in Mayapur, West Bengal, India. 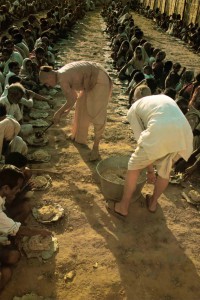 Free food distribution at Mayapur aids Indian families. Col. D. R. Suri of UNICEF declared, “The Society has been rendering a humane service by distributing foodstuff in West Bengal.” Former United States ambassador to India Kenneth Keating said, “You have my admiration and blessings for your selfless work.” 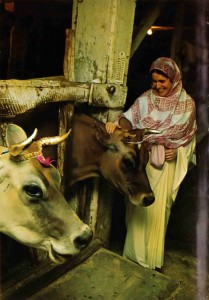 Cow protection, a mainstay of Vedic culture, contributes to the prosperity of ISKCON’s many farm communities. 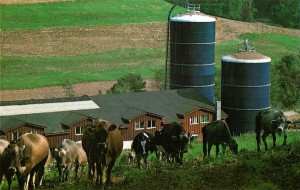 Rolling hills of West Virginia cradle ISKCON’s flourishing New Vrindavan farm. Begun in 1968, it now spreads over one thousanand acres and has over a hundred devoted workers. 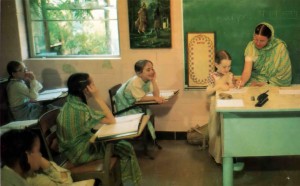 Personalized teaching insures a high standard of education at Gurukula, ISKCON’s primary and secondary school system. In his book Hare Krishna and the Counterculture (John Wiley and Sons, Inc.), Dr. J. Stillson Judah of the Graduate Theological Union says, “The student is taught to be kind to everyone, not to be quarrelsome, to be charitable, clean, benevolent, self-controlled, completely devoted to God and free from material desires.” 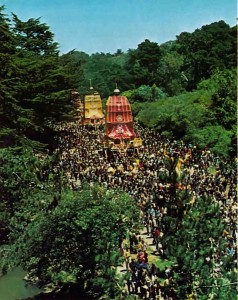 8 Responses to The International Society for Krishna Consciousness