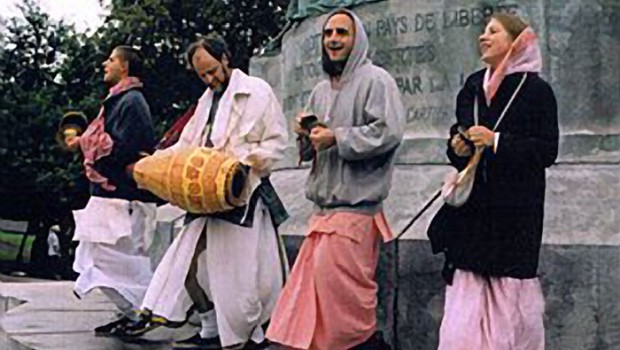 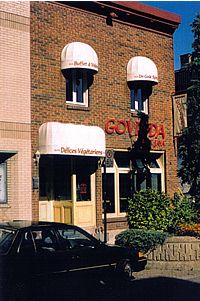 A wonderful transcendental festival took place in Montreal and you are all invited to next years festival. We had some of the best kirtans I have ever been at and I have been at many…

On September 15, 16, and 17th a wonderful transcendental festival took place in Montreal Canada and you are all invited to next years festival, but first let us offer our most humble obeisances to our Living Guru His Divine Grace A.C.Bhaktivedanta Swami Prabhupada, founder acharya for the International Society for Krishna Consciousness. Without his help and guidance at this point in Earth’s history, we would have by now all but destroyed this Great Mother Bhumi whom we also call Mother Earth. We surrender to you oh divine master our lives. We place our minds at your lotus feet. Our obeisances go out to the Supreme Personality of Godhead Lord Sri Caitanya Maha Prabhu and the Panca Tattva for so kindly blessing the city of Montreal with Their presence. We promise to continue this service at the Centre du Prabhupada inspite of whatever difficulties may arise. 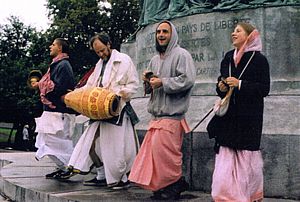 Special thanks to Mahavirya Prabhu for his lead in the street kirtans, his devotional and expertly done renditions of various bhajans, using harmonium and mrdunga. Obeisances to all our God brothers and God sisters at the Montreal Centre du Prabhupada. The cooks, servers, pujaris, clean up crews, accountants and of course our great customers and regular guests.

Our God brothers and God sisters in Montreal lead difficult lives in great pleasure serving Srila Prabhupada what with family and household responsibilities. They went all out to serve the New York Devotees from the Srila Prabhupada Sankirtan Centre with great attention and flare. They supplied the musical instruments and, drums for the best kirtans I have ever been at and I have been at many. Although 1973-4 in Toronto with Utama Sloka and Visva Karma prabhus come a close second. The cooks went way over their normal service with extra Lasagne, magnificent salads, sandesh, sweet rice, mounds of Halava extrodinaire, cooked in ghee, assorted fruit juices, poppers,2 wonderful soups, rice delicate in flavour and loose as puffed. A wonderful eggplant preparation done just right and heavenly spiced so that you got a smile from the guests and not a gag! Kofta balls, a nice tangy stirfry, cheese cake so light it would take four days to settle to store bought consistency. There were three vegies chopped and steamed in a new style cream sauce mmm! Carrot cake, the icing so thick you could build with it. That was just the first day!

Lastly and most certainly not least our most humble obeisances to our Godbrother Nandikesvara Prabhu and his good wife Mandary Prabhu. Without their dedication and never ending service the good people of Montreal would never again have relished this great movement of Lord Caitanya’s and Srila Prabhupada. To all their children who endeavour to care and help their parents in their sevice. Our great thanks to Kania Prabhu and his good wife Rudrani who’s expert assistance and love for Srila Prabhupada has allowed this movement to again establish itself as it should be, there in Montreal. To Arjuna Prabhu, Kania’s son, and his wife Drupadi for supporting the decisions and lending their initial support. If I have missed anyone please forgive me, as we used to say, Krsna knows. 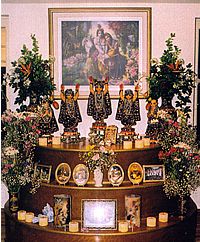 The Centre has a restaurant on ground level and temple room above that. It is a most beautifully done centre overall. The Panca Tattva Dieties are 14 inches high and are carved from nim wood. They have been around the world extensively. Their Lordships are very beautiful. Perfectly done colours, facial design, shape and dress, a perfect high gloss finish adding to their glory transfixes the hearts of all that see them.

Srila Prabhupada sent us from New York City four wonderful representatives from their Srila Prabhupada Sankirtan Contre. Sriman Kapindra Swami, Madhavananda Prabhu, Bhakta Steve and Krsna Devi Prabhu. Arriving late on Friday Sepember 15th at the train station and after some quick thinking on our feet to serve them well, all took rest by 12:30 am. There are not yet facilities for devotees to stay at the centre so all were accommodated a half block away at a first class Bed and Breakfast.

On Saturday we were all up for Mongal Arotika, Tulasi worship, japa class, Bhagavatam class, Guru Puja and greeting the Dieties. Lets not forget the wonderful first class yogurt and fruit breakfasts prepared by Bhakta Hari and Aprakrta Prabhus. 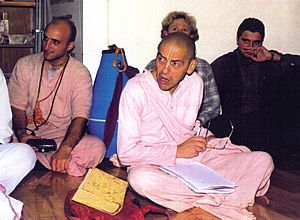 The Bhagavatam classes were the best. The New York devotees were invited to run the morning and evening programmes. At the morning class you first hear Srila Prabhupada on tape and follow along on the transcribed page you are given. After that, all collectively and individually read the sloka, then someone is asked to read the the lecture out loud. After all this there is then discussion and questions. Wonderful! They all love Srila Prabhupada very much and are very expert in their understanding of this magnificent philosophy. To see and hear Kapindra Swami’s great love for Srila Prabhupada and become enlivened by his expert understanding of this philosophy inspires, and brings a tear. The devotees of Srila Prabhupada in New York at the Srila Prabhupada Sankirtan Society are struggling very hard in a joyous mood to serve Lord Caitanya. I urge everyone in the New York State and city to seek them out and inquire about this wonderful philosophy.

From the great Bhagavad Gita As It Is Srila Prabhupada speaks of Arjuna in his Srimad Bhagavatam Canto l, ch. 5 text 32 from the purport: Fight for the cause of the Lord as Sri Arjuna did. In the begining, Sri Arjuna the great fighter, declined to fight but when he was convinced by the Lord that the fighting was necessary, Sri Arjuna changed his decision and fought for His cause. Similarly, if one is a business man, an industrialist, an agriculturist, etc., then one should spend his hard earned money for the cause of the Lord. Think always that the money which is accumulated is the wealth of the Lord. Wealth is considered to be the goddess of fortune(Laksmi), and the Lord is Narayana or the husband of Laksmi. Try to engage Laksmi in the service of Lord Narayana and be happy. In Canto 1 ch 4 text 18 Prabhupada says: “These unfortunate men of this age are always reluctant to give reception to the transcendentalists who are representatives of Srila Vyasadeva and selfless workers always busy planning something which may help everyone in all statuses and orders of life. The greatest philanthropists are those transcendentalists who represent the mission of Vyasa, Narada, Madhava, Caitanya, Rupa, Sarasvati, etc. They are all one and the same, namely to deliver the fallen souls back home, back to Godhead.”

While in Montreal street kirtans, Mongala Arotika, Guru Puja, Tulasi worship and Sunday feast were all recorded on cassette. In the near future they will be available on CD. For more info. contact pss108@juno.com.I am also sending them any photos I took on CD.

Srila Prabhupada says that our Motto of life should be: “One should work hard and worship the Supreme Lord by the fruits of ones hard labour for existence, and that should be our motto of life.” Canto 1 CH 2txt 27. On Saturday.September 16 we of course went out on Hari Nam. Dancing and chanting we covered a large local area. We had to chant on the spot from time to time and wait for mother Krsna Devi to finish preaching to someone and distribute a small book. She was always doing that!

There was a Saturday night programme until 11:30 PM! It was wonderful to say the least. After Arotika, Kirtans,and dancing the feasting started. The long hours included a lecture from Kapindra Swami and very important discussions between devotees and guests. Although the weather was cool and overcast on the Sunday Sept 17 the devotees were again back on the street for Hari Nam Kirtan, led by Montreal devotee Mahavirya Prabhu, an expert musician in his own right. We went to a large local park which is a hangout of sorts for the area. Drummers, jugglers, different hucksters and the Hare Krsnas go there regularly. Some of the local drummers joined us for a nice long kirtan, topped off by an invitation to join us back at the Centre du Prabhupada for DCF, or dancing chanting and feasting. Some got the mercy and showed up. Kapindra Swami gave another nice lecture and amazingly Nandikesvam Prabhu remembered it all in a detailed summary for those only speaking French. Sharp real sharp. Nandi Prabhu led the Sunday Kirtan to an unbelievable level of ecstasy. I prayed it would never end. 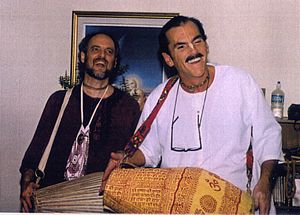 The Sunday feast was another delight, the talks, photo sessions, laughter and always the phrase “more Prabhu? Please take more…” went on and on. The mango strawberry nectar was so rich in flavour and content one cup could, last you 3 days. Before we left the centre on Sunday the New York Devotees presented a 24 CD set of Srila Prabhupada’s Complete works, lectures, morning walks etc. to the Montreal Prabhupada Centre. At that there went up a great cheer, clapping and cheers of Hari Bol! They even gave one to me. After giving thanks to them we offered a monetary gift in return. We left the centre by 9:30 pm in order to be prepared and ready to send the devotees off to New York the next morning. 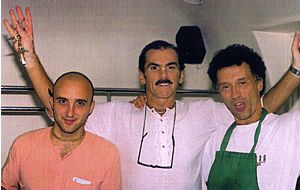 By Monday morning at 4 am I can tell you that I was beat. Kapindra Swami made me morning monitor, my job was to go to the different rooms and make sure all were up. They always were. The last day was the first day that I had to say goodbye to my new godbrothers and sister. A new alliance has now been formed, for us for Srila Prabhupada and for the world. ISKCON is transcendental and was never and never will be under anyone’s control except the control of the Supreme Lord, the Bonified Acharya and his Bonified desciples.

The Prabhupadanugas in New York City, Montreal, Alchua, Seattle, Los Angeles and other areas around the world are independent centres co-operating together; as Srila Prabhupada has said: “The Personalities may be different but the aim of the mission is one and the same–namely to deliver the fallen souls Back to Home Back to Godhead” Next year we are planning the same festival and we are inviting the Prabhupadanugas from Alachua Florida, Kamsahunta and devotees in West Virginia, Yasodanandan Prabhu and devotees from Los Angeles, Damagosh from Seattle and their flock and of course the NEW YORK CITY HARE KRSNA DEVOT’EES. As soon as we get the new Vaisnava calendar we’ll work on some dates. A non holy day with no ekadsi is preferable. Oh,I almost forgot. How could we forget that great soldier Pranjana Prabhu and the devotees of San Fransico? We’ll work on the accommodations, but you’ll have to come up with the fares. At least each centre should sent 2 devotees to the festival for fun and strategy sessions, or the west coast can have their festival, and the east coast theirs. We’ll talk soon so keep your ear to the ground. 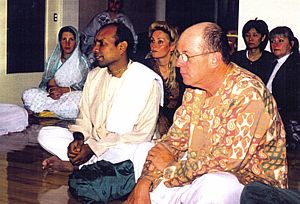 These are primarily festivals to spread love of God through Kirtans and prasadam distribution and original books. We should be in constant touch with each other in our small centres, sharing love of God. Thank you for your most valuable time and association. Everyone is welcome to serve Krsna and Srila Prabhupada. No one is excluded. Keep up the good fight. Serving Radha Ksircora Gopinatha in separation,

Thank you is never enough.