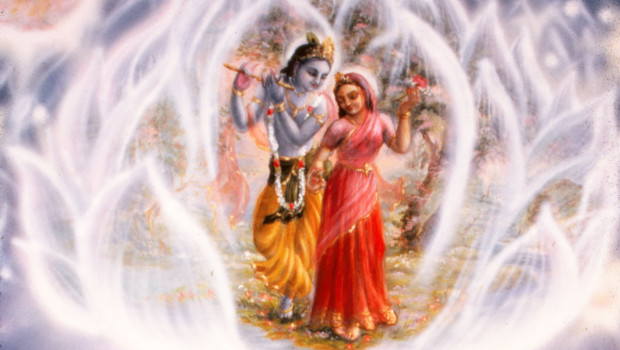 We are constantly being bombarded by materialistic propaganda and it is all reinforcing the material concept of life, trying to convince us that satisfying our senses is the purpose of life. There is virtually no information available to the general public of even the concept that there may be something more than this. Not even any idea that there is even a spiritual energy.

This extreme materialism has created a world full of completely frustrated people. The nature of the material world is there is no real pleasure at all. What we see in the material world is simply a reflection of the spiritual world, and it is in the spiritual world that the real pleasure exists. Of course we can get the idea of pleasure from the reflection. Just like you can get the idea of ripe mangoes on tree if you look at the reflection of that mango tree in the water. But to actually taste the mangoes you need to get them from the real mango tree. Although you can see the mangoes reflected in the water, and you can imagine that those mangoes must taste very nice, if you jump into the water and try to grab the mangoes you will end up with only handfuls of water. This is exactly the nature of this material world. We can see the reflection of love from the spiritual world, and we understand the concept and the feelings, but what we are seeing is simply a reflection, it is not the real thing, it is a reflection of the real thing. This is the cause of all the stress and frustration that the people of the world are currently acutely suffering from.

The people of the world are misidentifying the reflection as the factual truth. And they are trying so hard to enjoy that reflection but there is no real substance in that reflection at all. So everyone’s attempts to ‘enjoy’ in the material world always end ultimately in frustration, disappointment and distress.

The missing point is the people of the word do not know anything of the spritual energy. The do not know of anything at all except the material energy. They know of the gross material elements of earth, water, fire, air and ether and they imagine that everything is produced by a random combination of these material elements…. However the mission of the human form of life is to elevate our consciousness spiritually so at the time of death we can remember Krishna and go to the spiritual world. To achieve this we must be aware of not only the material energy but of the spiritual energy as well.

Whatever state of mind we have at the time of death will determine our next life. If we are fortunate enough to be able to remember Krishna at the time of death then we will be transferred back home, back to Godhead. We will go to Krishnaloka, Goloka Vrindavan, Krishna’s beautiful lotus-shaped planet in the spritual world. There we will regain our original spiritual form and we will posses a completely spiritual body that is eternally youthful, full of knowledge and full of ever-increasing transcendental bliss. That is what everyone is searching for but due to today’s misdirected materialistic civilization they have no information of the spiritual energy at all.

Besides this inferior nature, O mighty-armed Arjuna, there is a superior energy of Mine, which are all living entities who are struggling with material nature and are sustaining the universe. (Bhagavad-gita 7.5)

Here it is clearly mentioned that living entities belong to the superior nature (or energy) of the Supreme Lord. The inferior energy is matter manifested in different elements, namely earth, water, fire, air, ether, mind, intelligence and false ego. Both forms of material nature, namely gross (earth, etc.) and subtle (mind, etc.), are products of the inferior energy. The living entities, who are exploiting these inferior energies for different purposes, are the superior or spiritual energy of the Supreme Lord, and it is due to this energy that the entire material world functions. The cosmic manifestation has no power to act unless it is moved by the superior energy, the living entity. Energies are always controlled by the energetic, and therefore living entities are always controlled by the Lord–they have no independent existence. They are never equally powerful, as unintelligent men think. The distinction between the living entities and the Lord is described in Srimad-Bhagavatamas follows (10.87.30):

The Supreme Lord Krishna is the only controller, and all living entities are controlled by Him. These living entities are His superior energy because the quality of their existence is one and the same with the Supreme, but they are never equal to the Lord in quantity of power. While exploiting the gross and subtle inferior energy (matter), the superior energy (the living entity) forgets his real spiritual mind and intelligence. This forgetfulness is due to the influence of matter upon the living entity. But when the living entity becomes free from the influence of the illusory material energy, he attains the stage called mukti, or liberation. The false ego, under the influence of material illusion, thinks, “I am matter, and material acquisitions are mine.” His actual position is realized when he is liberated from all material ideas, including the conception of his becoming one in all respects with God. Therefore one may conclude that the Gita confirms the living entity to be only one of the multi-energies of Krishna; and when this energy is freed from material contamination, it becomes fully Krishna conscious, or liberated.

43 Responses to There is more than the Material Energy…