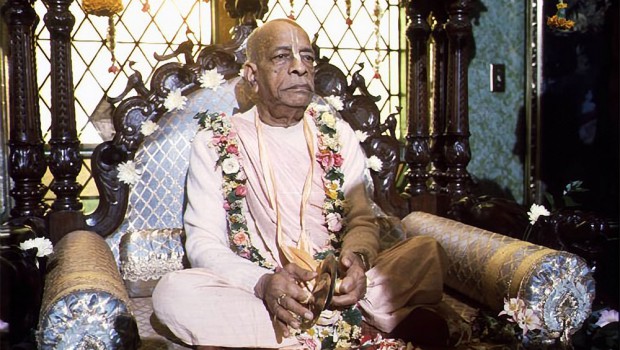 Whatever you have realized, you can say without seeing the book?

But our philosophy is so sound and solid, that we can meet any philosopher of the world, any philosopher. But you have to learn it. The books are there, your intelligence is there, the guidance is there. Because you are preaching, sometimes we have to meet opposing elements. So if you cannot answer properly, that will be disqualification.

Prabhupada: (chants mantras) Who will explain? Karandhara Prabhu, you will explain? First or second. Hare Krsna. (pause) Which one?

Prabhupada: Yes, any one, if you can… Whatever you have realized, you can say without seeing the book. Isavasyam idam sarvam. Yes…

Karandhara: Everything animate or inanimate in this world is controlled and owned by Krsna. In the Bhagavad-gita it is described that there are two types of energies of Krsna, para prakrti and apara prakrti, the superior energy and the inferior energy. The inferior energy is made up of the gross elements, earth, air, fire, water, and the subtle energy or the subtle material elements are the sky…, excuse me, mind, intelligence and false ego. These make up the para prakrti, or the inferior energy of the Lord. But the living entities, they are the superior energy of the Lord. They are apara prakrti; henceforth, due to their illusion, their misconception, they are trying to lord it over the para prakrti, uh, uh, apara prakrti, the inferior energy of the Lord. And they have become entangled. They have become covered by the gross elements. So when one is realizing who the source of the energies, of all these energies are…, who are the proprietor, who are the controller of the energy, then by the Lord’s mercy, the Lord being the controller of all these energies, that entity can become free from the covering, from the influence of the material energy, and can resume his natural constitutional position as superior energy and function on that platform in realization of both energies and his relationship with the supreme energy of the Supreme Lord, Krsna. One should not…, one should only accept that which is set aside for him that which is needed. The lusty desire to gain more, for acquiring more—this lust, this perversion, this misunderstanding is exactly what enamors the living entity, para prakrti, in the inferior energy, apara prakrti. So when one can come to this understanding, that everything is controlled, everything is owned by the Supreme Lord, and that he has no proprietorship, then he can give up this false (conception) of “mine” and “I” and realize that the Supreme Lord, Krsna, He is the controller, He is the owner, and can once again regain his natural, blissful state, sac-cid-ananda-vigrahah [Bs. 5.1].

Prabhupada: Why a living entity is superior energy? Can anyone explain? Why living…? Yes? Stand up.

Devotee: Well, the individual living entities are all part and parcel of the Supreme Lord…

Prabhupada: Separated, and this also, living entities also separated. In this sense. One sense, nothing is separated; but at the same time, separated. But the question is why the living entity’s called superior energy?

Devotee: The living entities are conscious and the material energy’s not.

Prabhupada: Yes, that is also one of the reasons. Living entity’s conscious, whereas the material energy is not conscious. This is one of the… Yes?

Devotee: The living entity is also eternal, unchanging, whereas the material energy is subject to change repeatedly.

This Los Angeles City is valuable so long the living entities are there. The body’s valuable so long the living entity, soul, is there. Therefore it is superior. But that superiority is being misused. That is conditioned life. We are conditioned because our superior position than the matter, we are misusing. How we are misusing? We have forgotten that, although I am superior energy than the matter, but still, I am subordinate to God. That he is forgetting. The modern civilization, they do not care for God because people are superior than matter. They are simply trying to exploit matter in different way. But they are forgetting that we, either we may be American or Russian or China or India, we are all subordinate to God. This is the mistake. Krsna bhuliya jiva bhoga vancha kare. They have forgotten Krsna, and they want to enjoy this material world. This is their disease. Now our duty is to invoke their Krsna consciousness, that “You are superior.”

That’s all right. But you are subordinate to Krsna. You cannot enjoy, but you can… Just like we have decorated this temple not for our sense gratification. What is the difference between our students and ordinary man? They are also decorating their apartment very nicely. We are also doing the same. But the purpose is different. We are doing the same, but the purpose is different. We are doing it for Krsna, and they are doing their for their… So our superiority is that either I am trying for decorating my personal apartment, I am trying to decorate this temple—my superiority is there because I am utilizing matter for my purpose. But when it is utilized, his intelligence is applied to utilized this matter for Krsna, then his life is successful. The superior intelligence should be utilized for the benefit of Krsna. Krsnarthe akhila-cesta. Then your life is successful. Then the same superior energy, if you apply it for your sense gratification, you’ll be entangled and anxiety. And then you’ll have to change your body, one after another. That is going on.

In the Bhagavad-gita, Fifteenth Chapter, fifteenth verse, you’ll find that sarvasya caham hrdi sannivisto: [Bg. 15.15] “I am sitting within the heart of everyone.” Mattah smrtir jnanam apohanam ca. “One can memorize or forget on account of Me.” Therefore the superior energy is giving intelligence to the human form of body that “You do this.” “You do this” means not whimsically. He wanted to do it, but sometimes he forgets, and Krsna reminds, “You wanted to do this. You can do this. Here is an opportunity.” So although I have got superior intelligence, that is also controlled by Krsna. If Krsna gives you intelligence, then you can manufacture this nice microphone; otherwise, you cannot. Therefore isavasyam idam sarvam. In every sphere of life, there is control of Krsna. Yat kincit jagatyam. Anything which is going on within this world, jagat… Jagat means this world, which is making progress. Tena tyaktena bhunjitha.

Therefore we shall have to voluntarily accept His superiority and accept only prasadam, whatever He kindly allows, “You can take this.” “All right, Sir.” That’s all. You cannot encroach upon others. That is superior control. But the people are encroaching; therefore they are becoming entangled. If they accept what is offered by Krsna, then there is no trouble. But if they encroach, then there is trouble.

So you read every sloka, every mantra. Whenever you get time, you read the purport, you read the meaning. The whole philosophy is there. Now you are growing. There will be so many questions, so many philosophers. But our philosophy is so sound and solid, that we can meet any philosopher of the world, any philosopher. But you have to learn it. The books are there, your intelligence is there, the guidance is there. Because you are preaching, sometimes we have to meet opposing elements. So if you cannot answer properly, that will be disqualification. So every one of you should learn this philosophy. As soon as you are able to, I mean to say, guide yourself, or save yourself from the attack of the opposing element, then you’ll know that you are making progress. Otherwise… Of course, there are different stages of devotional life. But so far we are concerned, we have to preach. That is the second platform of devotional life. In the second platform, not only to love God, but to make friendship with devotees who is loving God. That is society. Our Society is devotees. We should not only practice to love God, but we should make friendship and love the devotees also. And then those who are innocent, those who do not understand what is Krsna, we shall preach. And those who are atheist, against God, we shall avoid. So this is second stage. And on the highest stage, of course, there is no… He is paramahamsa. So that, don’t try to imitate paramahamsa. That is very topmost stage of devotional life.

Even if you are on this topmost stage, when you are preacher you have come to the second platform, this stage. So you have to raise yourself from the lower stage to the second stage, and if you are in the highest stage, even then you have come to the second stage for preaching work. So preaching work, four vision. Isvare tad-adhinesu balisesu dvisatsu ca: God, Krsna; His devotee; innocent; and the atheist. So we are concerned with three: with God, the devotees and the innocent. To love God, to make friendship with devotees and to teach the innocent. And those who are atheist, against God, avoid. Don’t talk. Useless waste of time. Whatever he wants: “All right, sir, you are very great.” That’s all right. Don’t talk with them. Simply waste of time. But if one is inquisitive… Just like this child, he wants to learn. As I say, “Oh, offer your obeisances,” he does it. Oh, he should be taken care, very much developed. But that is also one of the offenses, out of the ten offenses. One who is disinclined to understand what is this chanting, you should not bother yourself to convince him. That’s all.

4 Responses to Whatever you have realized, you can say without seeing the book?

Tags: from book, opposition, philosophers, Preaching, without the book

Come Out With Your Samosa’s Up! →

The Order of Caitanya Mahaprabhu–You Must Preach! →