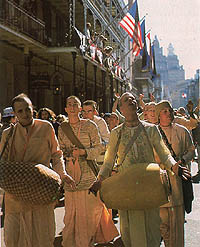 Please accept my respectful obeisances. All glories to our ever present jagat guru Srila Prabhupada!!!

For the pleasure of the Lord, Srila Prabhupada and his devotees I write this report. We had two ecstatic Harinams yesterday taking advantage of Peace gatherings and memorials for last years 911 disaster. Our first Harinam was at the University of Berkeley where thousands were gathered for a peace vigil. We set up right where I used to chant in 1974 with Visnujana Swami and

Sri Sri Radha Damodar. It brought back sweet memories. We purified a lot of spirit souls then and are trying to continue.

Without Visnujana it’s harder but all we can do is try. We chanted with amplification so we could be heard loud and clear far and wide. We set up a book table and passed out Srila Prabhupada’s “Peace Formula” There was alot of smiles and some dancing and the TV crew came and filmed us for the local news. Thousands heard the Holy Name.

Later there was an even bigger memorial gathering in San Francisco.

We set up at a key location and did the same. So many people were protesting politics but none offered a solution like our Srila Prabhupada. So we put in a positive alternative to all of the complaining. Chant Hare Krsna and be happy. After the event ended most of the people and press had to go by us and they all heard the Holy Names. Some asked where have we been. Some said they met Srila Prabhupada in Haight Ashbury in the summer of love 1968. We were happy to see all of the left-over hippies still looking for something higher, we know that’s Krsna.

Overall it was ecsatic as it gets doing the Yajna and I am looking forward to more.

Hope you all have an ecstatic Sri Radhastami celebration and get Her mercy.