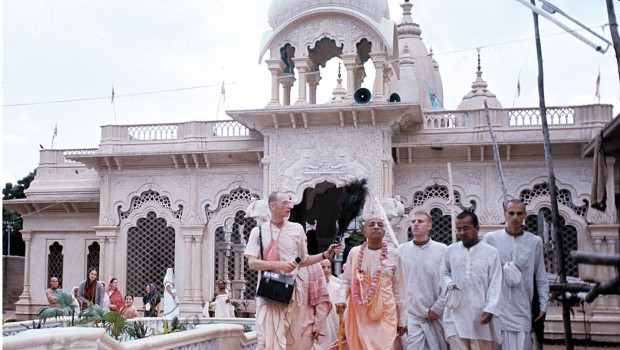 The GBC may have gone for the ‘soft’and financially rewarding target of appealing mainly to Hindus, and lost that sense of universality Srila Prabhupada really taught. Prabhupada taught that we are not Hindu, Muslim or Christian, but eternal servants of God.

In a post on the Lakshmi Sampradaya website it was stated: “When an Al Quida sect was unearthed over 5 years ago in San Diego, plans were discovered to blow up the Los Angeles Hare KRSNA ISKCON temple, guard routines, etc.” If this is true, it is indeed very alarming and unfortunate news. I think we need to look a little deeper as to why the terrorists may be targeting ISKCON temples, and I would say that one reason could be the mistaken policy the GBC pursued after Srila Prabhupada’s departure of linking ISKCON more and more with Hinduism in the eyes of the world.

Srila Prabhupada, of course, has many philosophical differences with mainstream Hinduism, some of the major ones being:

If any of you have ever heard the lectures Srila Prabhupada gave to Hindu audiences, particularly in India, you will know that His Divine Grace would often become extremely stern with them, exhorting them to get back on the right track and not squander the legacy of Vedic culture to which they had been born. Srila Prabhupada often warned against the dangers of nationalism, Hindu or otherwise — this was always one of the main themes of his preaching. He always made a point of differentiating his ISKCON movement from that of Hinduism, although of course he had many friends and supporters in the Hindu community and was always very cordial with them. But he did not want ISKCON to be seen as another branch of Hinduism. I feel that after Srila Prabhupada’s departure, the GBC alienated so much of their Western support that they were practically forced to abandon Srila Prabhupada’s policy with regard to Hinduism and cozy up to it more and more in order to keep the money rolling in to support themselves and their programs. I had always found this to be very dishonest, both to Srila Prabhupada’s legacy and to the Hindus themselves. In protest, I quit subscribing to “Back to Godhead” magazine when it became basically a Hindu magazine. So in light of what Laksmi Sampradaya says about Al Qaeda targeting the L.A. temple, it appears obvious that it has been another grave mistake on the part of the GBC to lead Iskcon away from Srila Prabhupada’s path of keeping a healthy distance from Hinduism. I believe His Divine Grace could foresee the future rise of “Hindu nationalism” and “Islamic terrorism,” a very bad rock and hard place for ISKCON to be caught between.

Your servant and godsister,