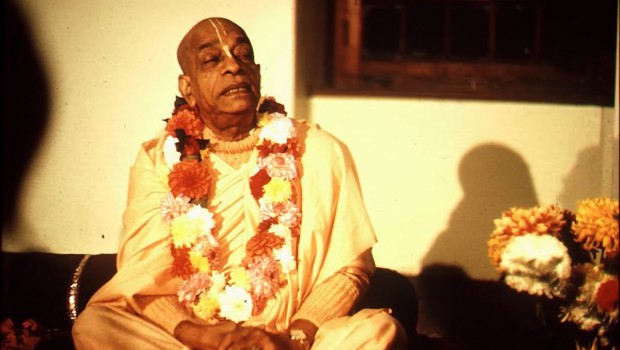 A devotee of the Lord tries to distribute knowledge of Krishna everywhere and, as the world’s greatest philanthropist, he is always concerned about the welfare of the fallen, conditioned souls. He knows that the cause of suffering is forgetfulness of one’s relationship with Krishna, and so he works tirelessly to broadcast the importance of becoming Krishna conscious.

In the opinion of the Vaisnava acaryas, to preach Krishna consciousness is the greatest welfare work, para-upakara. They suggest that if one is actually sympathetic to the plight of a fallen, suffering humanity, he should try to elevate people from material consciousness to spiritual consciousness. The symptom of a compassionate devotee of the Lord, therefore, is that he tries to revive the Krishna consciousness of others and derives happiness when he sees them taking shelter at Krishna’s lotus feet.

Pure devotional service, as taught by Srila Prabhupada and all of the acaryas coming in succession from Srila Rupa Goswami, is transcendental activity (upasana kanda) aimed at pleasing the Supreme Personality of Godhead. That service is unmotivated and uninterrupted and untinged by any desire for personal gain. The other two kandas are jnana and karma, two pots of poison, in the words of Narottama dasa Thakura, because their objective is not specifically to please Lord Visnu. According to the Bhagavad-gita, anything done without the transcendental objective of pleasing Lord Visnu — whether it be sacrifice, charity, or penance — has no spiritual value.

The act of terrorism that struck New York on September 11, 2001, left Americans in a state of shock, but in the aftermath, as soon as they felt assured of their own safety, people began to think of the needs of the victims of the attack and of the families of those who were missing. There followed an outpouring of compassion and kindness but, simultaneously, a patriotic call to arms against the perpetrators of this inexcusable violence. People were giving blood and raising money for the survivors as well as for the children and spouses of those who did not survive. Everyone has tried to do something constructive to help the relief effort, and now the leaders of the Hare Krishna movement want to help the cause by raising money for the Fireman’s Fund.

Srila Prabhupada said that charity is in everyone’s heart, but the problem is that we don’t know how to make the best use of it. As devotees, we should not involve ourselves in acts of charity in the modes of passion or ignorance. Charity should only be given to propagate Krishna consciousness all over the world. That is charity in the mode of goodness. According to the Vedic system, when charity is given, it is always offered to the brahmanas and sannyasis. The understanding is that if the brahmana accepts the charity, the money will go directly to Brahman, or to the service of God. The Vaisnava scriptures confirm that charity should be given to the first class transcendentalist, the devotee. Why, then, should members of the Hare Krishna movement be raising money to give to those who have no concept of devotional service, especially when the need for funds to spread Krishna consciousness is so urgent?

The Srimad Bhagavatam describes the futility of engaging oneself in humanitarian efforts, especially if devotional service to the Lord is neglected. In this regard, Srila Prabhupada explains in the Fifth Canto that suffering and enjoyment are under the jurisdiction of the laws of karma and cannot be adjusted by acts of charity such as those now under consideration:

“It is impossible to improve people’s material conditions. Material conditions are already established by the superior administration according to one’s karma. They cannot be changed. The only benefit we can render to suffering beings is to try to raise them to spiritual consciousness…. If one is at all sympathetic or able to do good to others, he should endeavor to raise people to Krishna consciousness.” (S.B. 5.8.10 purport)

Srila Prabhupada used to say that “Krishna is no poor man,” but that does not mean we should give away Krishna’s property to non-devotees in so-called acts of charity. “As soon as you get money, immediately give in charity to Krishna. Krishna can take your charity as much as you can give.” Devotees are duty-bound to utilize whatever money they receive in charity in the direct glorification of the Supreme Personality of Godhead.

It is not that we are against humanitarian service, but our goal is to develop love of Krishna, not love of pious activity. Pious activities are on the material platform, and on that mundane plane, compassion, lamentation and tears manifest as signs of ignorance of the real self. No one is saying that in the face of tragedy devotees should be callous or heartless. Rather, in all circumstances, we should follow the direction given in sastra and not be falsely directed by sentimentality. In the Eighth Canto, Srila Prabhupada further writes:

“If one has money, it should be used to push forward the Krishna consciousness movement so that all of human society will become happy, prosperous and hopeful of being promoted back home, back to Godhead.” (S.B. 8.19.41 purport)

On Monday evening, September 24th, the New York IRM devotees were invited to a town meeting held in the Great Hall of Cooper Union, a famous historical landmark building in New York City. They were asked to provide prasadam for the nearly nine hundred attendees. These same devotees have been chanting and distributing books, prasadam and Srila Prabhupada’s Peace Formula at the Union Square candlelight memorial for the last ten days. This is the same program that was chalked out by Srila Prabhupada to spread Krishna consciousness throughout the world. The World Trade Center disaster, although certainly a despicable act of envy and hatred, has provided the devotees with a fabulous opportunity to introduce the chanting of Hare Krishna on a grand scale and to distribute the mercy of the Lord to thousands in the form of Krishna prasadam.

There are many ways to utilize one’s hard-earned money in spiritual pursuits. The Hare Krishna movement is in dire need, for example, of a magazine for mass distribution. Rather than giving money directly to the families of New York City firefighters, devotees could use that money to print hundreds of thousands of copies of a specially dedicated edition of Back to Godhead magazine. Similarly, funds donated by our members could jumpstart a major initiative to serve out thousands of plates of prasadam to the residents of New York, the city that Srila Prabhupada said would be conquered by prasadam distribution.

To do something bold to spread Krishna consciousness would demand a much greater cooperative effort and better organization than just raising money and giving it away. The time has come for devotees to do something wonderful to spread Krishna consciousness in America. Beginning in New York, we must pool whatever resources are at our disposal to have the greatest possible impact on the public. This is how we can best please Krishna according to the time, place, and circumstances. To succeed, devotees have to be thoroughly convinced that it is Krishna’s desire to see the world inundated with the sound of the Holy Name, with the taste of Krishna prasadam, and with the knowledge of Bhagavad-gita. The Hare Krishna movement is the vehicle through which this inundation is meant to take place.

If our Krishna conscious leaders think that giving a handout to the firefighters is the best way to improve our public image, the programs at Cooper Union and Union Square Park tell us otherwise. All ordinary charitable works pale in comparison to giving out thousands of plates of full prasadam. If we want to become dear to Krishna, we should use every precious moment to glorify Him and use whatever we have in our possession to spread knowledge about Him. Rather than giving money we should give mercy. Chanting the Hare Krishna mantra and honoring Krishna prasadam will free the conditioned souls from the miseries of material existence and absolve them of all sinful reactions. On the other hand, giving them Krishna’s money might only implicate them further in the cycle of karmic action and reaction if the gift is utilized for sense gratification. In that case, our charitable act would be doing them more harm than good.

Giving in charity can gradually purify the donor, but that benefit should never be compared to chanting the Holy Name of the Lord:

“One who says that ten million asvamedha sacrifices are equal to the chanting of the holy name of Lord Krishna is undoubtedly an atheist. He is sure to be punished by Yamaraja.”   (Cc. Adi 3.79)

And the Vedic scriptures say:

“Even if one distributes ten million cows in charity during an eclipse of the sun, lives at the confluence of the Ganges and Yamuna for millions of years, or gives a mountain of gold in sacrifice to the brahmanas, he does not earn one hundredth part of the merit derived from chanting Hare Krishna.”

A devotee of the Lord tries to distribute knowledge of Krishna everywhere and, as the world’s greatest philanthropist, he is always concerned about the welfare of the fallen, conditioned souls. He knows that the cause of suffering is forgetfulness of one’s relationship with Krishna, and so he works tirelessly to broadcast the importance of becoming Krishna conscious. The cause of happiness is knowing that Krishna is the supreme proprietor of all worlds, the enjoyer of all sacrifices and the friend of all living beings. Armed with this knowledge, the devotee knows exactly how to dovetail everything and engage everyone in Krishna’s service. He always adheres to the instructions given by the spiritual master and is never carried away on the waves of sentimentality. Because of his magnanimity, the devotee who dedicates himself to preaching Krishna  consciousness is assured of going back home, back to Godhead.

3 Responses to On Giving in Charity