"A person who neither rejoic..." /> The Symptoms of a Self-Realized Person | Krishna.org
Spiritual Master / Guru 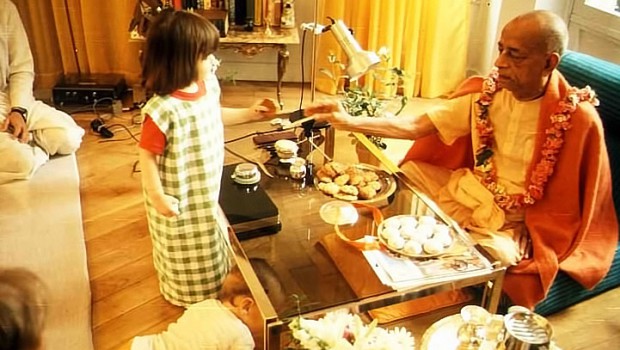 “A person who neither rejoices upon achieving something pleasant nor laments upon obtaining something unpleasant, who is self-intelligent, unbewildered, and who knows the science of God, is to be understood as already situated in Transcendence.” (Bhagavad Gita 5.20)

The first symptom of a self-realized soul is that he is not illusioned by the false identification of the body with his true self. He knows perfectly well that he is not this body, but is the fragmental portion of the Supreme Personality of Godhead. Therefore he is not joyful in achieving something nor does he lament in loosing anything which is related to his body.

We have all heard it, “You’re not this body, you’re the spirit soul.” And we know it, we may be preaching it to others also, “You’re not this body, you’re the spirit soul…” So intellectually we know this and believe it, but realizing it is another thing. The main quality of a self-realzed person is that he has realized that he is not the body but he is the spirit soul within the body. That is self-realization. Because we are under the misconception that the self is the body and under this misconception we are working very hard to try to satisfy the senses of the body under the mistaken presumption that if we can satisfy our senses then we will be happy. This misconception is only possible for one who is not self-realized, one who has not realized that he is not the body but spirit soul.
When we realize that we are not the body we will no longer have any desire to satisfy the senses of the body. The body is not ours actually, it is Krishna’s, it is given by Krishna, and like everything that belongs to Krishna it should be engaged in the service of Krishna. So we have to look after the body, maintain it, keep it clean, provide it with food, etc, so that we can use the body effectively in the service of Krishna.
But if we find ourselves trying to satisfy the senses of our body by getting nice food to enjoy, by trying to find sex partners, by trying to get very comfortable arrangements for sleeping and a very strong defense system we can know it for sure that we are not self realized. The animals are working for these four things: eating, sleeping, mating and defending — these are the animal propensities. So if in our life we are very concerned with the same eating, sleeping, mating and defending then we are no more than two-legged animals.
Human life is not meant for improving the standard of eating, sleeping, mating and defending. No. We should live very simply and spend our time and energy for spiritual advancement. That is the special quality of the human form of life. We have the ability to question the purpose of our existence and also to discover the answers.
“The humble sage, by virtue of true knowledge, sees with equal vision a learned and gentle brahmana, a cow, an elephant, a dog and a dog-eater [outcaste].” (Bhagavad Gita 5.18)
A self-realized person is so much detached from the bodily concept of life that he does not make any distinction between species or castes. The brahmana and the outcaste may be different from the social point of view, or a dog, a cow or an elephant, may be different from the point of view of species, but these differences of body are meaningless from the viewpoint of a learned transcendentalist. He sees them all in their relationship to the Supreme Lord, for the Lord by His plenary portion as Paramatma is present in both the outcaste and the brahmana, although the body of a brahmana and that of an outcaste are not the same.
The bodies are material productions of different modes of material nature, but the soul and the Supersoul within the body are of the same spiritual quality. This similarity of the soul and the Supresoul, however, does not make them equal in quantity, for the individual soul is present only in that particular body, whereas the Paramatma is present in each and every body. A Krishna conscious person has full knowledge of this, and therefore he is truly learned and has equal vision.
As long as one identifies with the material body he is considered a conditioned soul but as soon as he actually realizes he is not the material body but the eternal spirit soul within the body he is liberated from conditional life, in other words he is no longer subject to take birth in the material world but can enter into the spiritual sky after death.
“Such a liberated person is not attracted to material sense pleasure or external objects but is always in trance, enjoying the pleasure within. In this way the self-realized person enjoys unlimited happiness, for he concentrates on the Supreme.” (Bhagavad Gita 5.21)
Sri Yamunacarya, a great devotee in Krishna consciousness said: “Since I have been engaged in the transcendental loving service of Krishna, realizing ever-new pleasure in Him, whenever I think of sex pleasure, I spit at the thought, and my lips curl with distaste.”
A person in Krishna consciousness is so absorbed in the loving service of the Lord that he looses his taste for material sense pleasure altogether. The highest pleasure in the material world in terms of matter is sex pleasure. The whole world is moving under the spell of sex and a materialist can not work at all without this motivation. But a person engaged in Krishna consciousness can work with greater vigor without sex pleasure, which he avoids.
This is the test of spiritual realization. If we are still attached to sex life then we are not spiritually advanced. Spiritual realization and sex pleasure do not go together. A Krishna conscious person is not attracted to any kind of sense pleasure due to his being a liberated soul.

Krishna continues to discuss the symptoms of a self-realized person in more detail in the Fifth Chapter of Bhagavad-gita. If you do not have it please get it and read it.

68 Responses to The Symptoms of a Self-Realized Person