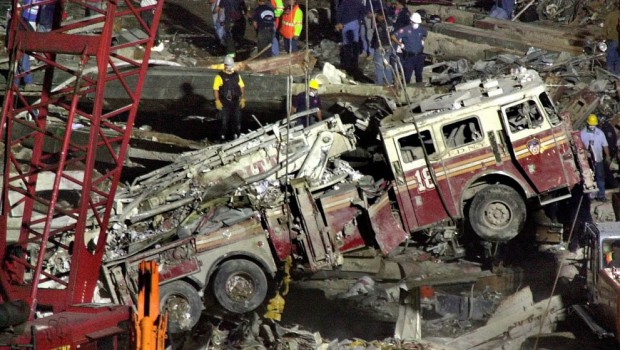 Although I appreciated everyone’s kindness, and cooperation, I couldn’t help but think of how nice it would have been if prashadam was being served, instead of McDonalds harmburgers. And it would have been so nice if there could have been kirtan, to help encourage the weary, sometimes depressed workers (one of my services was to provide counseling).

I just wanted to share a realization that I am sure many devotees have had in the past and especially at this time. Recently, I took part as a volunteer to help provide medical care for mostly the fireman, and other recovery workers at the World Trade Center, at ground zero. Sadly, there were not many victims needing help because most of the people died during the collapse of the buildings. To see the twisted remains of the epitome of “sky-scrappers” was both overwhelming and frightening. I personally saw and felt how horrible the sight was and how even after many days the remains were still on fire. Unfortunately, after the day following the tragedy, only body parts were being recovered.

While I was there, I noticed how kind everyone was to each other, and how much appreciation was shown towards all volunteers by the people on the street. While entering, or leaving the barricaded areas of ground zero, many onlookers were applauding even workers who were walking alone or with other volunteers, and it didn’t matter how important, or how small the volunteer’s service was. Everywhere there were food stations, and people manning these stations were personally offering food to the volunteers; fruit, water, Gatorade, candy, etc.

Although I appreciated everyone’s kindness, and cooperation, I couldn’t help but think of how nice it would have been if prashadam was being served, instead of McDonalds hamburgers. And it would have been so nice if there could have been kirtan, to help encourage the weary, sometimes depressed workers (one of my services was to provide counseling).

Consequently, it was very inspiring to read about the efforts and support for the victims of the tragedy, by devotees in Utah, and N.Carolina. This is an opportunity for devotees of Lord Krishna to provide real (spiritual) welfare work for the suffering souls of even the greatest(materially speaking) nation on this planet. After all, aren’t the Vaishnavas called “kripa-sindhu” in our daily prayers?

Moreover, while contemplating the ramifications of this tragic event, it also occurred to me that I had read some reports in the past on CHAKRA, and elsewhere, of how the Taliban in Afghanistan had been harassing people of different faiths, including devotees of Lord Chaitanya’s Sankirtan Movement. Now they have incurred the wrath of the United States. Maybe Krishna is going to punish the Taliban for their offenses against devotees, through the actions of the U.S. and other nations who will join against terrorism.

In conclusion, I would just like to express my appreciation for all Prabhupadanugas who are preaching Lord Chaitanya’s sankirtan movement around the world, whether in times of apparent calamities and in times of peace. They are performing the ultimate welfare work, and thus are very dear to the Lord. Hare Krishna. All glories to Shrila Prabhupada.

2 Responses to World Trade Center Disaster–Why Weren’t We There to Help?