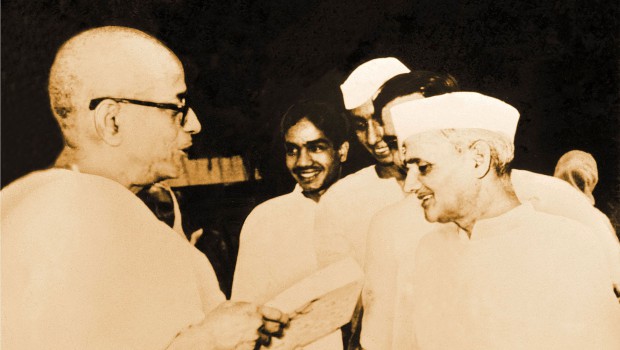 In America they would have said, ‘Hey, what are you doing. Get out of my car.’ Possibly beat you. In India, still there is some culture. In India they see a sadhu and they have some respect. But in your country they kick you out.

Before Srila Prabhupada’s quarters were available in Juhu he stayed at one life member’s flat. His name was Kartikeya Mahadevia. The facilities there were nice and Srila Prabhupada seemed comfortable. Every morning Srila Prabhupada, Shyamasundara dasa and I would take Kartikeya’s car, an Ambassador, and head towards a waterfront area for walking. The pavement was very wide and uncrowded. One day while walking we passed a man laying down at the edge of the sidewalk. This was a somewhat common sight on the streets of Bombay. On the way back we passed him for the second time. Srila Prabhupada turned to us and said, “See that man lying there? He is dead.” Srila Prabhupada continued walking without further comment.

Once, when we got back to the car, Shyamasundara could not get the key to work in the ignition. He tried for several minutes. He said, “Srila Prabhupada, something is wrong. This is not going to work. I’ll go get a cab.” He ran off leaving Srila Prabhupada and I sitting in the back seat of the car. After a few minutes two well dressed Indian men opened the car doors and sat down in the front seat of the car. I became frightened. Srila Prabhupada started talking to them in Hindi and appeared very calm. There was even a smile on his face as he conversed with them. Suddenly, they put their key in the ignition and the car started right up. They began to drive away.

I finally realized that we had been sitting in the wrong car. This is not so hard to imagine. Twenty five years later the Ambassadors still look alike. The gentlemen insisted on taking Srila Prabhupada back to his flat. Srila Prabhupada spoke to them the entire ride. He said, “We are sorry.” They said, “No problem. We’ll take you back to where you are staying.” They drove us back into town. When we arrived Srila Prabhupada said, “You can come up and take prasadam.” They replied, “No, we have to go to work. We have business meetings. Thank you very much, Swamiji.”

After getting out of the car Srila Prabhupada said to me, “This is the difference between India and America. In America they would have said, ‘Hey, what are you doing. Get out of my car.’ Possibly beat you. In India, still there is some culture. In India they see a sadhu and they have some respect. But in your country they kick you out. They say, ‘Get out of my car.'”

It is interesting to note that even in this situation Srila Prabhupada tried to get them to take prasadam. This is something I saw on countless occasions. Srila Prabhupada wanted to see that everyone he came in contact with received prasadam.

All Glories to Srila Prabhupada!

6 Responses to Difference Between India and USA