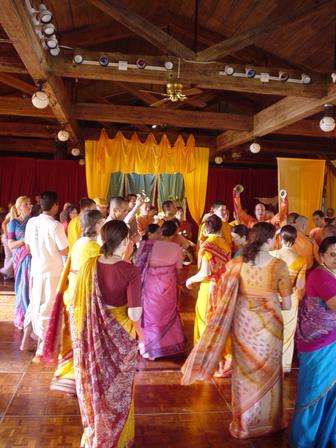 The group of devotees were featured in a scene involving a rousing kirtan held at a Krishna Temple, with a few select devotees also being used in other scenes for the movie. The production will be in theatres by next winter.

The film, entitled “Bee Season”, is based on the popular novel of the same name, written by Myla Goldberg. In the story, Richard Gere plays the father Saul, who absorbs himself in the study of Jewish Mysticism. His daughter Eliza (played by young newcomer Flora Cross), becomes a national spelling bee champion. This event starts to dramatically alter the family’s comfortable existence. Saul soon begins to lavish time and affection on the blossoming Eliza, leaving his son Aaron desperately searching to find a replacement for the connections to his father and his Jewish faith.

First-time actor Max Minghella, son of “Cold Mountain” director Anthony Minghella, plays the part of Aaron. Now Aaron embarks on a type of spiritual vision quest, which leads him to meet Kate Bosworth’s character Chali, who is a Hare Krishna devotee in the film. He becomes curious about her chanting the Hare Krishna Mantra on japa beads, and begins to ask her questions about the philosophy. I overheard Kate rehearsing some of her dialogue off-set, and I heard, “There are many names of God. We call Him Krishna”. She later takes Aaron to the temple, where they join the devotees for an ecstatic kirtan!

How it all came about 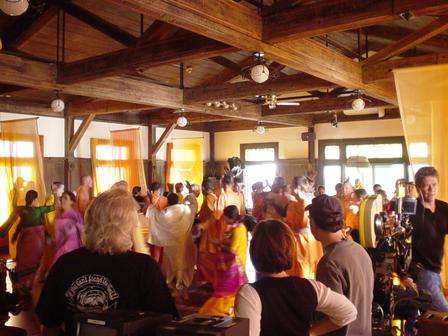 The film crew initially contacted Grantharaja dasa from the Bhaktivedanta Institute at the Berkeley Krishna Temple. He in turn put them in touch with Gadadhara dasa, a recent graduate of San Francisco State’s Cinema department. Gadadhara dasa then busily set out to coordinate an incredible mountain of legal and logistical details! Everything from casting to costume design to choreography was amazingly pulled together by this hard-working devotee. He even drove all the way to up to Redwood Valley in Mendocino County to bring a beautiful Murti of Srila Prabhupada down to the film set. On Thursday before the film shoot, he and I prepared an enormous amount of prasadam to be distributed to the film crew the next day. We brought lots of Krishna books to distribute as well.

A week or so before the film shoot, Gadadhara dasa even arranged for Max Minghella, Kate Bosworth and others to meet with Hansadutta dasa, and hear from him all about Krishna Consciousness. They listened with rapped attention for over an hour and a half, being mesmerized by his expert preaching. Later they took Krishna prasadam. It was clear that they were very profoundly affected by his explanations of the chanting, the philosophy and the science of self-realization. On the day of the film shoot, I spoke with Cristina Solletti a legal clearance/Krishna devotee liaison on the crew, who commented, “Until we all got to meet with Hansadutta, no one had ever been able to so clearly articulate to us what Krishna Consciousness actually is. He made it so easy for us to understand the philosophy. It was just amazing”.

Devotees on the Set, “Lights, camera.action!”

The actual filming of the kirtan scene was a fascinating experience for the devotees, and a very powerful experience for the film crew. Before the cameras rolled, we were summoned onto the set for a rehearsal kirtan. Locannath dasa from Berkeley did a wonderful job leading our kirtans for the filming, and as soon as we started chanting the Hare Krishna Maha-mantra, we noticed a change in the atmosphere on the set, and in the attitudes of the film crew.

After about two or three minutes of kirtan, the dual-directing team of Scott McGhee and David Seigel (who previously directed “The Deep End”) stopped everyone, looked at each other and commented, “Wow, that’s really powerful. This is going to be a great shoot!” They later commented, “Your spiritual practice of chanting Hare Krishna is the most beautiful thing we have ever witnessed. Outside of some very basic choreography that we need from you, whatever you naturally do, just go for it. We want you to really let go!” And, that’s just what we did. It was completely ecstatic. We actually saw a lot of the crew members chanting and dancing along with us from behind all the props and equipment!

One really interesting thing that happened for the crew was their observation of the natural tendency for the men in the kirtan party to gravitate to the center, and for the women to remain around the outside. They stopped us a couple of times, and tried to get us to evenly mix and mingle the men and the women. One devotee commented, “You can’t change nature”. I spoke with Kate Bosworth several times on the film set, and she told me, “Wow, I never realized how fun the chanting and dancing could be. No wonder the devotees are always so happy when I see them out chanting in the streets!” For those of you who don’t recognize Kate’s name as an actress, she played the blonde surfer in the film, “Blue Crush”. I later gave Max and her some japa beads, a book on Kirtan, and then I let her choose which style and color of bead bag she wanted from an assortment I brought from Vrindavan India. Upon this, she commented, “Now I want to go to India!” I encouraged her to definitely go if she finds the time between her many movie projects.

As mentioned earlier, some devotees got to be on the film set for two whole days, because they were cast in some other scenes for the movie besides the kirtan scene. Kuvalesaya dasa, who came all the way up from Los Angeles, was cast in a scene where he meets Richard Gere, who asks him directions to the temple. Other devotees who were cast in small scenes included Laxshmi devi dasi, Krishna Priya devi dasi, Abhaya dasa, and bhaktas Chad, Paul and Ian, who played background pedestrians and car drivers.

At the end of day two’s filming, several members of the film crew unanimously commented to the devotees that, “Your presence here and your chanting scene has not only been the most fun for all of us, but it has been the most incredible part of the entire movie!” It was truly a wonderful opportunity for us to be able to meet, talk with and preach to this very nice film crew. I saw many of them on several occasions reading Srila Prabhupada’s books. They were all very respectful, pious people, and they clearly appreciated the chance to intimately spend time with so many devotees. We were all grateful for the chance to spread the Holy Names of Krishna through the medium of a motion picture. We can only hope that the editors don’t cut out too much of our all-too-brief scenes for this film! In conclusion, I’d like to mention that it was clear to all of the devotees that this event was the direct arrangement of Krishna. We agreed that “we were not the doers” of anything. As Lord Krishna says in Bhagavad-gita, “I am the ability in man”. Ki Jaya!

Hare Krishna, and All Glories to Srila Prabhupada.